by Anna Cheney 25 days ago in movie review

I have always been particularly intrigued by films whose beginnings contrast with their endings in terms of both tone and themes. If there is a genre that I have explored the least thus far, it is war, but Stanley Kubrick’s Full Metal Jacket is much more than a war film; it presents themes which illustrate the psychological anguish that comes with serving in the military.

First and foremost, this film’s characters all comprise a spectrum, and each represent different coping mechanisms throughout the hardships. Consider Private J. T. “Joker” Davis and Private Leonard “Gomer Pyle” Lawrence, for example: Joker is a charismatic young man whose capabilities in boot camp seem to come to him naturally, meanwhile Pyle takes much longer to find his own, supposedly due to being overweight. Despite these two characters belonging to polar opposite sides of this spectrum, they do have one thing in common, along with every other man who is present on Parris Island with them—none of them are there willingly. These men were drafted in the wake of the Vietnam War, and are given no other choice but to defend their country, even if it costs their lives in doing so. Not only are they tormented with the incessant reminder of their mortality as they train in boot camp, but they are scorned relentlessly by Gunnery Sergeant Hartman, the camp’s harsh drill instructor. Regarding the contrast shown in the beginning, Hartman plays a major role in the comedic effect that will later be canceled out in one clean sweep. Hartman is infamous for the insults he spews at the men—which were mostly improvised by Lee Ermey himself—and some of them are so absurd that you cannot help but laugh. In his opening monologue, he says, “You are the lowest form of life on Earth. You are not even human fucking beings. You are nothing but unorganized grab-asstic pieces of amphibian shit! Because I am hard, you will not like me. But the more you hate me, the more you will learn. I am hard, but I am fair.” For the first hour or so, you watch this group of young men barely out of their adolescent years, and while the absurdity of the training and verbal abuse which they endure can be perceived as humorous, there is one thing keeping the film from becoming a satire about the military during this time period: Private Pyle. 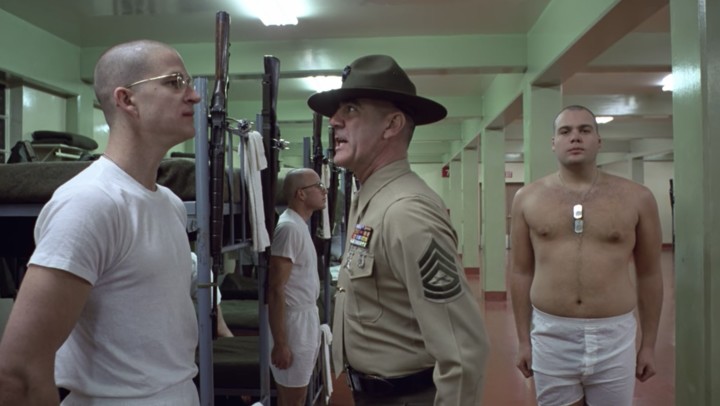 Unlike Joker and the rest of the platoon, Pyle has a difficult time easing into his foreign surroundings, and is chagrined by the torment inflicted upon him by Hartman's vulgar words. Vincent D’Onofrio’s performance effortlessly depicts the gradual insanity of his character as he makes his way through military training, and that is when the comedic elements that were established earlier begin to dissipate into thin air. Once Pyle finishes his training alongside the others and is assigned to Infantry, there is finally a discernible spark of hope for him—but it quickly loses its faint glint when Joker discovers him enduring his final breakdown in the bathroom, loading his rifle. Hartman is awakened by the commotion and goes to find out what is happening, but before he can do anything to stop Pyle from misusing his rifle, he is shot dead. You expect him to take Joker’s life as well, but he spares him, instead using his next bullet to shoot himself in the head. This is a sign of humanity in Pyle, evincing his sincere fondness of Joker for walking him through his time on Parris Island, despite his participation in the locksocking incident against him. This abrupt turn of events is enough to shake the viewer up, as it transpires just as you are finally adjusting to the lighthearted tone. However, subsequent to such an occurrence within the story, you are welcomed to the platoon’s new, more laid-back setting in Da Nang. 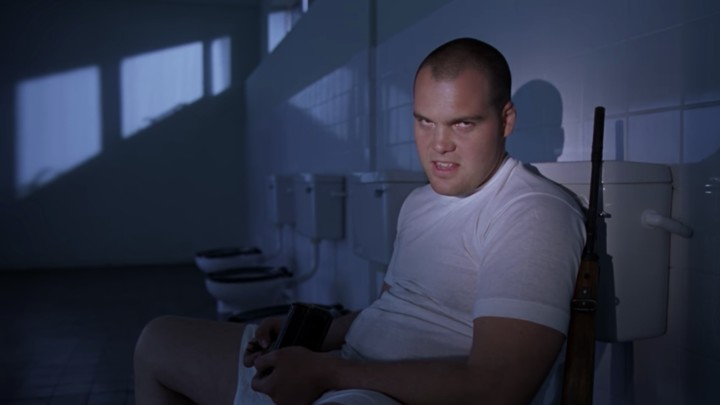 Admittedly, I used to prefer the first half of the film over the second. I am thankful for having rewatched it because it has allowed me to build a significant amount of appreciation for the latter, and now I love both about equally. Furthermore, I criticized the fact that Private Pyle is never mentioned again following his demise—but my revisitation made me realize that it offers necessary relief to the audience as it rolls into the second half. Most of it is spent introducing other soldiers in Vietnam, namely Animal Mother and Doorgunner, who slowly lighten the tone that the events are told in again (the men lounging around at their camp and pursuing sexual encounters with Vietnamese women to kill time, for example). It sheds just the appropriate amount of light on such a grim situation where the lives of beloved characters are put on the line, and avoids suffocating you with fear as you watch their side of the Vietnam War progress on-screen. Kubrick tampers with the balance between sentiments that the film evokes in you, but never does so in excess to where it can be considered emotionally-manipulative—in fact, the storytelling in general is rather dry, and that is what makes the narrative so appealing to me personally. If a film makes blatant attempts to enrich its story by conflicting my emotions, more often than not, it simply becomes an obnoxious diversion from the message it wants to convey. Full Metal Jacket lets you attach yourself to the characters on your own, and that makes the ultimate visceral impact all the more lucid. 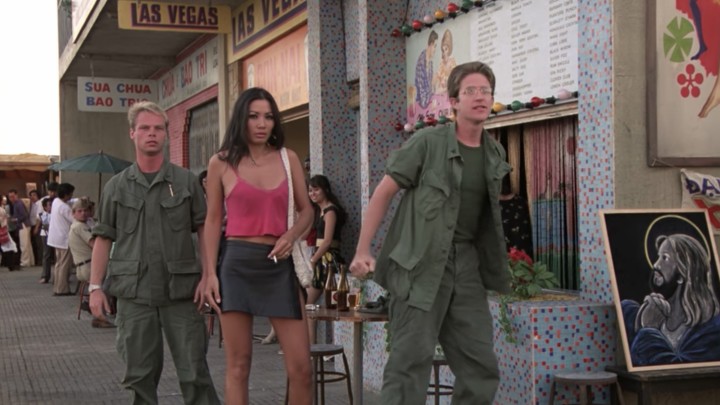 Then, the themes darken one last time for the war sequences. The few marines still standing—including Private Joker—track down the female sniper, who has eliminated a couple members of the squad, and kill her. Now the men are left inside of a dilapidated building, tumbling down bit by bit as the impact of their firearms erupt into conflagrations, and the ruins seem to utterly encompass them in the midst of their shared silence. The sniper’s death is possibly the most powerful scene in the entire film, because the squad had barely gotten to her before she had the chance to kill them first. Eventually, they leave the building and, on the march back to their camp, burst out with the “Mickey Mouse March”; this ends the film on a borderline eerie note, as it juxtaposes their rendition of a nostalgia-inducing song from a children’s program and the squad leaving the demolished battlegrounds behind them with less men than they had arrived with.

Then, finally, the film ends with a final bit of narration from Joker: "My thoughts drift back to erect-nipple wet dreams about Mary Jane Rottencrotch and the great homecoming-fuck fantasy. I am so happy that I am alive in one piece and short. I am in a world of shit, yes, but I am alive, and I am not afraid." 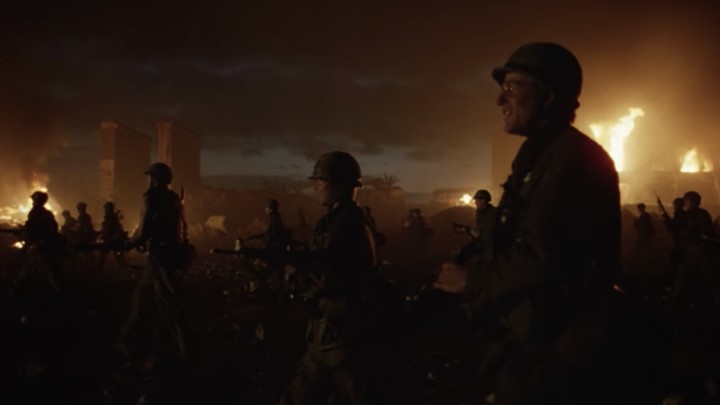 Putting my thoughts & feelings into words.

See all posts by Anna Cheney →