by Benjamin Kibbey 6 months ago in veteran

"The only thin memorial, is in the memory of others." 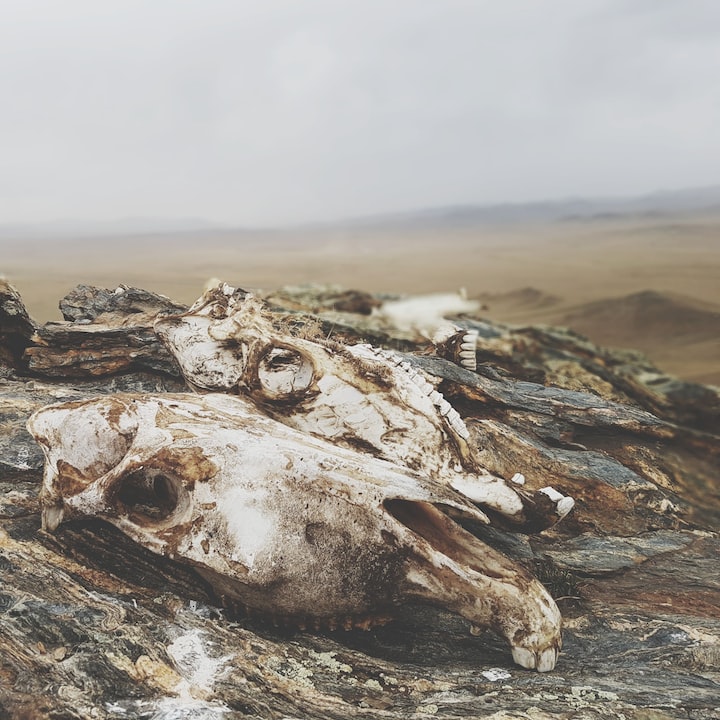 Photo by Anudariya Munkhbayar on Unsplash

I've heard that there are places in the world where death is not so common.

It happens to strangers, sometimes to friends or to loved ones, usually only to the old.

In the wastelands, death is something we breathe. It's everywhere. You don't get away from the smell or even consider it. It's just there.

What stands out is when you can't smell death. And so, I guess, as much as anything, that is what I noticed without noticing. That was the thing that set the hairs on my neck to edge.

There were no corpses, not even bones bleaching, not for a mile or more. There was no death here.

Oh, certainly, there was death in the trees that hung half-withered and scorched. There were signs of it in overgrown fields and in broken down homes. Yet, there was not the death that I had grown so accustomed to – that we all have. There was no stench here.

It was a wasteland, but not a boneyard, not a rotting-corpse yard.

My gut tightened. I was the mouse caught in the open, waiting for the owl to strike. Yet, it must have been at least a mile or more before I knew what so unsettled me.

There had been war here, as everywhere. There must have followed death. Yet here, death seemed to have a stableboy. Someone had been walking behind his grim parade, collecting the droppings.

It was still settling in when I saw the most unsettling sight of all: a graveyard.

Not a boneyard, nor some open pit full of putrid flesh and the moans of the most recent pilgrim. Not the pile of bones nor the sunken earth that marks the few efforts in this fair country to collect up the wages of death.

No, a yard of graves, each with its marker. Each scratched on stone. Each with a name or something like.

On first inspection, I saw several names, but then also those of the anonymous: "A child," "A man," "A woman."

Yet still others that gave identification somewhere between: Here, "A mother;" there, "A son."

There are no graveyards in the wastelands. Not few; not seldom. There are none. We do not memorialize the dead. More often we envy them.

I had to stop.

I had to look, to take in the strange oddity of it. I had to get my bearings.

When you live in the world, you can't remember what it is like to be outside of it. But then something kicks you in the head so hard it makes your eyes see sideways. A moment like that, you sort of step out of yourself, and all the familiar landscapes become an alien world.

It was so strange, so out of place, so… holy.

In the quiet, as my horse shifted uneasy, I heard a scraping sound to my right, back the way I had come but far off the road. Turning my eyes and holding my head still, I could make out the figure of a man bent over a pile of stones near a tree with half of its life still in it.

Here was the carver it seemed, and presumably the grave digger as well.

He looked at me.

I did not move.

He stared for a minute or so, sighed, and bent his eyes back to his work.

He spoke, suddenly and clearly, no hint of whisper or attempt to hide himself from any other who might be near.

"If you want my life, you're welcome to what's left," he said.

I did not answer. I turned toward him, more certain than ever that I was in a trap, but resolved to die as close to my own terms as I could manage.

He kept at his work, etching some new name or title into the stone in his lap.

I do not know how long we stayed that way.

Was this some new game? Was this the trick the man before me played? Did he wait by the road to entrance passers with his collection of dead — to ensnare them, then add them to it? I watched him carefully. He ignored me, with no apparent regard for the living.

"What is your game, old man?" I finally challenged.

He scraped a bit more before pausing. He examined the stone in front of him, and smiled the mad grin I had seen on so many twisted torturers as they watched the thread of life spun out of a fresh victim.

His eyes came to mine, but the smile fell as his face rose.

"I have no game," he shook his head tiredly. "I have only this," and he gestured around his field of graves. "Anything else I have ever had is so far gone now I do not remember it, at least not by choice. Everything is death now, but if I must have death, I can at least have it in peace."

"Now," he continued, standing and stretching and letting his stone slide to the ground. "If you wish to take my life, you can have it. It's laziness or habit alone that keep me holding to it as much as I do."

He stared me down. I sneered.

"Old man, I do not want your life. I barely want my own. I am happy to leave you to your habit of living" – I gestured to the field – "and strange brand of laziness."

Here I saw the first pleasant smile I had seen in – too long to remember what the last one looked like. He even chuckled.

I shook my head. "Nor do I care. If you are waiting to spring your trap, spring it old man, and let us get on with the fighting."

He shook his head, and sadness returned in full force to the set of his face and slump of his frame. He almost whispered.

There was quiet, and I began to back away with an eye toward the road.

"It's an assumption really. She was down to bones when I found her, picked mostly clean. But this one" – and he pointed to another grave – "was near, one hand still clinging to what was left of her."

"Now sure, could have been she was an older sister or just some woman the child had been traveling with or even enslaved by…" he trailed off and bowed his head. "But I think, sometimes, it's better to just assume."

"Like this one," his head shot up and his eyes took on a distant light. "Samuel. He looked like a Samuel – that's my name too, so I should know, I think, what a Samuel looks like. He was the first person I buried, you know. Old Samuel. Sure, I'd disposed of my share of bodies, as anyone has, but I'd never buried a person before him."

He looked to me, as if expecting some question or response. I had none to offer.

I had never buried a person. There's not much use in looking at the dead as people; there's rarely much good in looking that way at the living. That kind of thinking distracts, and it's a good way to make yourself into just another body to be disposed of.

Samuel hummed something, then broke into a few brief words, muttered as much as sung. He looked up at me with the beginnings of tears: a strange thing for the living to waste on the dead.

"There was a song I remember from when I was young, and never understood, back before I was nothing, back when all of us were something more than just moving bodies waiting to be dead bodies. It was haunting and beautiful, but it didn't mean that much in that world. It went something like, 'Who will bury me, when we all must die alone? Who will hold a thought, a reflection of himself? If I die this day, the passing does not matter. The only thin memorial, is in the memory of others.'"

I suppose an old man burying bodies and pretending they are people is not much crazier than all the rest in the world. My only wonder was that he had managed to stay unkilled so long himself.

His tears were starting to run now, and he snuffed back as he looked up at me.

I let him calm down a little, and looked around, wondering how many times this man had bargained with the empty void we all scream into, how many times he had buried some stand-in for his own desire to mean something.

"You'll never make it matter," I finally replied. "They're just bodies. Nothing more."

"This is Samuel, and she was a mother who once was all comfort to this child. And there is Janus, and Isabel. That one, she was dying when she came here, and I nursed her to health, for a while. Her name was Deborah."

"And no, you are right, in part. Their bodies are only bodies, but I remember them, even if it's only a piece of who they were. And even in peaceful times, a piece is the most any of us ever knows of any other, so how is the size of that piece so much to matter over?"

The quiet overtook us again for a time. Neither of us spoke, and the world around grew louder, until my horse's breath was thunder in my ears.

"And who will bury you?" I finally asked, a patronizing touch of pity in my glare. "Who will carry a piece of you when you are just bones?"

He did not hesitate.

"I suppose you, a bit, until someone makes meat of you. But it does not matter, because at least until these stones have worn away, some small piece of each of these is remembered. It's not much, but it's more than there was."

See all posts by Benjamin Kibbey →