What Bearing Does A Cocktail Crisis Have On Our Health?

by Dr Joel Yong 7 months ago in alcohol

Or why too much Demon Drink isn't that great for us in the long term. 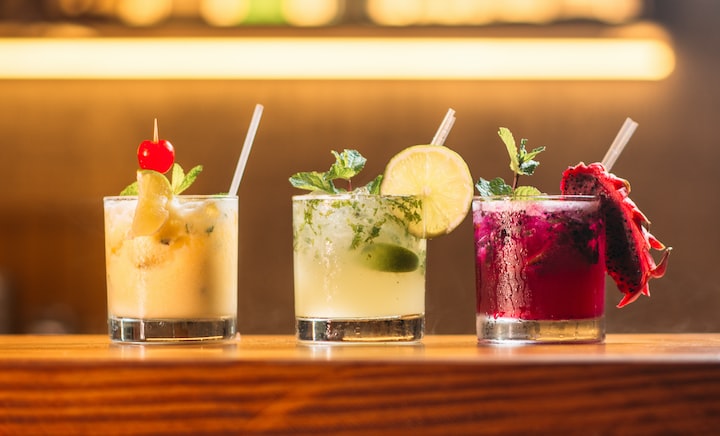 Photo by Kobby Mendez on Unsplash

We love to unwind on weekends with a nice cocktail at a bar somewhere.

I'm an alcohol lightweight with an easy tendency to develop Asian flush, hence my go-to cocktail is a "weak" aperol spritz. To be honest, I'm more interested in getting a nice Instagram shot than what is actually inside the drink.

Of course, though, there are many other factors that can influence how much alcohol we do actually consume. Work stress, for instance. The stress of dealing with this COVID-19 pandemic, for instance. Having peers who drink heavily and frequently can also influence us to drink more than we ought to.

Drinking isn't exactly the main problem - it's what happens as the alcohol gets metabolised by the liver prior to excretion.

The biochemistry of alcohol metabolism

The cells in our liver take 2 steps to metabolise ethanol (alcohol) into acetate (vinegar).

Both these reactions are oxidation reactions, where electrons are removed from the ethanol (Step 1) and acetaldehyde (Step 2). These electrons are transferred to nicotinamide adenine dinucleotide (NAD+), which then reduces NAD+ down to its reduced state of NADH.

Unfortunately, the rate of Step 2 activity tends to be slower than the rate of Step 1, hence when one drinks alcohol in excessive amounts, their faces tend to go red, they get nauseous, and they get dizzy. Those are symptoms of acetaldehyde toxicity right there. Therefore, Asian flush is also a symptom of excess acetaldehyde in the blood.

Why do we call it Asian flush though? This article mentions that:

Due to genomic differences, 80 per cent of Asians have an overactive alcohol dehydrogenase. Hence, they break down alcohol into acetaldehyde very quickly – even up to 100 times quicker. Since alcohol is broken down faster, this is why you might experience little to no alcohol “buzz”.

On the other hand, most Asians have an inactive variant of the second before-mentioned liver enzyme ALDH2. This means that the by-product acetaldehyde takes a much longer to clear from their blood.

What happens when we have too much acetaldehyde in the blood?

Of course, as acetaldehyde is a reactive aldehyde and contains those reactive carbonyl groups…

These reactive carbonyl groups can react with other biomolecules in our body, such as proteins (Is All That RAGE About AGEs Justified?). They can also react with cellular DNA to force mutations and potentially cause cancer (On The Concept of Genetics, And What It Entails In Our Lives.)

It is important to note that we don't get cancer from one night of binge drinking. We are at higher risks of developing it, however, if the drinking was sustained chronically over a long period of time.

This is essentially why alcoholics are at greater risk of developing liver cancer.

Their liver has to metabolise all the alcohol that they are consuming. If they drink themselves drunk on a regular basis, there will be constant periods of time when their blood acetaldehyde levels are higher than normal, which then has a higher propensity to cause greater amounts of damage to their liver cells. As more damage is sustained to the liver, the probability of developing liver cancer/health complications would then be much greater, no?

One has a good defensive mechanism against all that acetaldehyde.

Our liver cells contain the antioxidant glutathione (GSH), which can also be used for acetaldehyde neutralisation. So yes, we do have a defensive scheme against acetaldehyde toxicity, and that comes in the form of glutathione, which is regulated by the nrf2 pathway (The Curious Case Of The NRF2 Pathway In The Body).

And as I did mention in The Curious Case Of The NRF2 Pathway In The Body,

The nrf2 pathway therefore regulates the cell’s internal production of GSH antioxidants. GSH is able to neutralise the pro-oxidants that are formed from aerobic respiration, disease or exposure to toxins, and in doing so, can aid in delaying the onset of oxidative stress in the body — provided that the rate of GSH production is sufficient to counter the rate of pro-oxidant formation.

Two molecules of GSH can accept electrons and be oxidised into a single molecule of oxidised glutathione (which we term as GSSG). GSSG can be reduced back into GSH within the cell via the activity of the glutathione reductase (GR) enzyme. Hence, these 2 molecules of GSH can be constantly cycled back and forth between their reduced GSH and their oxidised GSSG states, and deal with the transfer of hundreds of electrons.

Therefore, the production of GSH internally trumps the consumption of Vitamin C.

The problem is that we don't just get bombarded by aldehydes from drinking.

We get tons of that from the overconsumption of refined carbohydrate products, too (The Problem With Excess Sugar Consumption In Our Lives).

In What Happens To The Food That We Eat, And How That Affects Our Health., I also do examine the effects of consuming polycyclic aromatic hydrocarbons (PAHs) from charred meats or smoked foods:

The simplest PAH in existence is benzopyrene, which on its own is not really a problem. Unfortunately, the liver's enzymes will biochemically process benzopyrene into a highly reactive epoxide, which then allows it to do its damage by reacting with cellular DNA and forcing mutations that can ultimately result in the development of cancer, which is more likely to happen if there was insufficient glutathione to neutralise the epoxides before they reacted with cell DNA.

Again, of course, we're looking at the prowess of one's defensive mechanisms.

That's why not all smokers will get lung cancer, and neither will all alcoholics get liver cancer.

The risks for them are higher, but if their defensive mechanisms have enough juice in them to neutralise the initial stages of the problem... It would be more difficult for them to get it. Everyone is born with cells that utilise the nrf2 pathway to produce glutathione. But the rate of GSH production will vary from person to person. If the baseline rates were able to neutralise the threats, then the threats wouldn't be much of a threat at all.

However, as GSH is a key player in regulating Vitamin C regeneration (and therefore a major player in one's immune health), then it would be easy to correlate a weaker immunity with lower GSH levels.

It all has to do with the defensive mechanism that our body has.

At the end of the day, though, the million dollar question would still be:

Is it possible to support the health of our defensive mechanisms and be earning an income from it?

I do examine that in this ebook - Can We Improve Our Health And Our Wealth In Tandem, or really, is taking care of our health profitable? I blend aspects of the profitable wellness sector (to look at enhancing our physical health) together with aspects of the sharing economy (to look at enhancing our financial health) that is popular for creating a sideline income/side hustle that people are looking out for these days.

Do feel free to have a look at it to see how I'm doing it myself!

Joel Yong, PhD, is a biochemical engineer/scientist, an educator and a writer. He has authored 1 ebook (which is available on Amazon.com in Kindle format) and co-authored 6 journal articles in internationally peer-reviewed scientific journals. His main focus is on finding out the fundamentals of biochemical mechanisms in the body that the doctors don’t educate the lay people about, and will then proceed to deconstruct them for your understanding — as an educator should. Do visit his website here to connect.