by SKYLERIZED 8 days ago in wine

What would a couple of scientists do for the advancement of the wine industry? 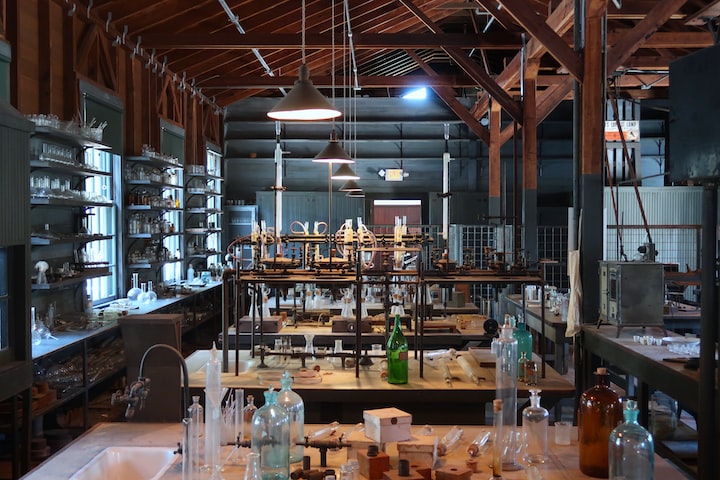 Photo by Sieuwert Otterloo on Unsplash

Lin laughed. “Hand me those two beakers over there, please. If you want to earn your doctorate, you’re going to have to first complete this formula for our first date,” the doctor said. “Take that ethanol and water.”

The two chemists whisked around the spacious New Sweden University laboratory in Wilmington, Delaware. It rivaled the super lab in the aforementioned show about a chemist-turned-meth manufacturer. Jillian gained positive control of the substances.

Dr. Lin then turned water into wine. He added acids, sugars, volatile flavor and aroma compounds, pigment compounds and tannins to the machine.

“And you’ve never tried this before?” Jillian said, an incredulous look spreading across her face.

Will the thing work?

Dr. Lin’s confidence shined through in this moment. Jillian stepped back and watched the ingredients pass through the machine. The liquids and other agents funneled through a system of tubes. All of it was like a beautiful storm producing chemical rain that would make Bacchus blush. Then, after about five minutes, the mixture finally emulsified into a single product. Dr. Lin placed a wine glass below the spout, which issued the deep red liquid.

“One for you,” he said. The doctor then placed a glass under the spout for himself.

“Now mine,” he said. Jillian looked on with a bit of trepidation. She clutched the stem of the glass as she watched the doctor, certain about his mad design, lifting up his glass for a toast.

Here for the outcome (and income, of course)

“To a totally revolutionary way of making some exquisite vino.”

Jillian reluctantly clinked glasses with the doctor. She looked at him and then saw a strange twinge in his face, and then a wry smile.

How does it taste?

They swirled, sniffed, and sipped the beverage. They couldn’t have smiled more broadly if they’d both been lifted off the ground to soar amongst the clouds.

“I was prepared to make a frowny face, if that is the technical term,” Jillian said.

Dr. Lin just looked at her. “I would imagine so.”

“How did you know it was going to work?” Jillian asked.

“I tested it first by myself, so I wouldn’t ruin this day. I figured I’d make this something positive to remember. The notes aren’t quite perfect, but it’s like Heisenberg’s blue stuff from the show, it’s about 99.1% pure.”

A concern about patents

“You’ve got to patent this. The whole process has to be patented along with this contraption.”

“That’s in the works. This could be a billion-dollar idea. And I’ll let you have a percentage of the profits for keeping quiet until all the ink is dry.”

She made a mental note to keep her lips sealed.

“Okay, then,” Dr. Lin continued. We can build up an entire corporation based on this machine, and certify a patent for the application of the formula.”

“I am definitely impressed. I think we can form quite the business, science, and romantic team. If we can sell this, we may just have enough time and money to see through the business and love. I see us both solidifying our bond, and making an opportunity to continue this momentum.”

Dr. Lin grabbed Jillian by the waist and kissed her mouth. “I know what can make this happen. Once we secure everything, you’ll be able to deliver your doctoral dissertation on the method of what you just saw. Would you like another glass?”

He fixed them both more glasses of wine. “I was saying you can come aboard and definitely team with me as a chief scientific officer (CSO). Salut!”