by Alan Russell 11 months ago in wine

This was one of those experiences that came to me late in life. It was the confluence of that long wait, associated experiences, and memories that made one moment in a hotel bar in Ross On Wye all the more poignant.

All I wanted to drink with my prawn and lobster cocktail was something other than beer or lager. Both of which, whose volume, would have set the bladder alarm for some ungodly hour of darkness later that night. Nor did I want a soft drink that would have been cloyingly sweet. I wasn’t driving anywhere so I could have a glass of wine.

Behind the bar was a poster for ‘Pinot Grigio.’

‘A glass of Pinot Grigio please,’ I asked the barman when he served me.

Once I was back at the table I gently swirled the wine around the glass as my Grandfather, who was a sommelier, had taught me and held it up to the light. ‘Look at the legs,’ he would tell me. The legs being the chimera of wine left behind the swirl that slip down the side of the glass. The longer their journey takes the better the wine. My humble glass of wine definitely had ‘legs.’

Then the first sip and savor of the chilled liquid. It struck cold in my mouth but soon warmed and released its flavors. There was fruit both sweet and citrusly acidic followed by a mild spice; pepper perhaps? None of the flavors exploded. They were more of a sensation. Then the swallow. On the way down there was a slipstream of soft visceral warmth.

The Memories of a Brother

Whenever we had a meal out with my late brother, Brian, he would assume the self-appointed role of the chooser of the wine. No one disputed his position and eventually, it became a part of the family ritual.

Everyone around the table would order their food and Brian would ask if we wanted red or white wine. There would be the usual discussions. ‘I am having red meat so I guess I should have red wine.’ ‘I am having fish… should have white really.’ And true to form aiming for the middle ground Mum would suggest a Rose wine.

None of this really bothered me at these meals as I was invariably the designated driver for my parents and my wife so the rule was, I have car keys so no alcohol.

While the discussions around wine color continued, Brian would get hold of a wine list. He would go through it with the studied seriousness of a gambler going through a race card looking for a winner. The waiter would return to take the drinks order.

‘Have you got any Pinot Grigio?’ Brian would ask.

Of course, Pinot Grigio was on the list. Brian! You went straight to the white wine section skipping past the reds and not even turning the pages to the champagne section.

‘We do sir, Italian only and I would recommend it,’ the waiter would answer.

‘I think we’ll have the Pinot Grigio if everyone is happy with that,' in a way that put the rest of the family into a corner from which there was no escape. Nobody minded. It was accepted as part of the family lunch ritual.

‘Could we have two bottles to start with, please? They will be chilled, won’t they?’ Brian would ask the waiter.

The waiter would return, and the ritual would continue. He would hand the bottle to Brian in a cotton serviette. Beads of condensation ran down the neck and shoulder to this white collar of formality. Brian would nod his approval and the waiter would open the bottle. The waiter would give Brian a small taster. He would swirl it around the glass and look for those all-important ‘legs.’ He would take a sip and probably experience the same combination of flavors I had waited so long for. Then the swallow followed by a very extended dramatic pause. With an intimacy born of a shared ritual, Brian would nod his approval. The wine would be served and lunch would begin.

The History of Pinot Grigio

Pinot Grigio is made from the pinot gris strain of grapes which have a blue grey skin, hence the word ‘gris,’ which is French for grey. These were originally grown in the Burgundy region of France. In the 1300s, the strain migrated to Switzerland where it became a firm favourite of the regional Emperor on its way to Italy but that journey was delayed. The last few hundred miles of migration from Switzerland to northeastern Italy took another 600 years only becoming established in the early 19th century in the Lombardy, Veneta, Friuli and Alta Adige regions as a relative newcomer to Italy’s viticulture.

Pinot Grigio has now become a truly globalized wine. It is not only exported around the world from Italy but is produced in countries with established and burgeoning domestic wine industries. A veritable United Nations of countries such as America, China, Russia, Hungary, Australia, and New Zealand produce their own Pinot Grigios fully able to compete with the more traditionally based output from Italy. 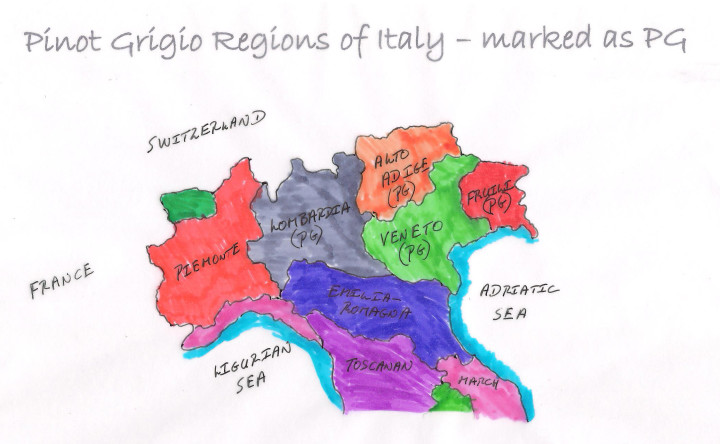