by Calie Judy Brooks 14 days ago in literature

The Tale of a Drunk Writer 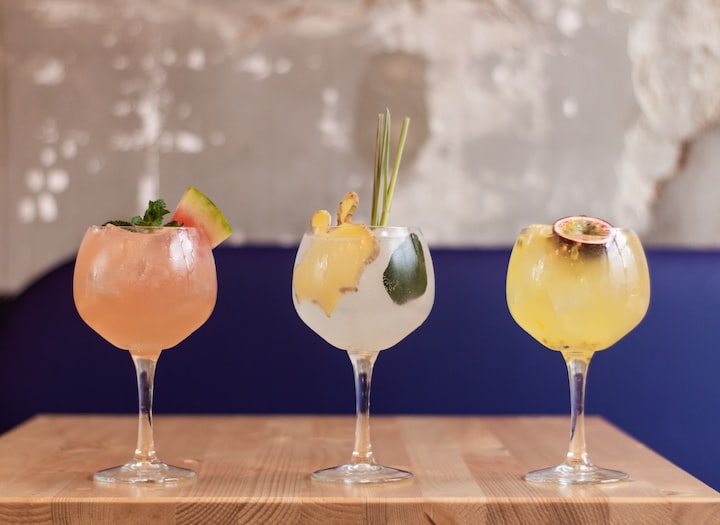 The other day, I was drunk for the first time in my life. While I was still under the influence of alcohol, I had the idea to write about the effect it gave me. I added some information afterward. All the things I wrote after I sobered up are written in a different font so you wouldn’t mix up the two. I left some mistakes I made as they are to leave a more natural effect to the fact I was drunk. Now, that’s how the text started.

I forgot what I wanted to write here...

I can still write kind of straight.

Though, my mind is spinning.

I don't know if the alcohol is wearing off or getting worse...

30 minutes diseppeared from my knowledge of time.

I feel like my mind is drifting. On waves that doesn't exist. My mind, does my mind exist?

I want to sleep.

Of everything I could do while drunk, writing is the thing I do.

Being drunk breaks our mental barriers.

Does that mean I have a mental barrier to write and I would write every time I'm drunk?

I would write every time (all the time) if I didn't have mental barriers?

I again forgot what I wanted to say.

Should I drink a little more to keep this feeling?

I feel like I shouldn't, but I really want to.

That's what I wanted to say.

My skin is sensitive now for some reason.

I almost forgot where I put my cell.

But now... but now... I have difficulty to concentrate on one task.

Should I go sleep?

Hopefully, I have an auto correct or else my words wouldn't make any sense either.

I want to eat.

Why does it taste so good, it's normal food...

Why do I write of all things?

I could have done anything.

I wonder if when I'll be undrunk I'll change some of my words.

What I'm sure is that I'll publish this somewhere.

I was about to say where would be the places I could publish it. But then I realized it wouldn't make any sense.

I don't drink alcohol, but I don't drink water too. (I meant it in the way ‘I stopped drinking alcohol a while ago, I drank water for a while, but now I stopped that too because I want to keep the feeling’ all while thinking I needed to stay a little drunk to have a drunk text interesting enough.)

I don't want to be undrunk before I finish writing a complete text of my drunkness.

Why do I feel like drunkness is some kind of monster?

I wanted to taste a little more.

I shouldn't feel sad though, there is other food.

I might think it's a masterpiece right about now, but I think it will seem trash when I get sober. (I was referring to the text I was writing.)

Sober!!! That's the word for undrunk.

I need to go pee again.

No, I think it's the fourth.

It took me so long to write 'fourth'.

Phones are so bothersome.

I want to pee, but I need to write.

I put it the same place as before.

My underwear doesn't seem to fit me. (I don’t know what came into my mind at that moment.)

They doesn't need to know that. (I could have simply erased those two last sentences, but I wanted the text to stay true to itself.)

Why is all the food left unopened?

Am I acting or am I truthful to my drunkness right now?

Did I wrote enough words? (I did, but I had no way to know… I almost counted them at that moment.)

To see how I think while my mind is... drifting?

I'm looking some kid show and I find it hilarious!

Concentration, it doesn't exist... in me.

Why am I so tactile?

Why is it so fun?

Did I write enough words?

Why did I wrote words?

What if I wrote things only from autocorrect?

I don't know what you think you can be used for a while back and forth between the two weeks ago by the way to get a chance of getting a new computer daily basis of the word out to the savage planet.

Well, I almost made a video.

Why am I still drunk?

It's been... more than one hour that I didn't drink food, oups, I meant alcohol.

An extremely small vodka orange juice and a few sip of absynth diluted in water and a sip of two other things and half a beer. (Yep, that's all I needed to get drunk…)

But it was more than two year, nop, two days, NO! One hour ago.

Maybe my drunkness mixed up with my sleepiness...

Oh, well at least it's not me.

Drunk is over, sleepiness took over.

I'll go see one episode of a TV show before going to bed.

If I don't fall asleep before that.

Phone!!! The phone is ringing.

Wrong! Sister took it and gave it to mother.

Food doesn't seem to want me.

I almost sat on my father. (I didn’t see that he was there… he probably didn’t even notice.)

Mother took my place in the bathroom.

Lights off, lights on.

Itchy… (I don’t remember what and why it was itchy…)

Lights on, lights off.

Or was it the opposite?

Why are you on my way light thingy?

Close the door change my clothes.

No pants, no sweatshirt.

No take away your watch.

It's definitely sleepiness not drunkness anymore.

See you later phone, if not tomorrow.

I still have a little alcohol in me.

How many percent, my phone?

As I already started it, it's half an episode before sleeping.

I once tried to do as much front flip as I could on the trampoline, I wonder what it would feel with alcohol in my body...

I won't try, it's too cold outside and the trampoline is probably down by now.

Sleep, sleep. Oh, right! I forgot to turn my alarms off.

Off it is now.

Off they are now.

Now off to sleep.

Close the lights and hide under the warmth of the blankets.

Two hours after I stopped drinking.

What if someone never stops to be drunk. (I meant after they stopped drinking.)

It's not the time for that. Close the lights!

Done. Now under the blankets and close your cell.

I said close it!

There are nerves in my foot glitching.

Doesn't matter, close the cell and go to sleep.

I finally did and now I'm not drunk nor tired anymore.

I know the feelings now. Well, some of it at least.

I'm still not sure if I was overreacting or if I am really like that when I drink too much alcohol.

I know my... dizziness of drunkenness could have been pushed a little further, I still had some boundaries.

I still wonder what would happen if I crossed the line of my boundaries. I might test it out later in life.

Losing control is somewhat of an interesting feeling, but I wouldn't want to go there too often.

It made me feel good, but I'm sure that past a certain limit, I would feel bad, if not at that precise moment, the next day.

I know I didn't exceed my limits as I'm not feeling any signs of a hangover.

I had a good night of sleep and even dreamt something I liked.

I was laughing a lot yesterday. Everything seemed so funny.

I'm always true to myself, it's probably why I don't feel bad doing all those seemingly ridicul things.

So, the effects I discovered of the alcohol on me, is that my senses get distorted, my head spins a little, I think everything is funny, I want to eat everything I can and I am more tactile than usual. That's about all I can say. It felt a bit like the effect of sleepiness.

As for the constant need to pee, it's more about the amount of fluids I drank and the dehydrating aspects of alcohol than anything else.

That's all for the information gathering I did of being drunk.

I probably missed some points, but I won't pursue this experience until a very later date.

I can tell now why I always prevent myself from drinking too much alcohol.

I knew my limits and that I was weak to its effect. I still know them, but I might want to exceed them a little from time to time.

I remember I once felt yesterday as if my heart was burning. Just like if there was some burning fluid running through my veins.

Did I make a fool out of myself? Maybe, but I don't feel bad about it. It was an interesting experience that I might want to reiterate one day.

I had fun and others did too. It loosened some of my stiffness and made me glimpse at some things I had never thought before. A world of possibilities in sobriety.

I somewhat want to be more productive now, for some odd reason.

As if some of the restrictions I had put on myself in the past prevented me from doing my very best. Those restrictions fell yesterday and I didn't put them back on today.

I'm not sure if it will stay that way or not. Maybe tomorrow, I’ll be back to my normal self.

After all, everything comes back to its original movements and shape when the force applied to them disappears. Though, its shape could have been bent and it could stay deformed because of that said force. My mind bending in this shape doesn't seem too bad. But I won't apply too much force on it or it could break. And when something breaks, it's hard to break it in a 'good' way. Usure and time are one of the only things that can change something's shape without breaking it. But, it can still be used in a bad way that may end up breaking it anyway. We need to put time and effort in order to shape our mind in a way we like.

Who knew that being drunk could become a life lesson if we took a little time to analyze the situation?

I need to make something clear. I do not condone the usage of alcohol to shape your personality in a ‘better’ way. Drink alcohol with caution and, as much as possible, try to stay within the limitations of your constitution and your body. Being drunk can be an enlightening experience, but it could as easily become a dreadful one. Also, a life experience loses its value if done too often. If you want to live a pleasing experience, try to stay with trustworthy people and friends in a reliable environment. I was surrounded by my family in a safe place throughout this event. I am positive that I wouldn’t have had the same experience if I had been alone or in an unsafe environment. On this note, stay safe and live your life to its fullest without too much excess.