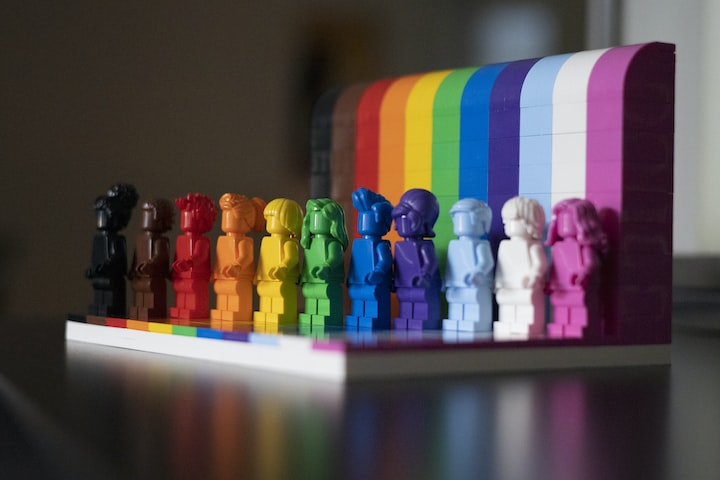 Photo by James A. Molnar on Unsplash

Every year on June 1st I get a handful of messages wishing me a Happy Pride Month. I usually respond with the generic, "thanks, you too!" because to be honest, I don't have the energy for more.

My gender is like the ocean, it has the capacity for so much

I've been aware of my gender identity and sexual orientation for longer than I've had the terms to explain it. I fell in love for the first time with another female when I was four years old, and I wanted to be born a boy when I was five. I came out publicly as bisexual at 15, and then as a lesbian a month later. Tried to go on a date with a boy, then kissed my female best friend, and then two months later got into my first real same-sex relationship. As toxic as it was, it felt way more right to be with a girl, then that one super awkward date with a boy.

Like I told my dad when he doubted my orientation, I want to feel right inside, not wrong.

My "coming out" peak was running Pride events, starting an 2SLGBTQ+ non-profit group (YR Rainbow Umbrella) in my hometown, and participating in Pride Marches. I held and attended workshops, open mics, and panels related to support services and schools. Oh, and a Hons. BA in Sexuality Studies at the same time because, why not?

It was a LOT of fun.

Getting dressed in the morning was, and still often is, a challenge.

But after all the fun and community during my adolescences and early 20s, I moved to the Arctic and honestly... didn't miss any of that. I felt like I almost grew out of it. Pride Month was just another month, and I in a way... moved on with my life. I still identified in the same way, I just felt like I didn't need to scream it at the top of my lungs anymore.

Then I met my wife. On Instagram. Who was in Mexico, while I was in the Arctic. Crazy, I know. We dated for three years, and this past January we finally got married. Gay goals, I know. (You can read a little bit about that here.)

But like I said, the older I got, the more adulty I got, and I felt that I was okay just stepping back from all the stages and parades, and just being me.

June represents Pride Month for many reasons, primarily for the Stonewall Riots on June 28th 1969. Riots that lasted 6 days then, but ring decades later. We wouldn't have the freedoms we have today without the courageous activism of LGBTQ+ People of Colour, and the continuous battles of the community. Trans POC led and continue to lead the way.

So why do I stand back from celebrating June as Pride Month?

The first, is commercialism. Pride month has turned into a great capitalistic gain in North America. Companies paint themselves rainbow and scream equality, while they donate hundreds of thousands to organizations that are oppressive, racist, and colonial (if not also homophobic 11 out of 12 months of the year).

I am so sick and tired of this capitalistic bandwagon when June comes around.

Not only that, but funds allocated for specific marginalized groups during Pride, often go into the pockets of Pride organizers instead or are horribly misused and managed. Shameful.

And, it is all too common for police to go into parks and downtown areas and clear out encampments of homeless people to make room for a parade that litters the entire area. This is known as "beautifying downtown Toronto for Pride". And then there's tens of police units blaring sirens and screaming pride at the parades. Talk about triggering.

The second reason is more of a personal reason. I don't feel that I need to celebrate who I am just one month of the year. Or that certain rights and freedoms should be visible just in June.

I exist all year-round.

Pride events can be fun, especially for youth, and those who want to party and celebrate. But I don't feel it's fair that I have to feel like only in June can I come out from the shadows. And that's me speaking as a white settler, I can't imagine what its even like for POC.

You have a right to exist and BE PROUD every day of the year. Don't let anyone tell you otherwise. Ever.

Oneg In The Arctic

Stories from the TRUE NORTH with a side of humour, adventure, good food, and snowy poetic dreams

More stories from Oneg In The Arctic and writers in Pride and other communities.