by Ashley Gomez about a year ago in Relationships
Report Story

A little tale about loss and love 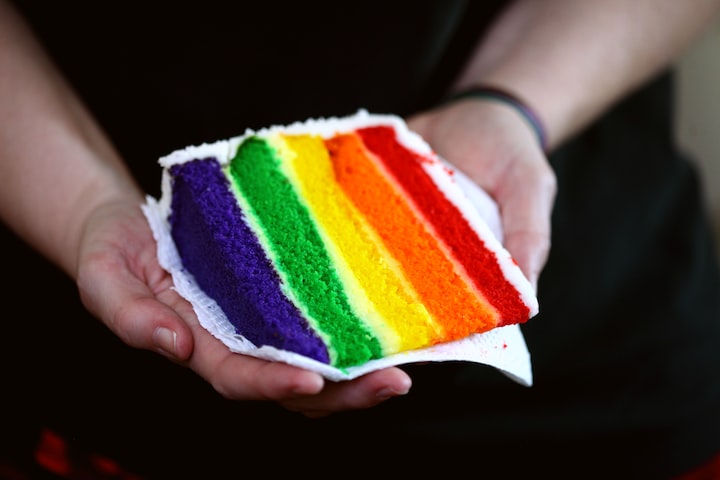 Happiness is cake. Or so it is for one Millie Gonzales. Cake and her late abuelita, to be specific.

She was blessed with her grandmother’s sweet tooth. They would spend countless blissful hours tinkering with recipes, licking batter off of spoons, and enjoying in the fruits (well, cakes) of their labor. Their shared passion for baking inspired Millie to want to share her happiness with others. She’ll never forget the tearful look her sweet abuelita gave her before pulling her into a fierce hug when she revealed the name of her shop: Rosa’s Bakery. It seemed only natural to name it after the woman who had supported her every step of the way. It was an exciting year watching her business gain traction and quickly become a local favorite. However, things took a turn when Rosa’s health started to rapidly decline last month.

Millie decided to take some time off, temporarily closing up shop to care for her. Of course, it was tough losing out on revenue during that time, but she wouldn’t trade those last two weeks with her grandmother for anything. The last cake they shared together was the first Rosa taught her to make all those years ago: A decadent chocolate cake. The sweet old woman’s eyes danced with her first bite. Eventually, walking became difficult for Rosa, but nevertheless, they carried on like always – sharing stories, jokes, gossip, and cake.

Millie contemplated spending another week away from the shop to mourn after her abuelita’s funeral, but ultimately decided it’d be best to get back into the swing of things sooner rather than later. So, here she is, flipping her sign around to “open” with a heavy sigh. On display in her shop’s front window is a slice of chocolate cake (sentimentality having gotten the best of her) alongside a fake glass of milk. She’s afraid the prop cheapens the display, but remembers learning the hard way that real milk stinks the place up by noon.

Turning on the balls of her feet, she gives her cheeks a little slap to refocus herself.

“Abuelita, I hope you’re watching closely. I’m going to bring smiles to all my customers with the skills you taught me,” she playfully declares.

After announcing her reopening on all her social media, people started to steadily trickle in. Even some new faces appear in her doorway, interest peaked by all the activity. Soon, she is happily buzzing around, accepting custom orders, restocking her case with freshly baked goodies, and interacting with customers. She adores what she does and can’t think of a better way to celebrate her abuelita’s life than to continue making people happy like this.

Wait. Something stops her mid-sentence with a customer. There's a young woman outside her storefront window wearing the smallest of frowns while gazing at her chocolate cake display. It appears that she, too, was stopped in her tracks by what she saw – Her body still facing forward, but her head turned towards the window as if something obscene lay there on the plate instead of Millie’s delicious cake.

The moment quickly passes when the woman continues on her way, but it nevertheless leaves a bad taste in Millie’s mouth. Who the heck dislikes chocolate cake so much as to scowl at it?

Millie flips her sign to “closed” at 5:00 pm and readies herself to go home. It was an eventful, day but as she pulls into her driveway, the weight of her loss settles back onto her shoulders. Pouring herself a glass of Moscato, she lets the sadness wash over her for a bit. She reminds herself, though, that it won’t always be this hard and she can surely drink to that.

The week proceeds with one busy day after another. By the time Saturday afternoon rolls around, Millie feels like an old sack of flour tossed against the wall. Eager to have a couple days off, she wonders how she will spend them. A sudden lull in customer activity gives her the chance to tidy up and check her email and social media. She smiles at one of her customer’s posts: “Had a lovely day today! Enjoyed this savory croque monsieur sandwich at C'est la Vie, but the cherry on top was at Rosa’s Café. No really! The cherry tart in her window beckoned me and I couldn’t resist!” She swiped through the photos and chuckled at the girl posing with the freshly sliced cherry tart that she remembers selling to her just an hour ago. She likes and comments and then visits the other business’ page out of curiosity. It’s a French café not too far from her shop. It takes only a moment of scrolling before she decides to pay them a visit after work to kick off her weekend.

At 5:26 pm, she arrives at C’est la Vie. The shop is cuter in person; the brightly painted red exterior reminds her of Moulin Rouge. She sits at a small table off to the side and reviews the menu. After ordering, she takes more time to take the place in. The owner must have a green thumb because there is a variety of potted plants near the windows and cut flowers on all the table tops. She admires the fluffy red carnation atop hers. She’s not sure what catches her attention, but she looks over to another woman eating alone at a corner table. Strangely enough, she recognizes that neat little frown.

It’s the very same woman who frowned at her chocolate cake earlier this week! The woman pokes at what appears to be a salad while silently chastising it with her eyes for reasons unknown. Millie observes her a little longer. Her curly hair is dyed blonde, but tastefully so, and sits at her shoulders. The light weight navy cardigan she’s wearing pairs nicely with the flower print dress under it. From the looks of her perfectly matched purse, this woman invests a lot more thought into her outfits than Millie does. After an adequate amount of time staring to make her feel like a creep, she averts her attention to the carnation again. Good timing, too, because the server brings out her food.

It doesn’t take long for her eyes to wander back to the woman, though. She’s now graduated from poking pieces of spinach and romaine to stabbing. Ah – now she’s eating, but it looks far too mechanic to be enjoyable. Millie stifles a laugh when it dawns on her that the woman is begrudgingly eating that salad. She cheerfully returns to her creamy, lemony pistou linguine. “Maybe I’ll make Tuesday’s special lemon custard,” she thinks to herself.

The woman finishes about the same time as Millie and leaves the café. Perhaps the good food, lovely atmosphere, and sweet wine is getting the better of her, but Millie catches up with the woman to strike up a conversation.

“I’m sorry to bother you, but I just ate at that café too and noticed you had one of their salads. I was considering one, but decided I’d save it for next time. How was it? Which did you order?”

Millie isn’t trying to be condescending at all – she is merely curious about the woman who frowns at cake. Unsurprisingly, the blonde is taken aback by not only the unexpected encounter, but by the question, too.

“Oh! Uh... Yes, I had the Salade Lyonnaise. It was...” she pauses to find the right word, settling for, “good.” Her smile looks a little forced, so Millie looks at her quizzically.

“Is that so? That’s good to hear. I’ll order that, then. It’s the one with dandelion leaves, right?”

“A colleague recommended them to...” she pauses again, but this time looking for a way to backtrack. “They have various health benefits, so I wanted to try.” She crosses an arm in front of her, grabbing hold of her elbow. It’s a subtle move, but not one Millie misses. She used to withdraw into herself like that, too.

Baking has always been as good at filling her heart as it has her clothing. She’s no longer self-conscious of her weight; On the contrary, she wears it proudly as a baker.

“Ahh - I know what you mean. I make cakes for a living, so I’ve tried just about every edible leaf under the sun. My abuelita scolded me about suffering through meals, though. She said food should be enjoyed, not forced,” she smirks at the direct reference of this woman’s experience just moments ago. “My abuelita was a smart cookie, so as long as I’m healthy, I make my cake and eat it too.”

The woman listens intently with what Millie can only describe as admiration. She blushes a bit under her gaze. Now that she’s face-to-face with the woman, she’s noticed a few more things about her. Her figure is fuller, no doubt, but her curves are as pretty as a Bundt cake. The little belt cinching her waist is a very nice touch. And although her make-up is light, it’s perfectly polished. Her eyes are a soft blue grey and lips a faint pink (when did she reapply gloss?). She snaps out of it when the woman speaks again.

“Your grandma seemed like a wonderful woman to have in your life,” she says, this time with a real smile. A beautiful smile that makes Millie want to see her again someday, preferably with one of her cakes in front of her.

“She was,” Millie responds. “Hey, if you’re ever in the area again and enjoying a cheat day, stop by my shop for something sweet. It’s kinda my specialty.” She hands the woman her business card. “My name is Amelia, but I go by Millie.”

The woman takes the card and recognition flashes across her face. “Oh my goodness! This is your shop? I pass by on my way home from work. It’s been very difficult not to come in already, but with this invitation I'm not sure I can refuse anymore,” she giggles, clearly more comfortable with the conversation now.

“Great! I’d love to see you again – ah! At my shop, of course!” Millie blushes again, raising a hand to the back of her head, nervous. She wonders if the woman has picked up on anything yet.

“I look forward to it. My name is Natalie, but you can call me Nat,” she extends her hand. Taking it, Millie’s heart flutters like a school girl’s.

Come Tuesday, Millie whips up a tantalizing lemon custard for her display window. Nat stops by after work and allows herself a bite (before promptly allowing herself two more). Millie learns that Nat is a university professor who teaches English, so the stress of her job often drives her to binge eat. Her doctor scolded her for such behavior, hence her sorry attempt at eating healthy. They brainstorm ways to appease her doctor, but without outlawing sweets.

Their friendship teetered on something more for a while before Millie took the plunge to ask Nat out on a proper date, to which she responded, “where to?” smiling.

Now, Millie’s happiness is cake, her late abuelita, and her cute girlfriend Nat.

More stories from Ashley Gomez and writers in Pride and other communities.