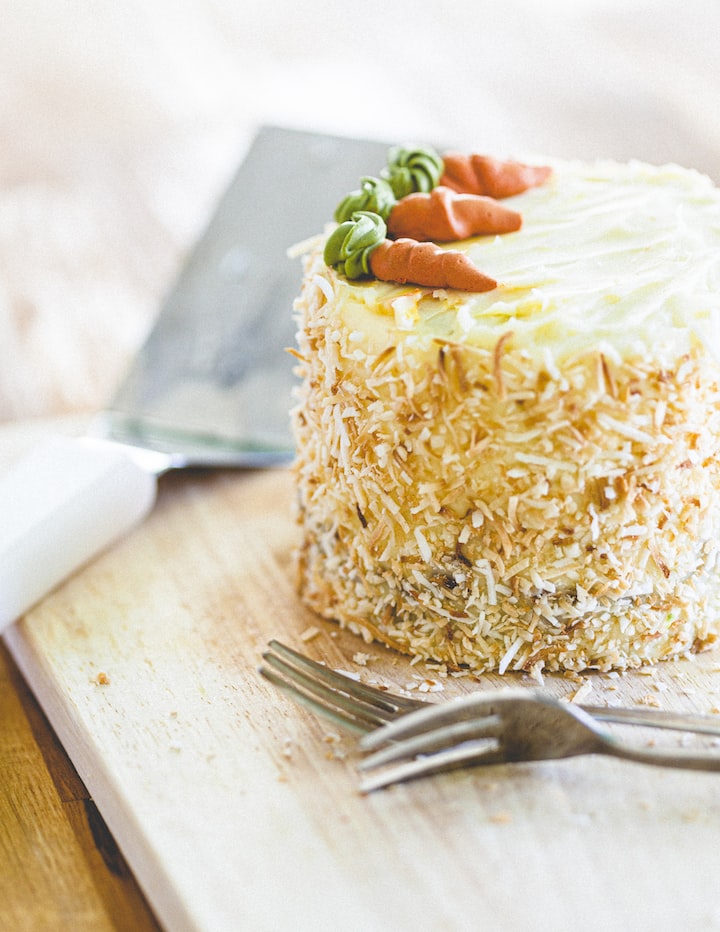 Photo by Cristina Matos-Albers on Unsplash

Meredith always hated birthdays, she just didn't see the point in all the hubbub. She hadn't asked to be born after all and it certainly wasn't an achievement. Yet, here she was standing at the bakery counter picking up a chocolate cake for her own birthday. She didn't even like chocolate all that much but her mother had insisted on a party and had already paid for the cake.

"Is that gonna be all for you, Miss?" The baker asked, snapping Meredith back to reality. "Yes, that'll be all, Thank you." Meredith gathered the cake and headed out of the store. She walked to her car and fumbled with her keys to unlock the door of her blue 2005 Honda CRV. She placed the cake in the passenger seat and left the parking lot.

On the drive, Meredith kept thinking about how her mom doesn't even know her well enough to know her favorite cake isn't chocolate, (it's carrot cake with cream cheese frosting). And about how she doesn't care that Meredith hates parties. "What if I just don't go home?" Meredith thought to herself.

With that thought, Meredith made the decision to not attend her own birthday. Instead of taking the turn back home, Meredith decided to drive straight out of town. She wasn't sure where she was going, only that it wasn't to the party. She looked down at her phone and saw a text that read, "Hurry home, guests will be here soon, love you, mom."

Meredith turned her phone off and kept driving. She headed south away from Kansas City and down toward the scattered small towns looking for an escape from her mothers expectations and the ridiculous party and guests who didn't know her at all. As she drove she looked over at the chocolate cake and was filled with seething anger at its existence.

"I don't even like chocolate cake! It's HER favorite, parties are HER thing. She can't even see me as an entirely separate person with my own likes and dislikes. I hate her and I hate this stupid cake!" With that, Meredith hurled the cake from the car window, where it splattered onto the hood of the car behind her.

The driver turned on sirens and red and blue lights and promptly pulled Meredith over. Meredith cussed, pulled the car to the side of the road, rolled down her window and began sobbing immediately. The officer approached her window and addressed Meredith, "Ma'am, do you know why I pulled you over?"

Meredith tried to fight back the tears that wouldn’t stop and shakily responded in a small voice, "I umm, I assume it has something to do with the cake." "Yes, ma'am, something to do with the cake indeed. What were you thinking throwing a cake at an officer of the law?" "I ummm I didn't realize anyone was behind me, I just, it's my birthday and I'm supposed to be at my party but I hate parties and I hate chocolate cake and my mom made me get one and I just couldn't take it." "How old are you, ma'am?" "I'm 25." "Why does it matter what your mom does then?" "I still live with her and she's very controlling, I just can't get out from under her. So I decided to not go to the party and I threw the cake."

The officer sighed deeply and paused. He looked Meredith over, examining her tear-stained face and carefully considered her circumstances. He knew he couldn't let her off with a warning, throwing cakes on highways in a fit of rage, just wasn't acceptable behavior.

"Well, missy, as much as it pains me, I'm going to have to charge you today." Now it was Meredith's turn to sigh, in resignation. "I understand officer, am I under arrest or will I be receiving a citation?" "You're not under arrest, but you will be receiving a citation. Disorderly conduct, and I could be charging you with more. Get your temper in check, young lady." "Yes, sir."

Meredith patiently waited for the officer to write the citation and contemplated her life up until that point. She'd never been charged with a crime before, so hopefully this wouldn't hurt her career. She had finally landed her first "grown-up" job 6 weeks ago and was in the process of saving to get out from under her mothers thumb.

She didn't expect to still be living at home in her mid-twenties, but after graduation the job market wasn't exactly welcoming. Her mother was sure to let her know that majoring in Art was a mistake. Her job now was as a curator for the Nelson Atkins Museum of Art. She desperately wanted to keep it.

The officer returned to her window and handed her the ticket with a court date. September 23rd, a Thursday and a month from now. She wouldn't hear the end of it from her mother and hated the idea of returning home with her tail between her legs. Meredith pulled away from the side of the road and continued on her journey. She decided to stop at the next gas station to fill her tank and her stomach. Stress always makes her hungry and getting that ticket was definitely stressful.

Meredith walked into the gas station, with mascara running down her cheeks, and headed straight to the restroom. When she walked through the doors she was met by an equally tear-stained face. "Oh! I'm sorry, I didn't mean to interrupt. I'm just trying to get myself cleaned up. I'm not having the best day either." Meredith said to the stranger.

She replied, "You're fine, I don't mind the company, I just lost my ride and I have nowhere to go. It's been a rough day." "Where are you trying to get to?" Meredith asked. "Kansas City, my brother lives there. I'm hitchhiking from Oklahoma. I ran into some trouble with an ex and had to get as far as possible. I'm Misty by the way." "I'm Meredith, nice to meet you Misty."

The wheels in Meredith's head were spinning, what would happen if she picked this hitchhiker up and took her out for her birthday? She was absolutely stunning, with bright blue eyes that sparkled like sapphires and gentle sloping curves. She looked soft and beautiful. Meredith was entranced by her.

Misty had finally stopped crying and Meredith washed her own face in the sink next to her. As Misty turned to leave the restroom, Meredith spoke up, "Hey, if you'd like to hop a ride with me, I'd be happy to take you to Kansas City, I need to head back that way and could use some company."

Misty paused and considered for a moment. Usually it was creepy men offering to take her to the next stop and she'd put herself in a couple dicey situations already. Meredith seemed kind and trustworthy, she wouldn't mind taking a ride with her. Plus she was absolutely gorgeous, with bouncy brown curls and emerald eyes. You could tell she took care of herself.

"You know what, I will ride with you, it's getting late and I doubt I'll get any other offers from gorgeous women." Meredith blushed at Misty's statement, and sputtered out, "I ummm I think you're gorgeous too." "Alright, now that we have that out of the way, let's hit the road!"

Meredith and Misty exited the store together and Meredith filled the tank. Misty slid easily into the passenger seat and Meredith joined her in the front. "So, how does something to eat sound, Misty?" "I'm starving, so that sounds excellent." "I know of a cute little diner nearby we can stop at." Meredith pulled the diner up on her GPS and headed that way with her passenger.

The short trip was quiet, with neither woman sure what to say to the other. All Meredith and Misty knew was there was an unmistakable attraction between the two of them and neither was sure of how to make the first move. Were the comments about each other's appearance platonic or was it genuine flirting?

They arrived at the diner and Misty held the door open for Meredith. They were seated next to the window and carefully went over the menu. Meredith spoke first, "The carrot cake sounds excellent, but I probably ought to eat some real food." "Get the cake! I might have some myself, I know it's weird but carrot is my favorite." "Mine too!", Meredith exclaimed.

"What are you thinking of for the main course?" Misty asked. "A hot beef sandwich sounds good, it's been forever since I've been to this little diner and their hot beef is excellent." Meredith replied. "I think I'll try that as well." "Perfect timing, the waitress is on her way to get our orders."

The waitress approached the table and asked the woman for their orders. Meredith took the lead this time and told the waitress they would both like the hot beef and carrot cake. Misty ever so carefully slid her hand on top of Meredith's and gave it a gentle reassuring squeeze. Meredith didn't move her hand away, instead she laced her fingers with Misty's.

"So, we're about an hour from Kansas City, do you have to get there tonight, or would you be interested in celebrating my birthday with me? I kinda bailed on my party but I think going out with you could turn my day around. You can absolutely say no, I'll still bring you the rest of the way, I just thought it might be nice." Meredith asked.

Misty's lips curled into a sly smile, "I'd love that. My brother doesn't even know I'm coming yet, so surprising him tomorrow works just as well for me. What were you thinking?" "Well I do love Karaoke, and I know the perfect bar in the city for it." "Okay! Let's go!"

Meredith and Misty chatted over their meals getting to know one another and realized they both have a lot in common, both are working to get away from controlling figures in their lives and have struggled with feeling trapped and helpless. Both women had been through many trials but had come out stronger than before. And tonight they would have an opportunity to let their hair down.

Meredith and Misty left the dinner brimming with excitement and possibilities. They babbled with one another as they drove the hour to Woody's and the city. It was decided they would get a hotel room for the night and Misty would meet her brother in the morning.

They arrived at the karaoke bar and sang duet after duet together, getting closer to one another as the night wore on. Finally it was closing time and the women stumbled out of the bar wrapped in each other's arms. Fortunately the hotel was within walking distance and they arrived safely.

As they made it to the room, they shared the first of many kisses and knew that tomorrow's problems were for tomorrow and they would enjoy each other's company tonight.

More stories from Savannah Rose Hannum and writers in Pride and other communities.