Was Shakespeare High This Whole Time?

Scientific evidence highlights that this may have been the case. 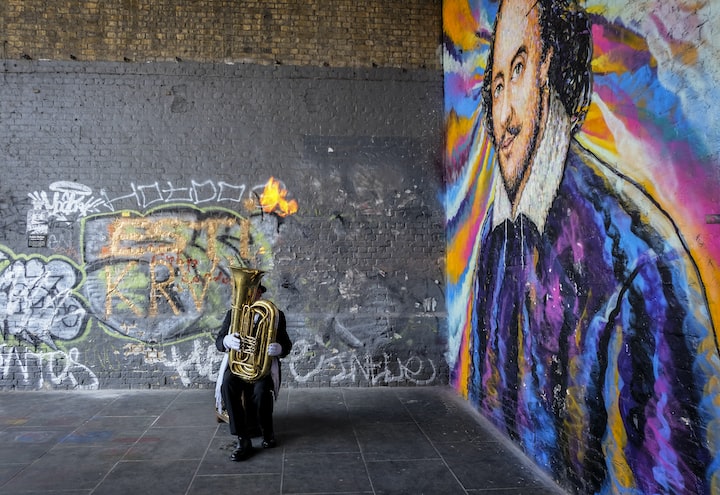 Photo by Jessica Pamp on Unsplash

William Shakespeare, also known as the 'immortal bard'. Heard of him? I'll consider you crazy if you haven't. He was (and still is) an extremely well-known English poet and playwright with his art dating back to the late 1500s. Some of his most famous and well-known plays include Romeo and Juliet, Macbeth, Hamlet, The Tempest and, Othello but he had written 39 plays and 154 sonnets in total.

Due to his never-ending fame and fortune, there is a theatre dedicated to Shakespeare called the Globe Theatre in London. I've been there before and I don't recommend you sit up high if you're afraid of heights, my legs were wobbling throughout the whole play.

It's been 400 years since Shakespeare passed away buthe is still a popular and worshipped artist. One reason as to why he is still famous is due to the themes he wrote about (e.g. love and history), they are still relevant in today's society. Secondly, he invented characters that could be easily adaptable to actors and easily improvised.

However, I heard through the grapevine that Shakespeare had a little something to help him with his creativity and assist him in his fame. Drugs, specifically weed and cocaine.

In 2001, South African research scientists who were from the Transvaal Museum in Pretoria, analyzed twenty-four pipe fragments found on the grounds of William Shakespeare’s final residence. Results showed that eight of the pipes tested contained traces of cannabis, two of the pipes contained traces of cocaine, some appeared to be laced with tobacco, camphor, and hallucinogenic nutmeg extracts high in myristic acid.

Fast-forward ten years to 2011, Anthropologist Francis Thackeray applied to exhume (dig-up) Shakespeare’s skeleton to try to determine whether he really did do drugs. Francis was also involved in testing the twenty-four pipes. However, this application was declined by the Church of England.

How do cocaine and weed boost creativity?

Please be advised that I am not presenting these facts to encourage you to go and snort lines or smoke weed to enhance your creative flow. Both (less so weed) are illegal drugs in the vast majority of countries around the world and can lead to bad, unforgettable, disturbing experiences and sometimes even death.

Evidence published in European Neuropsychopharmacology showed that cocaine does increase creative thinking, but not in an extreme way. You know when you brainstorm an idea on a piece of paper? This is how far cocaine will take you. It was proposed in the study that divergent thinking is enhanced by cocaine, so you should be able to think of multiple solutions to an idea/problem at once.

Secondly, weed also sounds like it doesn't do much for you either.A study dating back to around fifteen years ago found that around 50% of weed users reported that they think it does increase their creativity. However, a study published in 2012 argued that factors such as baseline personality, dose and how often the user smokes.

My personal experience with weed has left me starving, in fits of laughter, running down a corridor naked and seeing rainbows and ponies. No creativity in this corner.

Shakespeare himself had referenced drugs in Sonnet 76. For example,'and to keep invention in a noted weed' suggests that Shakespeare does need weed to think of something new. Another example is, 'to new-found methods and to compounds strange'. Hmm, sounds as if he was trialing a new bath of something illegal!

Within Sonnet 27, the line 'To work my mind when body's work's expired' implies that the poor guy has been working overtime and needs a little mental boost. In fact, the entire of Sonnet 27 has a synopsis of him struggling to keep awake in the night so he could complete his work.

Was Shakespeare high this whole time? Even without the forensic testing, he doesn't exactly keep it a secret in his writing. Even to this day, our greatest inventors, such as Steve Jobs, has admitted to taking LSD and marijuana to come up with the invention of the iPhone.

Sounds like I need a trip to Amsterdam to improve my writing...

history
Shamar
Read next: What is Black Cannabis?
Shamar