Revenge Is a Dish Best Served Warm and Gooey

by Kathryn Milewski 2 years ago in literature
Report Story 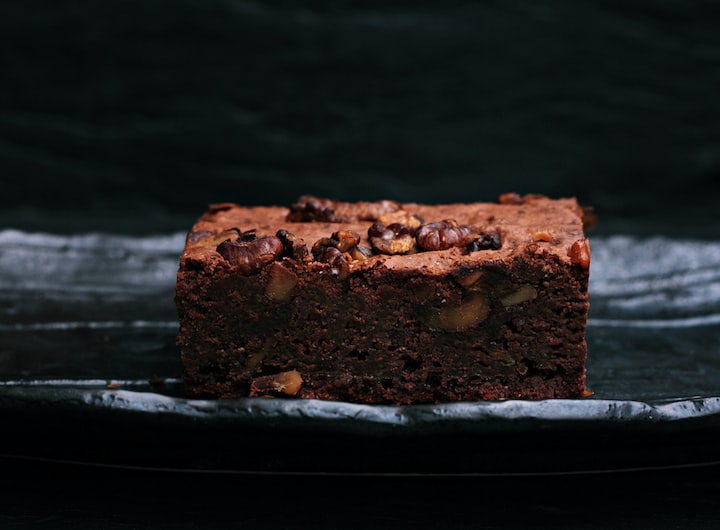 The smelly bathroom of Vinny’s wasn’t an ideal spot for an evening drug deal, but it was all Nicole had. She looked at her reflection while waiting for Randy the host to barge in. The first half of her double shift had turned her ponytailed hair into an oily slop atop her head, complete with a stretched-out scrunchie and dark brown tendrils falling into her eyes and mouth. She had been too busy serving rowdy toddlers and schmoozing tips out of dirty old men to fix her appearance.

Dollops of sweat rolled down the sides of her square ears, the back of her veiny neck, under the armpits of her tan diner uniform, and oddly, just below her nose. Those specific drops kind of looked like tears. Perhaps they secretly were; all her classmates were attending the biggest, most confetti-filled football game of the semester while she was forced to take the orders of burnt-out office workers and Karens who had nothing better to do than complain about the service.

Like hell, Vinny’s was open 24 hours a day, seven days a week. Waitressing for a shitty diner only made Nicole’s shitty senior year of high school all the more shitty. But it wasn’t like she could quit. College applications couldn’t pay for themselves.

The bathroom door creaked open. Randy was one of those thirty-year-olds who you wouldn’t think sold drugs on the side, yet had the lanky body and sexist sense of humor to pass for a dealer. He had a bald head and buck teeth. Workers at Vinny’s claimed he was the lovechild of a squirrel and a vulture, but Nicole found his ugliness strangely endearing.

“You look like shit,” he said while pulling an ounce of weed from his pants pocket.

“Can you stop being fucking late? Like for once? I’m ten minutes over my break, Amanda’s gonna kill me.”

Randy rolled his eyes. “Relax, chica. I take care of my customers in a timely fashion. I do the same for bathroom customers.”

“Said the man who took his sweet time pissing in the middle of last week’s deal.”

Randy shot daggers into her eyes, but not for long. Few had the willpower to hold Nicole’s gaze. She’d learned generously coating her eyes in black liner fended off attackers.

“Your ounce,” Randy handed her the baggy. “Cash?”

“Add it to my tab? Need to save money. Applying to three schools this week.”

Randy sighed, “You owe me over two hundred now.”

Randy shook his head, then marched out the door. Nicole stuffed the ounce underneath her white apron, listened to the soft water drops from the faucet. Drip drip drip. Once enough time had passed to ward off suspicion, Nicole bounced.

Unfortunately, Amanda - her petite manager with a Napoleonic complex - stood right outside. Her brown eyes turned black in their sockets.

Her tone was of the you’re in deep shit but you’re off the hook just this once variety. Nicole was on thin ice with Amanda from all her food stealing and horsing around with Carlos in the kitchen, but Vinny’s didn’t have enough waitstaff to afford firing her.

“Sorry,” Nicole whispered. Hopefully Amanda didn’t think she was blowing Randy in the bathroom. To peers, Nicole was already a “burnout” and a “bitch.” She didn’t need “teenage prostitute” added to the list.

“Take the customer at table ten?” Amanda asked, “Leah just got off her shift. He’s been complaining about the food, which is a pain in my ass. But you just need to ask him for desert, the check, and he’s gone.”

Nicole nodded and got to work. Vinny’s had that classic 1960’s look with its checkered floor, neon lighting and jukebox in the back, but it was too greasy and asymmetrical to be considered “pretty” by Pinterest standards. The diner was mostly empty, as it was 9 pm and most of the old farts who lived in Toms River were already asleep. But at table ten, Nicole saw her worst nightmare. A middle-aged man with pinkish skin, hollow cheeks, and the sharpest tie in the world hung around his skinny neck: Mr. Bruno.

A stack of papers sat on the table. Red marks everywhere – clearly, yesterday’s Midsummer Night’s Dream test. Mr. Bruno put the pen down and looked up from his grading.

“Ah, Nicole,” he said with that funny monotone voice of his, “Didn’t know you worked here. Surprised you’re not at the game. My classroom’s next to the field. Very loud outside, so I moved.”

Nicole nodded, “Yeah, if I didn’t have to pay for college applications this week, I’d totally be there.”

“College applications?” His curiosity was surprising, considering he was the only teacher at Toms River High who refused to give letters of recommendation to students.

“For NYU, Georgetown, and Stanford.”

He sucked his teeth. “Interesting choices.” Clearly, he didn’t think she could get into any of those. In fact, he was the one standing in her way: Nicole was passing every class except his. English wasn’t even her worst subject.

“Here,” Mr. Bruno said, handing her a paper from the bottom of the stack, “just graded yours.”

A big fat C- was at the top of the first page. Nicole flipped through her answers. She’d only missed a few multiple choice. Her low score remained a mystery…until she got to her essay. It was covered in a sea of red ink.

“I don’t get it. I got the summary right. I answered all the prompts up top.”

“Yes, you got the summary right,” he said, “but you used passive voice for the whole thing. Can’t do that.”

Nicole felt her blood pressure rise. “But you just asked for a summary. That’s kind of unfair, Mr. Bruno.”

He crossed his arms, “Miss Rollins, Stanford professors will bring down the scores of your essays if you use passive voice, just like I have.”

A pointed laugh escaped her lips, “I honestly doubt that.”

The silence which followed felt deafening. Mr. Bruno looked like he was about to flip the table over. His gaze was far sharper than Randy’s, and way more painful.

“Aren’t you supposed to take my order, Miss Rollins?” he asked.

“Fuck him. When I was in high school, we used to put Vaseline on the door handle of his classroom. Total ass,” Carlos said while flipping a burger on the grill. He was the only cook left in the kitchen. A twenty-five-year-old Peruvian man who worked to pay for him and his baby mama’s living expenses, he was Nicole’s only friend at Vinny’s. He also refused to wear a hairnet despite Amanda’s insistence. Instead, he kept his long mane underneath a Yankees cap he wore backwards.

“I want to spit in his food,” Nicole growled. She ripped out a paper from her notepad and placed Mr. Bruno’s desert order - a chocolate brownie sundae – on the counter next to Carlos’s grill.

“Don’t bother, he’s probably used to the taste,” Carlos chuckled. He looked down at the note. “Brownie sundae? Really?”

“He’s had a rough week, apparently.”

Nicole sighed, rubbed the back of her aching neck, and removed the baggy of weed from underneath her apron. “Ugh, I really want to smoke this right now.”

Carlos’s eyes widened at the sight, “Hell yeah, we could all use summa that right now.”

“Even Mr. Bruno,” Nicole chuckled. Carlos laughed at the remark. Then suddenly, his face went blank. She saw a light bulb flash in his head. Perhaps it was telepathy or her keen intuition into Carlos’s immature thought process, but Nicole already knew his evil plan before he could verbalize it.

“Because we’ll get in trouble with Amanda. Isn’t it illegal?”

“One, not if we get caught,” Carlos reasoned, “and two, Amanda can’t do shit. We’re the only half-sober workers keeping this dump afloat.”

Nicole shook her head in anxiety, but deep down, loved the idea. Who didn’t want to see Mr. Bruno baked?

“Will it take forever?” she asked.

“Nah, fam. Used to be the designated brownie cooker in college,” Carlos smiled, “I’ve got a recipe that’ll only take five minutes. I need half an ounce.”

“Chocolate brownie sundae,” Nicole said in an angelic tone as she placed the creamy creation on Mr. Bruno’s table. He was still grading papers, and didn’t look up.

She scurried back to the kitchen, trying her best to hold in giggles. There was a small window between the kitchen and fountain drink area where Nicole and Carlos could peek out as they waited for the cannabis to kick in.

“How much did you put in that brownie?” she asked Carlos. He winked.

“As much as reasonably possible.”

Mr. Bruno took bites of his desert between finished tests. For the first hour, he carried on with work as normal. But when the clock struck eleven, his eyelids drooped. Short scribbles on tests became long, drawn-out strides. He stared very intently at nothing with a slack-jawed expression. Barely blinking, he watched cars drive by as he picked his teeth with the prongs of his fork. Minutes later, he rolled his head back and stared at the ceiling as though cloud gazing.

It was hard to tell if he was about to pass out or if he was sleeping with his eyes open. Regardless, Nicole’s gut was burning from laughing so hard. It got even funnier when a Boomer near Mr. Bruno’s table watched the scene with a disturbed expression. When he left Vinny’s, Nicole saw him shake his head in disgust.

“He’s so fucked up,” she said, high-fiving Carlos. He gave the biggest grin in the world.

“This is better than television. Revenge is a dish best served warm and gooey.”

He took the chair across from Mr. Bruno. “Hey Pops,” Nicole heard him say, “got your text. Couldn’t get a ride from the game, so here I am.” Mr. Bruno didn’t reply. His dazed expression barely changed. Jerry’s brows furrowed. He snapped in his father’s face.

He saw the brownie sundae. Noticing his mouth water, Nicole bolted out of the kitchen as Jerry picked up his father’s used fork. Compliments to Carlos’s culinary skills, but she did not need another victim getting high as a kite in one evening.

“I’ll take that away for ya,” she smiled while snatching the plate from Jerry. “The check?”

“It was soooo deliciousssss!” Mr. Bruno drawled. His tone was up an octave, like a valley girl's. “Here!”

He pulled out a leather wallet from his pants pocket and handed over the fattest wad of cash Nicole had ever seen. Her jaw dropped when she noticed the Benjamin Franklin on top.

“Your tip! It’s aaaallll yours! For applications!”

“Dad, what are you doing? She didn’t even give you the check!” Jerry yelled. Mr. Bruno just giggled.

“Everything okay?” Nicole heard Amanda’s voice behind her and immediately took flight. She ran back over to the kitchen. “Sir, have you had anything to drink tonight?” Amanda said with concern.

“Punch me out?” Nicole winked at Carlos. He gave a cheesy salute.

Before escaping to her car, Nicole handed over the Benjamin Franklin to Randy, who was casually smoking a cigarette in Vinny’s parking lot.

“This should cover that ounce for today,” she smiled, skipping away in devilish delight.

More stories from Kathryn Milewski and writers in Potent and other communities.