RR
by Richard Rockell 5 months ago in art

You don't need to leave home to find a good pic.

I don't have a great camera or even a great eye. So I try to look closely at things. Take the background away or the foreground and see what I want to see. Sometimes it isn't easy but when the mood strikes me I have always been able to get a great shot close to where I am. Even a poor subject can reward the photographer if you take it from various angles or lights.

This tree I have shot hundreds of times. In the fog, sun, near dark and the rain. All the seasons round. I can't get a good dusk shot but hey, nothing's perfect. The trick is to use whatever settings you can change on your camera and take a lot of pics. My rule of thumb is it takes 10 pics to get a good one. 100 pics to great a great one.

Ad far as light goes, early morning or near sundown are great. Partly because of the angled light, also because of the lower light levels. Full sun in the middle of the day is that hardest. Glare coming off anything bright means the camera settings can't be prefect. Either the object will be right and the rest too dark or over-exposed. I don't shoot people much, not my thing. What I've learned though is that they're hardest of all in bright light.

Talking about people shots, I get my best when they don't know I'm shooting. Natural behaviour shows in the picture. The difficulty in that is they don't know you're shooting, so they move. Just take more pics. I've tried using the sports mode so I get rapid fire shots in a row. The difficulty with that is the quality and the focus. Rapid shooting means usually that the aperture is pretty wide open so light can ruin the shot. Also the focus will often drift out as the processor on the camera can't keep up with the speed of the shots.

My own laziness has taught me to do a basic edit when I download my pics to the computer. Get rid of the blurred and the badly lit ones. Then the duplicates where one is better than the rest. That will normally get me down from a hundred to ten. I save them rather than make a decision on the day and regret it later.

Before you delete make sure you've seen the pic properly; e.g you may have taken a pic of a tree but missed the fact that you've got a great small pic of a bird or flower. Cropped properly they can make neat little pics. So like taking a photo, where you frame the picture with your hands, frame the pic so you can see the things you'd miss otherwise.

The real truth is that I never delete permanently, anything. I move them to a file that now contains thousands of poor pics. From there I have rescued a couple of good ones that others have liked. Tastes differ.

Bottom line, if you haven't got your camera with you you will miss awesome shots. So leave early if you're travelling, so you have time to stop. Don't be in a hurry when taking pics, that head state is no good for getting good shots.

My reason for taking photos? It exposes me to the beauty around me and lets me see it when I might have missed it otherwise.

So, if you always want something to do, no matter where you are take a camera. Except a secure facility, they frown on that.

For me, people wear me out so I can refresh even when I'm away from home, just by disappearing into my own camera and shooting experience. The plus is that you can gift the shots to the people you're with, so they forgive you for not being fully present. I find new things of beauty and they get shots of their home, or garden. Winter can be tough but if there is any sort of greenery there's usually something living there. 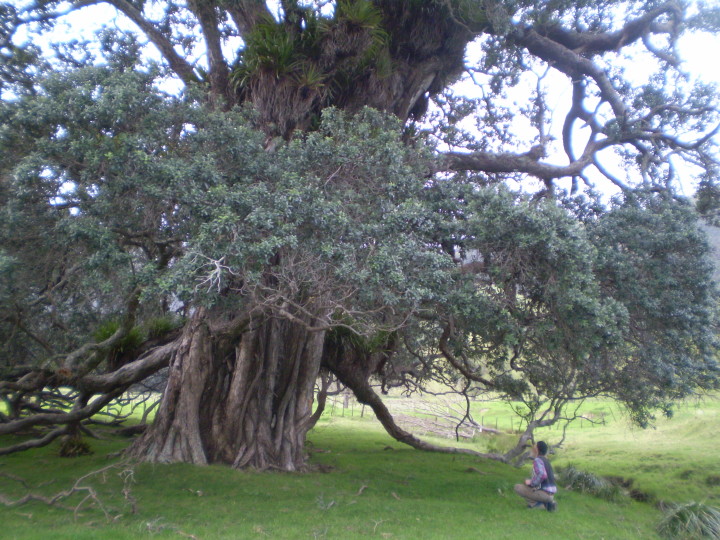 The pic above is a poor one. The light was really harsh and the camera near it's end. Even so I wouldn't throw the pic away, partly because it contains a friend and a great tree. Partly for the lesson. One of which is when the scale of things isn't apparent, put something in the pic to give scale.

Remember, people like different things. I've got an engineer friend so he's taught me what he's interested in so I can recognise it and get shots. Flowers are always great but gardeners are interested in more than just flowers. Taking pics of every species, even the weeds is interesting to them. You can also build a collection. So if a letterbox is unusual take the pic and file it for when you have enough.

That's the next thing. We've all got terabytes of data but then finding pics can be tough when you've got them in the thousands. So spend some time whenever you have a moment and work your files. File pics in relevant folders and if they fit in more than one folder either duplicate it or tag it. One of the things I do is use some old monitors or screens and run slideshows of your pics. It keeps the room lively with movement and every now and then you'll see an old photo in a new light. Remember, we're out there looking for the beauty and the gems can be just a tiny part of a photo.

I have one rule I always stick to. Never use digital zoom. You aren't improving your photo and you are throwing away part of the pic you take. That part may be the piece that makes it great. You can crop later. Other than that I break every rule there is. Keep one thing in mind though. If you point your sensor at the sun you will be degrading it faster than it would ordinarily. They do degrade so you will need to buy a camera again about every five years. I try to do it more often as better comes along. So don't be buying the very best camera unless you can afford to do that every five years.

You can do lots with editing programs but I like to keep it simple. I'm in it for the beauty not the opportunity to learn how to use another frustrating program. Listen to what others say but don't be disheartened, some only know how to criticise and the rest don't have your eye.

So have fun, use your eye and focus in till you see the beauty.