by Thomas Smith 2 months ago in camera

Some are practical, and some are downright experimental 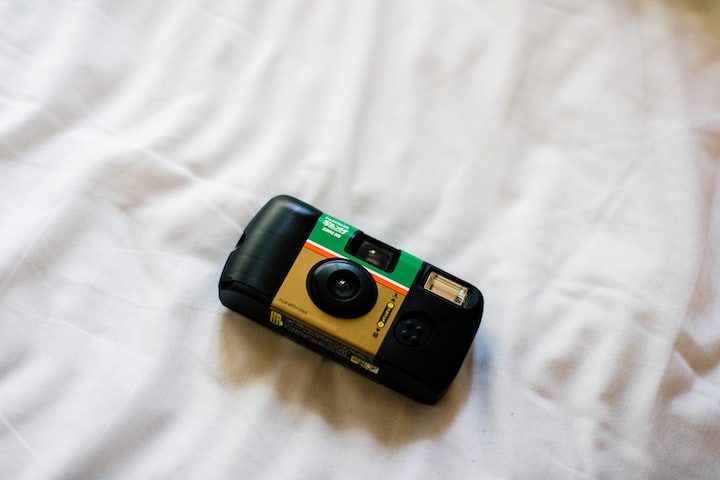 Photo by bady abbas on Unsplash

Remember the venerable old disposable camera? If you grew up in the 1990s, you definitely do. These cheap little plastic-based, paper-covered cameras were ubiquitous throughout the 1980s and 1990s — although they were actually originally conceived in 1880, almost 150 years ago.

Think disposables have gone the way of the Betamax (or the CD)? Think again. Disposable film cameras are still alive and well in the 2020s. Here are five ways that disposable cameras as still used today.

Back in the day, most disposable cameras were pre-loaded with a cheap, all purpose film like a 400 speed Kodak Gold or Fuji Superia. Don’t get me wrong — these are great films. I love the balanced, understated colors on Kodak Gold, and many people feel that Fuji Superia’s rendering of skintones is underrated.

These are both great films, but they were designed with a specific purpose: to be as versatile as possible, allowing amateurs taking snapshots to capture usable, beautiful photos in as many lighting conditions and shooting situations as possible. That made them a great fit for snapshot cameras like Kodak and Fuji’s disposables.

Today, though, disposables are catering to a more niche, experimental audience. And so the films that they’re loaded with — in some cases anyway — have changed. Legendary film company Ilford, for example, offers disposable cameras loaded with their professional HP5 and XP Super black and white films.

The idea here is that film enthusiasts who haven’t tried Ilford’s products can grab a disposable camera for less than $15 and test the films out. If they like them, maybe they would buy more of Ilford’s films for their main cameras. These high-end disposables are also a great fit for an event photographer who wants to snap a few artsy shots on black and white film at a wedding, but doesn’t want to bother with loading a whole SLR with the stuff.

Lomography offers disposable cameras for a similar audience, including cameras loaded with the company’s Lady Grey black and white film, and with highly experimental films like Lomochrome Purple, which gives a purple color cast to photos.

Unlike disposable cameras of the 1990s, Lomography’s models are designed so that the original film in the camera can be removed, and the camera can be reloaded with any film the user chooses. This makes them a more economical choice in the long run, despite costing about double what Ilford’s cameras cost.

If you want to test out a new type of film — or dip your toes back into the analog world after a move to digital — disposable cameras loaded with high-end or experiment films can be a great tool to add to your camera bag.

Not too many events are happening right at the moment, with Covid-19 continuing to rage worldwide. But increasingly it’s possible to hold outdoor, socially distanced events in many jurisdictions, and people are beginning to find ways to gather (safely) again.

Many people hire a professional photographer for their wedding, bar mitzvah, or other major event. But a lot of people also want to get candid photos from their guests. A whole range of apps now exist to collect photos from friends after an event, but getting people to actually use them can be a challenge.

A different tried-and-true solution is to place a disposable camera at each table at your event (and especially good choice if each family needs to be socially distanced), and encourage your guests to take candid snapshots throughout the event. At the end, you can get all the cameras developed, and have potentially hundreds of candid moments captured for the ages.

To address this need, several companies offer disposable cameras with customized coverings that fit different event themes. There are disposable cameras with wedding themed colors, ones for baby showers or bridal shows, and much else. Because each camera is inexpensive, it’s okay if a few get dropped or damaged (or mistakenly taken) by guests.

The shots you get from these won’t replace the work of a professional event photographer, but for less than $20 per camera with development, it’s a great way to get some extra, interesting shots at your event.

Imagine that you’ve been in a fender bender. You want to document what happened for your insurance company. You could take snapshots on your cellphone, but what if it’s out of battery? Or what if someone later disputes your digital photos, claiming that you applied a filter, took them incorrectly, or otherwise corrupted them? Or what if your phone camera can’t capture enough detail, or it’s nighttime and you’re stuck relying on your phone’s puny flash?

Addressing these concerns, several companies have begun offering “vehicle accident kits” which include a disposable film camera. The idea is that you can keep the kit in your car, and if you get into an accident, you can use the disposable camera to take photos for your insurance company.

Because the camera is always there and ready, you don’t have to worry about your cellphone taking good enough photos, or being charged. Most kits include a camera with a standard flash — instead of the tiny LED flash on your phone — so the cameras should be able to take photos even at night in low light. And because film cameras produce an original negative which is hard to alter or change, no one can claim that you mistakenly applied a filter to an image or used some incorrect setting down the line.

A disposable camera is a cheap, easy way little bit of extra protection in the case of a minor accident.

Lots of people want to take photos underwater, whether it’s of tropical fish at a reef on a vacation, or just their kids diving at the pool. There are plenty of cases out there for iPhones that say they allow you to take your phone underwater for photos, and you can get an underwater housing for many high-end cameras.

But these are often bulky and expensive. And you’re just one leak away from ruining a $3,000+ photographic investment. Unless you’re a dedicated underwater photographer, risking your personal device or using a housing or enclosure can seem like risky or expensive options.

Another alternative is to use an underwater disposable camera. Both Kodak and Fujifilm make these. They’re basically a normal disposable camera wrapped in a waterproof enclosure. They cost a bit more, but they’re a great solution to take snapshots underwater. They can also be a great option for a trip to the beach, where sand and spray could easily damage your pricey professional camera.

Because the camera is disposable, even if there were leaks in the housing or you damaged it while diving, you don’t need to risk your more expensive gear. Lomography is even releasing an underwater version of their popular disposable cameras.

Maybe you used to shoot film, and switched to digital for your professional work. Or maybe you’re a younger photographer, and you never worked in the film world.

Whatever your background, many photographers are either returning to film or trying it for the first time, based on a love for its unique characteristics, a passion for vintage cameras, or just the desire to add another tool or style to their photographic repertoire.

If you’re a digital shooter who wants to dip your toes into the film world without investing in a film camera, disposables are a great option. You can try out the process of film shooting, develop your photos with a professional darkroom or at home if you use a camera like Lomography’s Simple Use disposables, and decide if you want to invest more time and expense into purchasing real gear.

Disposable cameras are also great for introducing your kid to shooting with film, since even if they drop the camera or lose it, you’re not risking expensive gear. Disposables are also extremely simple — much moreso than basic digital cameras. They usually only have 2–3 buttons, which are easy to press and intuitive, so they’re a great way to introduce the craft of photography to tiny hands.

Far from fading out, disposable cameras are still used for all kinds of applications here in the 2020s. They range from pragmatic (evidence gathering) to creative (using a Lomography camera loaded with funky purple film). There are even new innovations happening with disposable cameras, like Ilford’s creation of cameras with professional-grade film.

If you do decide to shoot with a disposable camera, you may be able to get it developed locally. For pro-quality results, I recommend The Darkroom, which offers special services for developing and scanning disposable cameras by mail.

If you haven’t tried one in years — or have never tried film at all — decide on a project or subject, choose a disposable, and start shooting!

This article originally appeared in The Grain.

See all posts by Thomas Smith →