by Gary McBrine 4 months ago in film

Digital Photography “took my Kodachrome away” 🎵 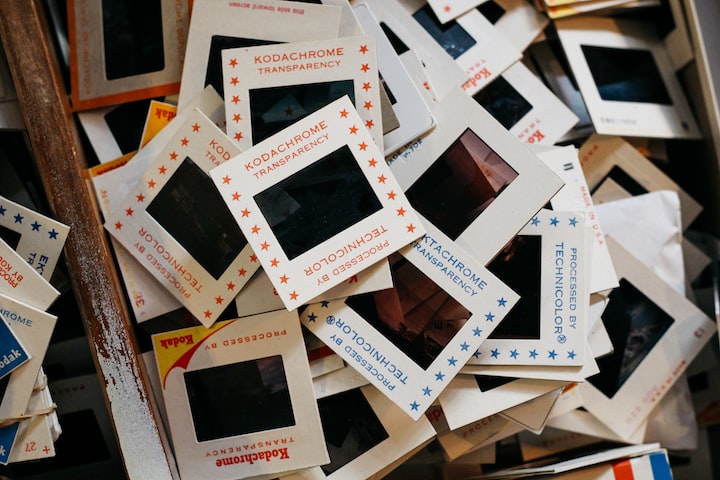 Do you remember slide film? Also known as ‘reversal’ or ‘transparency’ film, it was a color film that produced a positive image rather than a negative. You could usually recognize a slide film if the name ended in chrome—for example, Kodachrome, Ektachrome, or Fujichrome.

In 1973, Paul Simon wrote a song called “Kodachrome.” He sang about the “nice bright colors” and how it made “all the world a sunny day.” It was a beautiful film producing deeply saturated colors and fine grain quality. I loved it.

When I started shooting color film, I knew that most professionals were using Kodak Kodachrome, so I used it too. It was available in either 25 or 64 ASA film speed. Years later, they also made 200 ASA. Today we speak of ISO for film speed. In those days, it was ASA. It means the same thing.

I’ve learned many lessons about photography by shooting slide films. These lessons have improved my digital pictures too. It has made me a better photographer.

Here are 4 lessons I learned from shooting slide film that will help you be a better photographer, whether you shoot film or digital.

Adobe Photoshop changed the world of photography by making it possible to “fix” a photograph on the computer. This has led to the now-common phrase, “I’ve got an app for that,” and the attitude that “I can fix it later.”

There’s a generation of photographers today that are lazy. When they take the picture, they plan to crop the image or fix the exposure later. Especially when shooting in RAW format in their cameras. It’s easy to boost the exposure and change the color temperature in the software.

When shooting slide film, the film that went through the camera would get developed and mounted in a small frame, and that’s your image. There was no option to “fix it later.” You had to get it right when you took the picture.

Can the same way of taking pictures benefit you today with digital photography? Of course.

Here are some basic principles that are equally important whether you shoot film or digital pictures:

“There is no better time to crop a bad composition than just before you press the shutter release.” — Bryan Peterson — From the book: “Learning to See Creatively: Design, Color & Composition in Photography”

Good composition is how you arrange the elements in a photo and what you include in the frame. Sometimes it requires you to find the best viewing angle and decide what not to have in the picture.

Digital photography can be very forgiving because it’s so easy to crop the image on your computer. The problem with that is you are cutting off many of the pixels from your high mega-pixel camera. This results in a lower resolution picture.

A better solution is to think like a Kodachrome shooter. Compose your picture as if it is the final image that will be printed and hung on your wall. Then you will have the best image quality your camera can produce.

Digital photography offers a lot of freedom with exposure if you shoot in raw picture format. Is the image too dark? Just boost the shadows in Adobe Lightroom! Unfortunately, when you do that, there is a loss of quality. Why?

Bear with me for a moment while I get a little technical.

A digital picture is a recording of the signal received from the camera sensor. When the picture is underexposed, there is not much signal there. When you amplify (boost) that low signal in your computer software, you’re amplifying noise along with the signal. That produces a grainy appearance in the picture. It’s called “noise.”

It’s much the same as when shooting slide film. Get the proper exposure “in camera,” and you will be a happy photographer.

So I learned to be more selective of what and how I took a picture. I didn’t let that inhibit me, but I didn’t want to waste film either. If I had a few good pictures from a roll, I was usually happy with that.

We now have almost unlimited potential to take as many photos as we want. The only limitation is the size of the memory card and the charge on our battery. The pictures cost almost nothing, and if you hold the button down, you can shoot hundreds of pictures in a minute.

The downside is there’s often less care when taking the picture. It can become more of a machinegun approach, hoping to get a good shot by chance.

Some people call it "spray and pray" that you'll get a good picture.

You will produce the best pictures when you care about each shot. In the days of shooting slide film, it was my wallet that made me slow down. I eventually learned the benefit of making every shot count instead of counting many shots.

I miss shooting Kodachrome. As Paul Simon expressed in his song, “don’t take my Kodachrome away.” But it’s too late. 😢

I am grateful for the lessons I learned from shooting slide film, especially Kodachrome. It definitely made me a better photographer. I hope some of these lessons can benefit your photography too.

I'm a writer, a photographer, a musician and an ESL English teacher. I have three decades of sales and management experience and run my own Audio Video home technology business. Check out my other articles: https://medium.com/@garymcbrine

Read next: What to do if my passport is expiring