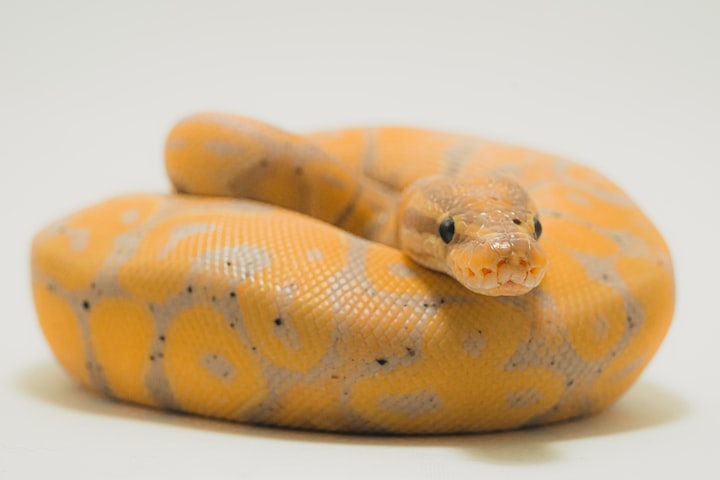 I remember when I first ventured in to the reptile hobby, I only knew that I wanted a snake. I had never owned one and only knew that they ate mice. That was it. I didn't know what kind of snake I wanted nor did I know how to properly care for one. So, like anyone else that is new to the hobby, I went online and did some research. I went on youtube, I looked up several articles and I engulfed myself in all things "snakes". As time went on, I learned a lot about morphs, how often they ate and what kind of husbandry they required. As time went on, I was more and more fascinated by the different reptiles I was able to keep, researching on how to properly care for them and it eventually led me in to helping others pick out their first pet reptile. I really enjoyed (and still do) educating people on the topic. So here are my top 5 favorite reptiles to care for if you're a beginner. Enjoy!

Ball pythons are also known as "royal pythons" because at one point ancient royalty liked to wear them as jewelry. They originate from west and central Africa but have become popular pets in Western countries. They can get to be about 3 to 6 ft. long, feed on mice about once a week, are nocturnal, non-venomous and live as long as 30-45 years in captivity.

Ball pythons are named after their natural defensive behaviors. They tend to curl up into a ball with their head toward the center of the ball when they feel threatened. With proper socialization, they can be easily handled and are very docile snakes. A lot more so than most!

These guys are very popular amongst breeders in the hobby everywhere. There are a large variety which are called "morphs" and they come in a vast variety of colors and patterns. It would be easy to see why some people can't seem to stop at buying just one or two. I know when I was involved in the hobby, it was pretty easy for me to get carried away. They don't require a lot of time or attention, are gorgeous creatures and are one of the easiest reptiles to care for. What's not to like?

Next up on my list is the adorable Crested Gecko or otherwise known as the "Eyelash Gecko". This is a species of gecko native to southern New Caledonia. In 1866, a French zoologist named Alphone Guichenot first talked about and described the crested gecko. The Crested Gecko was thought to be extinct until Robert Seipp rediscovered the species on an expedition in 1994.

Crested geckos do not have eyelids. Instead they have a transparent scale, or spectacle which keeps each eye moist. They use their tongue to clear away any debris. Crested geckos have webbed legs and digits. When stressed, their tails will fall off and they do not grow back. When a Crestie doesn't have a tail, they are called "frog butts" (LOL). They are an arboreal species, preferring to inhabit the canopy of the New Caledonian rainforests, and because of this they can jump considerably well (So be especially careful while handling them!).

Crested Geckos are primarily nocturnal, and will generally spend the daylight hours sleeping in secure spots in high branches.

Crested Geckos have a diet of mainly fruit and an array of bugs. In captivity they eat commercially prepared, fruit-based diet with live feeder insects as a supplement. They are especially cute when they eat their smoothie-like meal. I used to love watching my little guy, Echo eat after putting his food in his enclosure. So cute!

The name "bearded dragon" refers to the underside of the throat of the lizard, which can puff out and turn black for a number of reasons. This is most often because they feel threatened or as a result of stress. When they are happy, they have flattened down scales that almost feel smooth to the touch. Beardies are omnivorous reptiles, eating a variety of things: leaves, fruits, greens, flowers, and pieces of meat, including rodents, small lizards and insects such as cockroaches, crickets and mealworms.

These curious looking creatures originate from the desserts in Australia but weren't introducted as pets until the 90's. They are one of the most popular reptiles to have as pets and a lot of times be seen hanging out on their owner's shoulder, tagging along for the ride.

If properly cared for, the Bearded Dragon can live 10-15 years in captivity and a fully grown beardie can grow to be about 17 inches long, on average.

They definitely make my top 5 list because they are cute, curious, easy to handle and are quite unique.

The Leopard Gecko is a terrestrial species originating from the dry grasslands and the desert regions of Iran, Pakistan, India, Nepal and Afghanistan. The lifespan for these cute little critter averages to about 22 years in captivity and around 15 years in the wild. Unlike most other reptiles, they have eyelids. Other characteristics include, thin toes, large heads and large, oval shaped pupils. They are solitary and do not usually like sheltering with other animals. When they are agitated, they have a kind of small "bark" but are not as vocal as other species of geckos. If you want a pet that is docile and easy to train for handling, these little cuties would be perfect!

Leopard Geckos are nocturnal. They shelter under burrows or rocks during the day light hours and come out at night in search of food. Their diet consists of mealworms, waxmoth larvae, crickets and grasshoppers.

There are a lot of reasons the Leopard Gecko makes such a great pet for beginners. If their basic needs are met, you can leave them alone for days at a time, they don't smell, you don't have to bathe them, they are quiet and super cute! Who wouldn't love looking into those big googly eyes? I know I definitely would. I previously had two of them and as a reptile enthusiast, they are some of my favorite pets to keep. They are amusing, easy to handle, affordable and simple to care for. The perfect combo!

The corn snake is a species of non-venomous snake which are normally found in the South Eastern part of the United States. They are docile and a colubrid species which means they can move very quickly so pay extra attention while handling them! The Corn Snake gets their name because of distinct black and white markings under on their underbelly.

While superficially resembling the venomous copperhead snake, they are often killed as a result. The fact of the matter is that they are actually very beneficial to have around because they help control populations of wild rodents that spread disease and damage crops.

You will be able to find the typical Corn Snake hanging around trees, overgrown fields, abandoned buildings or farms and are diurnal which means they are most active during the day.

Once Corn Snakes are fully grown, they can range from being around 2.5-5 feet long and have a life span of around 5-10 years but sometimes longer. Much like the other reptiles mentioned here, they do not need a lot of time and are not super expensive to keep.

So, whether you decide to start out with a ball python, an adorable crested gecko, curious beardie, or a corn snake, you are pretty much guaranteed to fall in love with these little critters. Even if you don't have them out and don't intend on handling them all the time, they are pretty cool to see in action and when they're on the hunt for food. I do want to ask you guys that if you decide to take the plunge, please do all the research you can. Immerse yourselves in videos and articles and make sure you get a really good grasp on how to properly take care of these little creatures. I will definitely be working on care sheets in the near future! Once you've done that then the fun begins! You get to pick out your first reptile. Congratulations! I'm almost positive it won't be your last one.

A Queer, Mexican American writer/artist who enjoys black and white horror films, animals, swearing, giving her opinion with no filter and drinking copious amounts of coffee.