by Jenna Deedy 6 months ago in wild animals

Munchkin, a company that is known for making products that are aimed at both babies and toddlers is facing criticism for having ties with radical anti-zoo groups.

Munchkin is a company that is known for making products made for everyday use for toddlers that was first established in 1991 after it’s founder Steven B. Dunn was surprised by the lack of “creative” designs in products that were made for infants and toddlers. While the company started out with making eco-friendly sippy cups, the company has since gone on to make organic snacks and formulas along with travel accessories. However, in recent years, as of 2015, the company has been under fire by both zoo and aquarium professionals alike over its ties with a radical anti-zoo group.

So, What's The Story?

In 2015, Dunn announced that his company would make a $1 million pledge to the animal rights group, The Whale Sanctuary Project, in order to build an ocean-based “sanctuary” for killer whales who currently reside at marine zoological facilities. He said that he was inspired by watching the film Blackfish to make such a pledge. Since then, Munchkin has gone on to make products that feature orcas, and other animals that would not only raise awareness about animal “rights,” but also benefit these radical groups as well.

Then, on August 11, 2019, zoo professional Kiley Brough started to urge parents to boycott Munchkin’s products after she had stumbled across an orca sippy cup that contained a tag that featured false, or, inaccurate information about killer whales, and how they are raised in human care. In the tag, Munchkin made false claims about how cetaceans in human care “suffer” from various issues relating to life in an aquarium when studies have since proven otherwise and trainers and veterinarians are always looking for new ways to enrich their animals that would keep them stimulated, healthy, and active throughout the day.

Another piece of false information that also caught Ms. Brough’s attention is the information on the life span of wild orcas. In the tag, Munchkin states that wild orcas can live to be 90 years old when it is not their average lifespan. In fact, studies by NOAA has shown that the average life span for both wild and captive orcas is around 30-45 years with the maximum lifespan being 55+ years. That would almost be like a person living to be over a hundred years old. Yet, keep in mind that researchers don’t often count calves in any lifespan statistics since 35 percent of all orca calves die during the first year of life, and in some parts of the world, this statistic is only getting worse. For example, studies that have been done on killer whale calves born into Pacific Northwest populations show that they only have a 50/50 chance of living to see their first birthday comparing to the 90 percent survival rate that calves born at well-managed facilities have. Yet, it can never really be a 100 percent survival rate for various reasons, just like with human babies. 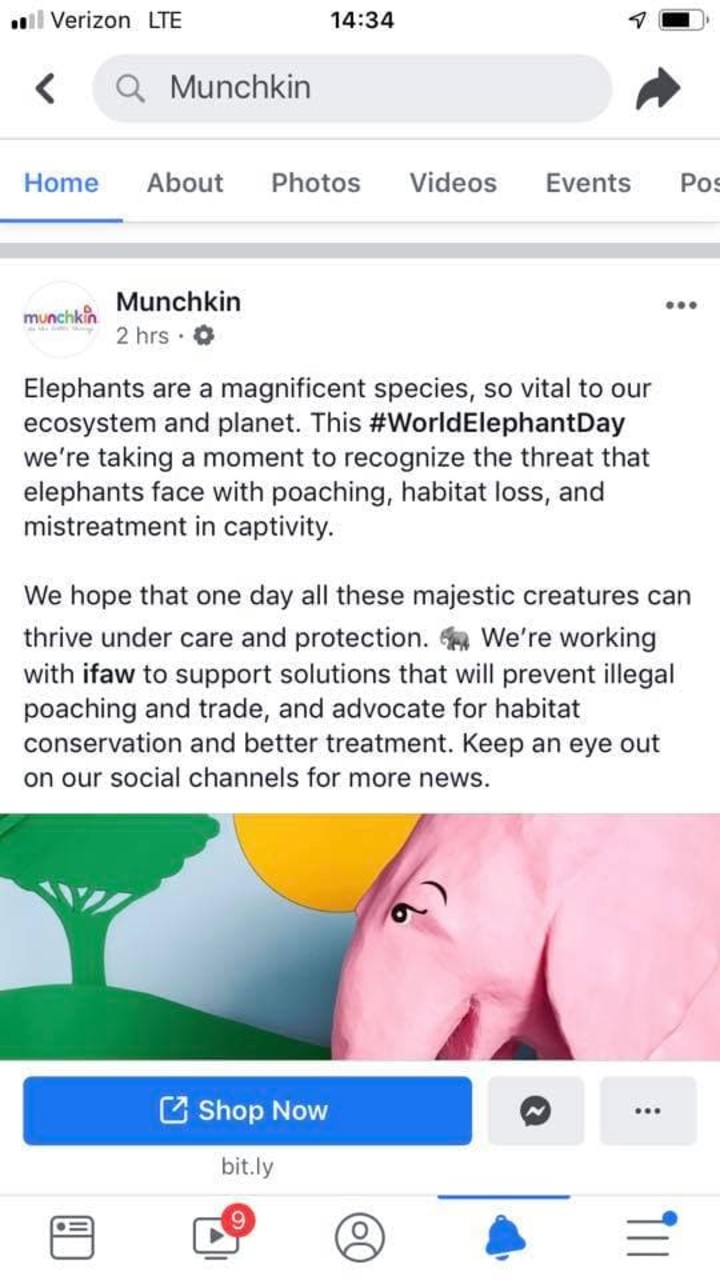 Another piece of anti-zoo propaganda that Munchkin put out involves the keeping of elephants in human care. When Ms.Brough went on to investigate Munchkin’s social media pages, she was shocked by its claims about elephants being threatened by simply being kept in zoological facilities. This has caused a major backlash by zookeepers who specialize in elephant husbandry and care who were concerned about how the company was caving into anti-zoo propaganda rather than actual facts regarding elephant biology, conservation, and how they are cared for in a zoological setting.

To anyone who is specialized in elephant care, Munchkin’s anti-zoo agenda could do more harm for wildlife conservation than good by shaming and stigmatizing zoo professionals, wildlife educators, zoo-based veterinarians, and biologists while adding a guilt trip to parents who often bring their kids to visit zoos and aquariums.

To date, there are about 160 African and 140 Asian elephants living at more than 60 Accredited zoological facilities in the United States and Canada. These facilities are dedicated to caring for elephants based on humane and science-based methods that meet professional standards of animal care and management with the commitment being personified by many zoo professionals. Also, like with cetaceans, zoological facilities have an amazing opportunity to contribute all knowledge of elephants by studying their health, nutrition, welfare, general physiology, behavior, and reproduction in hopes to better understand the species and find better solutions to protect troubled wild populations in Africa and in Southeast Asia.

Is Munchkin being hypocritical? 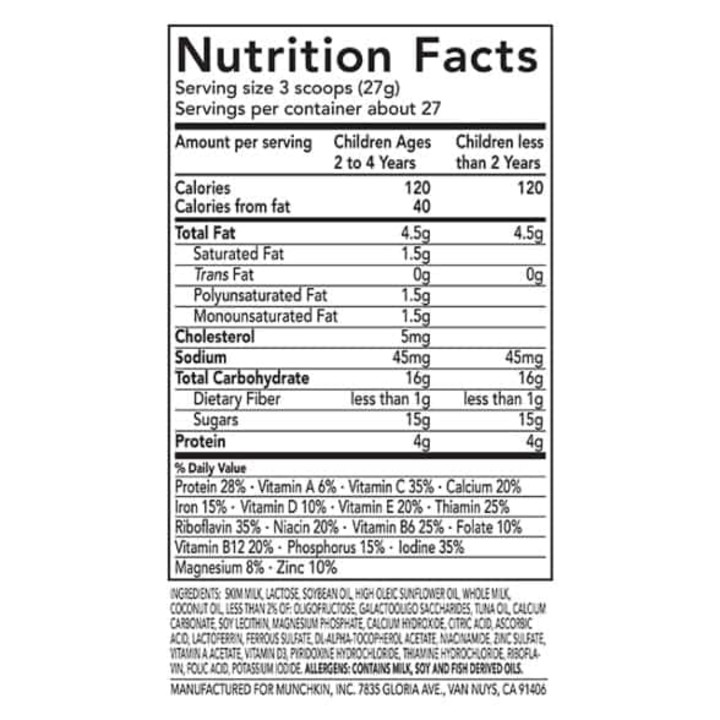 Nutrition facts for a toddler formula that contains tuna oil, but no information as to where this particular oil was sourced from. Screenshot by Cynthia Swisher.

Although Munchkin claims that many of its products are eco-friendly, one user on social media pointed out that one of its main ingredients that the company uses for its toddler formula, which costs around $35 a can, may not be that eco-friendly at all. The ingredient in question just happens to be tuna oil. In its nutrition facts, there is no information as to where the tuna oil was sourced from, nor, if it is “dolphin-safe.” Yet, the only information it provided was the fact that the formula was manufactured in New Zealand.

Isn’t it odd that a company that claims to be “eco-friendly” and be for both animal rights and wildlife conservation would use an ingredient that comes from a fish species that is thought to be endangered in some parts of the world? In addition, it is also odd that the company does not even address where the tuna oil was sourced from, nor whether or not it was “dolphin-safe” to begin with. After all, this is all coming from a company that claims to be against the keeping of animals in human care, but yet, sells products that could be harming the ever-shrinking wild habitats that the likes of dolphins, and elephants rely on for survival.

This concern should be at least investigated because if the tuna oil is being sourced from fisheries that do not use dolphin-safe practices or are from tuna populations that are considered to be endangered, then parents need to know about the products they are buying could be harming the marine ecosystem.

In the end, parents need to know that neither Steven B.Dunn nor his animal rights allies have expertise in animal husbandry and care in zoological facilities. While a company wanting to do its part in reducing its own carbon footprint by creating products that are made of alternatives that are meant to be eco-friendly is a noble act, using this method as a way to promote a harmful agenda is only going to turn a lot of people away from wanting to help wildlife than want to take action. The team at Munchkin needs to understand that without zoological facilities, a number of animal species would have died out a long time ago if conservation efforts through breeding programs and rescue and rehabilitation efforts that such facilities provide for troubled species.

Also, as of the date of this writing, August 13th, 2019, The Whale Sanctuary Project has yet to find a suitable location for the construction of the project even though they still do not have the huge amounts of money that would be needed for construction. So far, only town meetings that have discussed the estimated $20 million project that would only be able to house up to eight orcas have taken place.

USA Aspiring marine mammal trainer who loves all animals and a Rivier University Graduate who holds a Bachelor's degree in psychology. Support my work at https://www.patreon.com/user?u=12153464

See all posts by Jenna Deedy →