by Something Complicated 6 months ago in bird 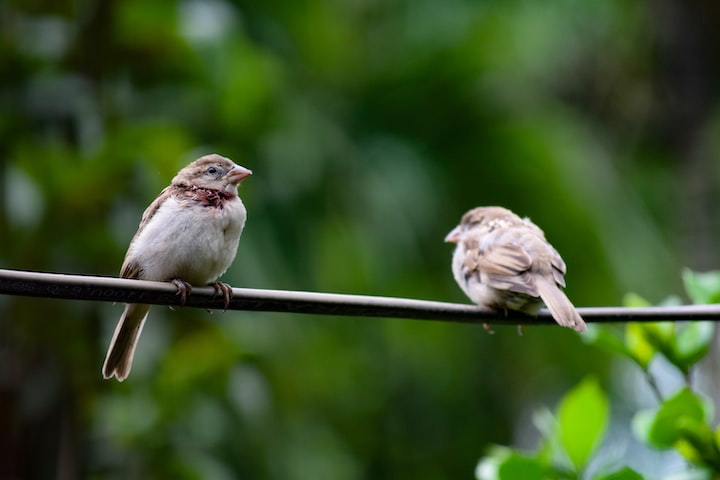 Photo by Dipankar Gogoi on Unsplash

The house sparrow population was discovered by ornithologist Harry Church Oberholser, who decided they where distinct enough to earn subspecies status. David Allen Sibley noted that most sparrows exhibit regional differences; the northern birds tend to be larger than the southern ones, and the southwestern birds have a larger body than their northern counterparts.

The house sparrow is believed to be the only species of sparrow that has been deliberately introduced to America. Although the house sparrow has adapted to almost all urban habitats, the house sparrow is often associated with areas of human activity, parks, gardens and other public spaces. House sparrows seem to prefer to be near human dwellings, however, they are picky about their food.

Shakespeare's reference to the house sparrow in his written works could have been the reason the house sparrow was introduced into America, in the 19th century, various American literary societies endeavoured to bring the birds mentioned in his works to North America.

House sparrows are considered an invasive species in many places, but it has been humans who have deliberately moved these birds to new places and the birds can not be faulted for having adapted, survived and then flourished in the new environment. Adult house sparrows are predominantly grain-eaters, however their babies are more likely to eat insects.

House sparrows can be aggressive when competing for nesting materials and nesting places, although this aggression is only apparent when resources are limited. House sparrows have been seen completely destroying a competitors nest, and then building a new one from scratch in the same location.

The house sparrow is monogamous, but pairs of birds often nest with an additional pair, this appears to be for safety and warmth. Salmonella is widespread in house sparrows, and a comprehensive study of house sparrow diseases found salmonella in 13% of all those tested.

The house sparrow, is described by many bird biologists as a small, brown bird that was the original bird of prey, a winged rat. The house sparrow has been the subject of a great deal of research, in the United States and in other parts of the world.

The Old World sparrow, is often mistaken as other sparrows due to its breeding and feeding habits and behaviour. The Old World Sparrow is distinct enough from other sparrows to warrant its own sub species, however it does require a keen eye to document this sparrow. The Old World Sparrow was introduced to North America at the end of the 19th and beginning of the 20th century, they where brought from the Middle East and North Africa, and nicknamed the sparrow of the old world.

Eurasian Tree Sparrow live differently than the house sparrow, the tree sparrow prefers the edges of forests, and is less associated with human settlement. The breeding habitat of the tree sparrow is typically overgrown with trees, shrubs, grasses and other crooked vegetation such as birch, oak or pine.

Tree sparrows are also common around the world and are also found in Australia, Canada, New Zealand, South Africa. Tree sparrows can live close to house sparrows and if they do occur in the same area, they can reproduce together, but it is not likely.

The eurasian tree sparrow is a bird of the slightly wooded open landscape and widespread in cities in East Asia. It inhabits a wide range of habitats, from forests and shrubs to overgrown grassland.