by Bou Too about a year ago in satire
Report Story 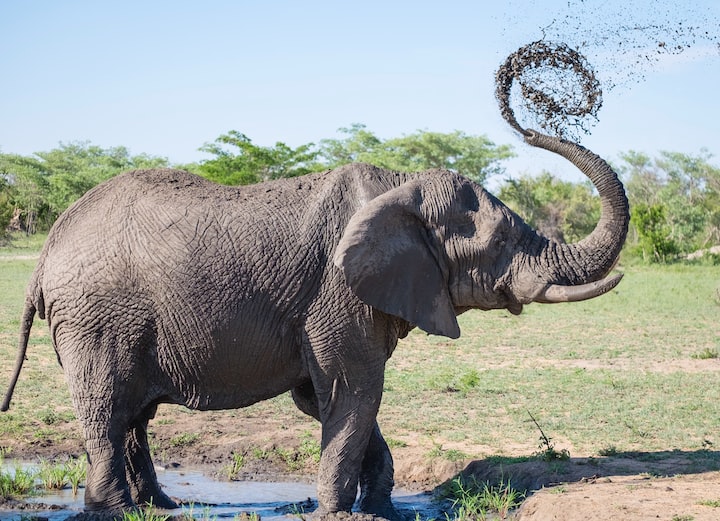 Photo by Andrew Rice on Unsplash

Donald was a kind old soul, hellbent on enjoying his well-earned retirement from the jewellery trade.

He'd been spending a lot of his time of late getting back in touch with his artistic side & taking afternoon tea with his friends in the many & varied teahouses of the English countryside. He loved driving around in his well-cared for vintage cars & afternoon tea was his excuse for getting out of the house.

He was never sure quite how the mix up happened; but happen it did & it took some clearing up, I can tell you!

One evening he was browsing through the pictures for sale on a popular online selling site & saw a beautiful pencil drawing of an elephant up for auction.

Donald proved there & then that there is such a thing as love at first sight & set his heart on obtaining it. Having set himself in that particular frame of mind, he won the auction, paid & eagerly awaited the arrival of his new acquisition all the way from darkest India.

Two weeks later he got the shock of his life when an extremely large bellowing van parked outside his front door!

The drivers' mate asked Donald for access to his pens whilst trying very hard not to look confused; most of his deliveries were to zoos or large country estates. Donald's suburban semi was a first for him.

Donald, in turn, was completely bemused, wondering what was in the van & why it needed to be in a pen.

“I don't have any pens, but the back garden is accessed via the side of the house. Are you sure you have the right address?”

“Mr Donald Campbell, 76 Acacia Avenue. Stourbridge. Looks right to me, unless you're not Mr Campbell?”

“I am Mr Campbell, but I'm not expecting anything that needs a pen. What is it you have in the van?”

“One Indian elephant, female sir.” At which point, said elephant confirmed her status with another stentorian trumpeting that shook the ground.

“I can't take an elephant! I haven't the room! There must be a mistake somewhere. May I see the order please?”

The drivers mate handed over his clipboard for Donald to check & his details were there in black & white along with the logo of the auction site he'd bought the picture from.....the picture. Oh, hells bells! It hadn't been an auction for the picture, it'd been for the real bloody thing!

Donald felt ready to pass out from the shock, but his mischievous side took over & decided it would be rather novel to have his very own heffalump – Donald had enjoyed A. A. Milne very much as a boy & had never lost his sense of fun. He was of the view that it kept him feeling young.

“Right, ummm I'll just open the gate for you. One sec” He handed the clipboard back, still somewhat dazed, yet gaining back his self-control by the second. So much so that he even skipped the last few steps to the gate in excitement.

“Back 'er in Dave. This is the place alright” the mate called to his driver.

The van backed into the, thankfully, wide driveway & drew up to the back gate in that slow, overly careful way large vehicles do. Once it was in position the driver hopped down from his cab to help his mate open the back & let the elephant out of her confinement.

Lallah, or Lallah Rookh, to be proper, was as queenly as her name suggested. She sniffed the air condescendingly before delicately sauntering down the ramp, swishing both her trunk & her tail as she went. The day was sunny, but cool, so she was glad to be out of the van that, to her, was a tiny box.

And that was when things went just about as wrong as they could go. Donald's 2 miniature poodles had come out of the house to see what all the fuss was about & decided to pick the moment Lallah took her first step into the garden as the right time to express their abject terror & indignation by barking loudly at her. The sudden noise caused Lallah, very understandably, to panic. Panicking elephants charge. Lallah suddenly moved forwards at a pace that anyone not familiar with the everyday habits of elephants would find incredulous. She trod on Daves' foot, took out the front left corner of the number 1 garage, ran through the garden bellowing, sat on Donald's prize Jowett car that had been quietly minding its' own business outside the number 2 garage at the back of the garden, got up & aimed for the ornamental pond, eating half the apple tree on the way.

All of this was just a little too much for Donald who sat down where he thought the garden seats were, only to find himself stuck in the water barrel at the same time as Lallah sat on his beloved Jowett. This was all far too much excitement for poor Donald. He threw his hands up in despair & cried, which was not a sight anyone who understands dignity would ever wish to see.

Dave was hopping around bemoaning his broken foot & his mate was stood stock still, looking like he'd been hit by the truck he arrived in. The poodles had disappeared back into the house to grumble to each other & plot later punishments for Daddy Donald & that was when Mrs Dudley of number 83 appeared, demanding to know what on earth was going on, had Donald taken complete leave of his senses or was the dementia finally setting in & “Oh my goo.....”

Lallah didn't like the noisy fat woman & let her know it with a very raspberry like fountain of pond water. Elephants have 75 different ways to express their feelings with waterspouts, don'tcher know.

Donald was now struggling to extricate himself from the rain water barrel, Dave was sat on the van ramp & his mate chose this moment to stick the clipboard under Donald's nose & insist he sign for the delivery, pointing out that the docket said 'No Returns' in bold capital letters.

Donald left his very soggy mark on the docket & wondered just what he was going to do to get himself out of this. He wondered if he could sue the seller for false advertising, damage to property & generally bringing ruination to his contented life.

Then Lallah wrapped her trunk around his waist, pulled him out of the barrel & nuzzled him tenderly. All thoughts of lawsuits & chaos left his befuddled head & he hugged Lallah back as well as his unsteady body would allow.

“Donald Campbell this is the last straw! The very last one, do you hear me?!” Mrs Dudley had finally recovered from her drenching & was back to her usual self in full force, waving her finger in his face with great energy. “Not only will I be reporting you to the Police & invoicing you for my outfit, I will be reporting this entire incident to the Neighbourhood Watch!” She swirled, drenching her surroundings as she spun & stormed off in a very similar fashion to Lallahs' earlier charge.

The local Neighbourhood Watch was chaired by Mrs Snodleigh – Bogstein who was one of those middle-aged women who enjoyed instilling terror in the heart of everyone around her. God help anyone who had even the hint of a weed in their garden, or anything less than the highest standards of housekeeping. She even went so far as to dictate which cars people could drive & which plants they had in their gardens. She surrounded herself with a gaggle of 'ladies' of like mind who stood in for her when she wasn't personally available, which meant that pretty much everyone in Acacia Avenue spent their lives walking on eggshells when it came to their domestic affairs. What few children still lived there didn't play in the street & were incredibly careful to ensure their garden games couldn't be seen or heard by any of 'Old SB's spies'. This meant that there were no wars, or ball games, or playing it, or any of the usual games children play when not at school. The 4 teens called her Mrs Snotty Bitch when nobody could hear them & plotted to leave home at the earliest possible opportunity; much to the chagrin of their long suffering, Prozac crunching parents.

Donald had muttered his habitual platitudes at Mrs Dudley whilst she railed at him, yet he hadn't really heard a word she said as he'd been occupied by snuggling with Lallah & getting pooped on by his very put out Minah birds who wished it known that they didn't appreciate their apple tree being eaten up.

When the moment passed, Donald reluctantly left Lallahs' side, shut the gate & decided that a nice cup of tea would be just the ticket.

More stories from Bou Too and writers in Petlife and other communities.