by Amy Rivers 8 months ago in exotic pets

A young child's experience on the farm 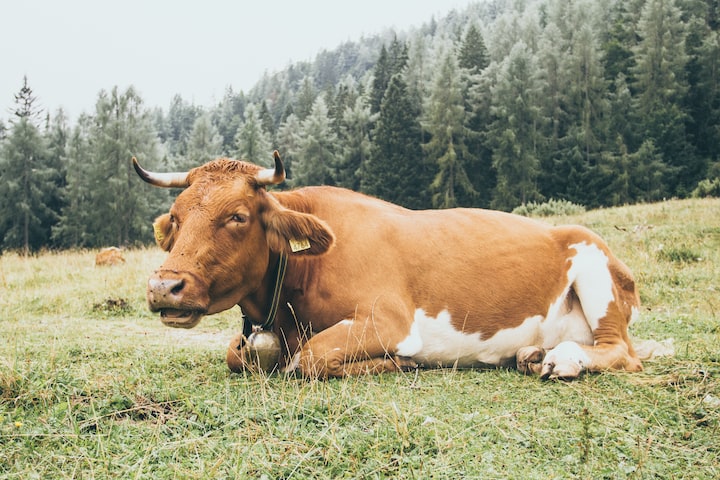 Photo by Christian Möller on Unsplash

I put my arms around Winston’s neck and gave him one last hug. My arms barely circled half of him.

I didn’t want to let go. I know what's going to happen after I do.

“I’m so sorry boy. I failed you.” I whispered as tears ran down my face. I looked into his dark kind eyes and kissed his head.

I could tell he knew something was up, cows are smart. And loyal.

“Excuse me, are you Jimmy Rogers?” An old man dressed in a trench coat and a cowboy hat approached. Great it was the auctioneer… maybe he’s coming to say they made a mistake? Maybe the buyer backed out.

I nodded my head.

He pulled a little black notebook from his bag and opened it. “I see that you’re only 13 years old. That’s impressive… your big boy, Winston, is going to make headlines. The Grand Champion! Can you imagine that!”

“Did you need something?” I know I probably sounded rude, but I didn’t really care what this guy had to say. Did he have a reason for coming to talk to me? I mean, I’m clearly upset.

“Yes, the buyer wants to meet you.” He tore one of the pages out of his book and handed it to me. “This is his information… and son, chin up, it’s the name of the game.”

I shoved the paper into my pocket without even looking at it while staring daggers at his back as he walked away. I bent over to reach for the plastic bag with apples slices. Winston’s favorite. He deserves to be happy before…

Everyone’s excitement was really starting to piss me off. I turned my head to look out the window and refused to say anything. Sure, I had originally gotten Winston as a baby calf with the goal of making some money from him for college, but that was before…

When he was a baby, I would sneak him in the house at night. When he got too big, I would sleep in the barn some nights, just to be with him. I didn’t realize how much cows were like big dogs. They get excited, they love people, and they find a way to make you love them back.

There was a strong ache from deep inside as we drove further and further away from him. I felt like I just left my very large dog behind… to be slaughtered. And for what? So some farmer could sell the beef to supermarkets so families could have hamburgers?

My mom told me the pain would go away with time. Well, it’s been seven hours so far. She was wrong. I scrolled through my phone’s album. This must be what losing a child feels like? I never thought I wanted kids… now I’m sure I don’t. You spend all the time raising them, then they’re just gone.

I suddenly remembered the message from the buyer. I wonder what he wanted? I went over to the laundry pile and dug out the paper.

I dialed the number and wondered what I would say.

“Umm Hi, I’m Jimmy, you bought Winston… I heard you wanted me to call you.” I tried to make my voice sound deeper.

“Oh! Hi Jimmy! I noticed you love your cow. I wanted to let you know, I actually got him because we are filming a movie with a talking duck on a farm. The producer is extremely wealthy and your Winston’s got the look we need. It’s going to take about one to two years, due to the nature of animals being the star. We are filming about 30 minutes from Scranton. I wanted to let you know you could come and see your Winston anytime.”

I sat, frozen for a moment. “You mean… you mean he’s not going to die?”

“Well, I can’t promise what will happen after the filming stops… but for now, he’s in good hands.” I couldn’t believe it. It’s better than I could have ever imagined.

“Thank you Sir! Thank you!”

I woke up and slapped the alarm clock. It was all just a dream… The weight of the previous day came crashing down. When I called the buyer, he wanted to let me know he made a split payment. I stared at the picture of me and Winston on the nightstand.

I'm a an educator, counselor, and amateur writer and artist. I still enjoy reading the Harry Potter series.

Receive stories by Amy Rivers in your feed
Amy Rivers
Read next: Kitty