by Jenna Deedy 11 months ago in feature
Report Story

Breaking down the biggest myth about marine mammal shows and public training sessions that activists refer to as “tricks”. 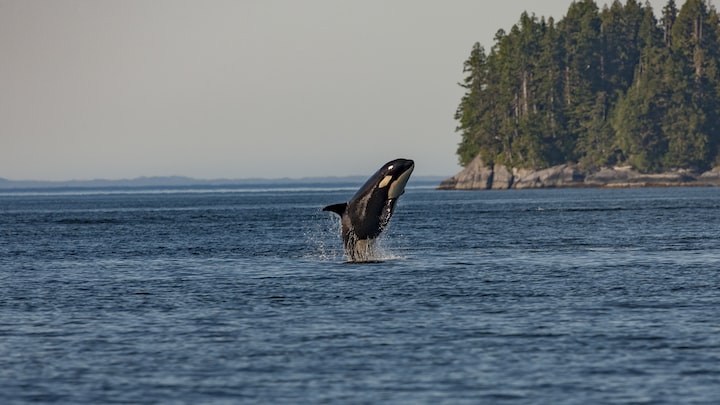 Photo by Thomas Lipke on Unsplash

Probably the one big myth that animal rights extremists like to put out there is the misconception that marine mammals in modern zoological facilities are “forced” to do “unnatural tricks”. In reality, the behaviors you see in a training session or a theater-style show do not differ from any surface behavior they would normally display out in the wild.

As someone who has both worked with marine mammals in human care and has been whale watching off the New England coast, I’ve seen cetaceans “perform” a variety of behaviors in both wild and captive settings, and guess what? Regardless if they’re in nature, or being raised in a pool-based, or even a pen-based facility, the ways the animals display them are no different, and here’s why.

There are two types of surface behaviors that cetaceans, such as orcas and bottlenose dolphins, may often display in both wild and zoological settings-Instantaneous behaviors, and prolonged behaviors (Center for Whale Research).

Instantaneous behaviors refer to any type of behavior that instantly occurs in relatively long bouts. For example, with cetaceans, these behaviors may include aerial scans, spy hopping, back dives, belly flops, breaches, tactile behaviors, and bubble blowing. Prolonged behaviors refer to any behavior that occurs over a long period. Examples of these types of behaviors in cetaceans are chasing, circling, logging, feeding, and traveling. Both behavioral types occur in both wild and zoological settings.

Surface Behaviors in Human Care (Plus, Why They’re Trained)

When activists discuss behaviors in zoological settings, they often refer to them as “tricks”, rather than behaviors, but the behaviors seen in shows are not tricks at all. Tricks imply illusions, or things that are not real but are intended to either puzzle or amuse people. Behaviors can be anything taught to a cetacean by either their trainers or by other animals in their habitat (Dolphin Research Center).

Cetaceans, such as dolphins, for example, are natural-born athletes and are also highly intelligent. Regardless if they are in the wild, or in human care, their accomplishments are real. However, when they’re being raised in a zoological setting, trainers might teach the animals to perform certain behaviors on cue, which they request by giving them either hand or verbal signals. The purpose behind training cetaceans in human care, just like with any animal, is:

Physical Stimulation: Since cetaceans, especially toothed whales, are powerful animals, they can perform physical feats. Many behaviors you see at a modern facility like SeaWorld, Dolphin Research Center, and Georgia Aquarium are all-natural behaviors that cetaceans do are natural behaviors for them out in the wild. However, the only difference is that wild cetaceans, like orcas and belugas, spend a lot of time and energy swimming and searching for prey. Some species have to swim fast to avoid predators, like large predatory sharks and transient orcas (Dolphin Research Center). Once their stomachs are full and they are safe from predatory harm, the animals can now have time to frolic and play.

Meanwhile, in a modern facility, while some animals may chase fish and other animals around, they do not need to work hard at catching them because they know they’ll always get their food from their trainers, regardless of what behaviors they display throughout the day (Dolphin Research Center). Yet, they still need exercise through a combination of training and enrichment sessions that only enable them to display their natural behaviors, but also keep them healthy throughout the day.

Mental Stimulation: Because cetaceans exhibit high levels of cognitive functioning, they need to be challenged. Since they are known for their eagerness and ability to learn new things, the mental simulation aspect of training helps make aquarium life for cetaceans fun, interesting, and exciting (Dolphin Research Center).

Medical, or husbandry applications: Because sick cetaceans mask their symptoms until things take a turn for the worse, making assess through how they act and eat is not a reliable method of animal care (Dolphin Research Center). As a result, routine checkups help both trainers and veterinarians alike determine if their animals are healthy and how to prevent any medical issue that might affect their well-being.

At modern marine mammal facilities, cetaceans will voluntarily take part in medical procedures once they are taught how to take part in them. They can comprise blood, urine, fecal, stomach, and blowhole samples that are collected from the animals before they’re analyzed in a lab (Dolphin Research Center). For example, a blood sample is got by asking an animal to present its tail fluke to a trainer while the sample is taken from a large vessel that is found in the fluke. Medical samples can tell what’s going on with an animal’s health.

The fish and squid that are fed to the animals can also tell trainers about nutrient depletion during the freezing process. To ensure the animals are getting their proper nutrients, vitamins are used to supplement their diet. Many of the animals have learned to swallow their vitamins directly.

Research and Education: While the modern practice of keeping and raising marine mammals in human care has only been around since the 1960s, people have just understood the needs and capabilities of cetaceans such as killer whales, belugas, and bottlenose dolphins. They have also just begun learning about other species of cetaceans and other marine mammal species that we all share the Earth with (Dolphin Research Center).

While people can learn about marine mammals from just observing them, training them has allowed them to learn more about their mental and physical functioning (Dolphin Research Center). Since there’s no technology that can enable people to have a conversation with an animal in a human language, an established system of communication composed of objects, symbols, hand signals, and sounds is used to help dolphins understand and interpret cues.

What about cetaceans in the wild?

In nature, cetaceans learn a variety of skills both, underwater, and on the surface from other animals. For example, orcas off the coast of Argentina have developed the ability to catch seals by stranding themselves onto beaches where the mammals are slow and defenseless (Springtide, 2016). Orcas must learn how to push themselves back into the water in order to swim away, but it takes years to learn this unique hunting technique and they also have to avoid accidental stranding.

Orca calves do not practice on their own until they’re at least five years of age (Springtide, 2016). However, before they can start intentional stranding, they are often accompanied by their mothers, older siblings, grandmothers, adult cousins, aunts, and uncles. These adult family members always stay behind beaches and the calves so that if they get stranded, then they come in to push them back into the ocean. Sometimes, calves may practice alongside the adults if they’re no seals on the beach (Springtide, 2016).

In New Zealand, orcas feed on stingrays that can take them down (Springtide, 2016). Orcas in this area are believed to be the only known wild orca population to have developed the ability to hunt them with a combination of both skill and dexterity.

Orcas will approach the ray by swimming upside down, grab them by either the tip of their tail or by their nose before forcing the ray onto their back, entering a state of tonic immobility. In this state, animals take on a death-like appearance in response to threats (Springtide, 2016). Orcas will then, either throw the ray into the air in order to knock them out or pass them to other animals who can give them fatal bites. These hunting skills are passed down to their calves, who will often play with dead stingrays before eating them. That’s how they practice grabbing and holding them during hunts (Springtide, 2016).

The Indo-Pacific bottlenose dolphins of Shark Bay, Australia, catch their prey with the use of marine sponges as foraging tools (Cell Press, 2020). The sponges help the animals search for food among sharp rocks and venomous corals without risking injuries. The sponges help protect the animals’ beaks as they dislodge fish from their hideouts (Springtide, 2016). While females appear to act as “instructors” by teaching the skill to their daughters and granddaughters, recent studies show that these dolphins might learn it from their peers too (Cell Press, 2020).

Humpback whales engage in “bubble netting,” in which the animals swim below a school of fish before blowing clouds of bubbles that cluster them into a tight ball (Springtide, 2016). From there, the whales will swim right through the ball with their mouths open, gulping the fish into their mouths. Off the New England Coast, humpback whales perform a more changed version of this behavior. Before blowing bubbles, the animals will slap the water with their massive tail flukes.

Off the coast of the Southeastern United States, Atlantic bottlenose dolphins have been observed performing wave pressure and strand feeding (Springtide, 2016). These methods involve an entire dolphin pod cruising around until they find a school of fish. Then, the dolphins will circle the fish into tight circles that trap and compress them into a massive ball. They will drive this ball towards a beach or mudflat before the pod positions itself in a tight line that faces the ball (Springtide, 2016). The pod will surge forward, which then creates a powerful bow wave that pushes the fish up the shore, enabling the dolphins to come out of the water, onto the shore, and eat as much fish as they can.

Around the world, especially in Brazil, there are several reports of wild dolphins helping fishers with their catches. The dolphins drive schools of fish towards a line of fishers and will signal them with head or tail slaps when and where the fishers should throw their nets (Springtide, 2016). Any fish that escapes ends up in the mouths of the dolphins. This cooperative fishing method goes back to the late 19th century and has been passed down by multiple generations on both sides (Springtide, 2016).

What both wild and aquarium resident cetaceans have in common is the ability to learn and create new behaviors. These behaviors can be learned from people or from other animals. The purpose of these behaviors enable animals to hunt, to communicate, to interact with other animals, and the world around them. To insist that these surface behaviors are “unnatural” in a zoological setting when it’s not the case is invalid and shows how little some people know about cetacean behavior.