by Stephanie Hoogstad about a month ago in workflow
Report Story 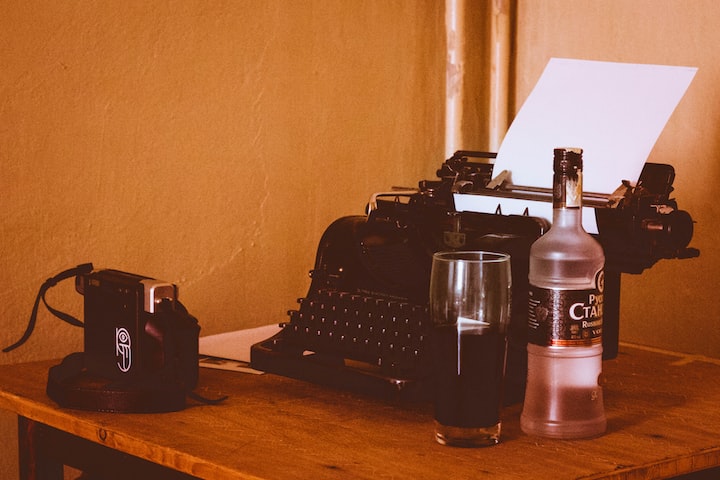 Photo by Zuzana Šubrtová on Unsplash

About a month ago, I read an article on here by Following the Flow called "Why 'Write Drunk: Edit Sober' is Terrible Advice". The author discusses their own experience with trying this advice with disastrous results. In addition to being entertained, I was reminded of a post that I wrote for my blog, The Writer's Scrap Bin, over five years ago on the same writing advice. Unlike most people, I do not interpret that advice literally.

There’s no secret or debate behind Hemingway’s status as a heavy-weight drinker. A champion, really. But are we to take his advice literally? Should we get drunk–or just drink–to write and wait until we sober up to edit?

If that’s how you choose to take it, you’ll find that people are somewhat divided on the accuracy of the quote, as proven by Following the Flow's article. The common thread among most of the analysis is that drinking may help relinquish inhibitions to a point, which can help writers to not censor themselves and be more creative. However, there is a time when drunk is too drunk and your writing will turn out like horse manure. I think the most intriguing take on this angle comes from this study, if you wish to look into it further.

My take on Hemingway’s advice is quite different. For personal but non-religious reasons, I don’t drink. It’s not entirely out of the realm of possibility, but I don’t see myself drinking in the near future. What, then, do I get from Hemingway’s advice?

Let’s look at the first half, “write drunk.” As I stated before, the benefits of writing drunk seem to be a lack of inhibition and enhanced creativity. In that case, I equate “write drunk” to “write semiconscious” or, from my own experience, “write half-asleep.”

I don’t have any studies or scientific evidence to support this interpretation. I can’t even speak for other writers. Nevertheless, my writing seems to come most freely when I’m not entirely conscious. I have discovered that my writing is most productive when I first wake up (even if I sleep in) and around 10:00-11:30 p.m., not long before I go to bed.

I’m normally too tired to read or focus on much of anything at these times, but I can write with minimal distractions. Some people might argue that there’s not much going on that can take away my attention and that’s why I’m more productive. They may be right. Still, I don’t have as consistent of luck when I just isolate myself from all external stimuli. I also have to admit that there are noises echoing throughout my neighborhood at any time of day, which detracts from this theory. (By “noises,” I mean a motorcycle speeding by the house at 1:00 a.m., someone’s dying car starting up around 2:00 a.m., and dogs and birds sounding off at all hours.)

One of my biggest problems with writing is my inhibition stunting my creativity. I have voices in my head that cause me to doubt myself and my work constantly. The more awake I am, the louder those voices become. My sleepy state silences these inhibitions enough that I can get about a solid hour of writing in before I start wondering if it’s utter garbage. In that way, “semiconscious/half-asleep writing” is my form of “drunk writing” without as strong a possibility of memory loss.

The second half of the quote is rather self-explanatory when examined from this perspective. If “write drunk” is “write semiconscious,” “edit sober” must be “edit conscious.” Of course, it’s probably best to be sober when you edit as well. You’ll have your full faculties at your disposal. You’ll also look at your work with a more objective eye. You won’t have to (entirely) shut up your inner critic at this point, and it will finally have its say. You’ll remember the rules of grammar–or be able to research anything you’ve forgotten–well enough to know when you should and should not break them. The more sober and conscious you are, the better you will edit without totally destroying your work.

Hemingway was a great writer but relied too heavily on alcohol. Let’s face it; he was an alcoholic. It doesn’t take away from his work, but he may more have written well despite being drunk rather than because of it.

We don’t all have to get drunk in order to write well. Any writers who do drink shouldn’t get too drunk if they plan on writing. People end up regretting drunk texting. Can you imagine drunk writing? Instead, find under which conditions your inhibitions are lowered. Is it when you’re a little tipsy? Tired? Comfortable? So stressed and crunched for time that you simply can’t stop and give heed to your inner critic? Once you figure that out, use it. You may be surprised at how much your productivity and the quality of your writing increases. Just remember to listen to constructive feedback once you start editing.

This article is a modified version of the post by the same title on my blog, The Writer's Scrap Bin. To see the original version, follow this link.

With a BA in English and MSc in Creative Writing, writing is my life. I have edited and beta read as a freelancer for a few years with some published stories and poems of my own. You can learn more about me at thewritersscrapbin.com.

More stories from Stephanie Hoogstad and writers in Journal and other communities.