Why Does 'Sex Sell,' and Should It?

by George Gott 3 years ago in industry / pop culture / business

The topic of sex in advertising provides readers with a life they want to envision – or at least, that's what the advertisers think.

It’s no shock that corporate, advertising culture and sex go hand in hand. As the old adage goes, “sex sells,” and it has been doing so for centuries. The Mad Men-esque sex appeal in advertising has been around since the beginning of the field. From billboards to woodcuts, illustrations, posters, signs, and television ads, sex has ingrained itself into our culture. At the beginning, it was typically portrayed in ads for saloons and tobacco, with attractive women naked from the waist up.

The earliest form of sex in advertising was used by The Pearl Tobacco brand in 1871, which featured a naked woman on the package cover. It is estimated that about ¾ of advertisements that use sex to sell products suggest that the consumer can gain something from buying the product. However, there are various other messages sent to consumers when sex is used as a selling point. Our questions for you is: should sex be used to sell?

Attitudes Towards Sex in Advertising 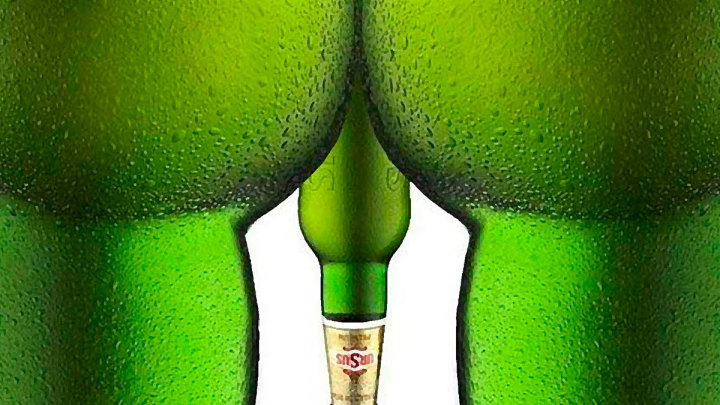 Certain values and attitudes towards sex are often suggested with a product. For companies like Calvin Klein, the message could be “innocent is sexy,” when models in sexually-leading poses are used to sell a product.

Through their various commercials over the years, Budweiser often suggests that having one of their beers will make you more attractive to women. For Versace, pain and violence are often linked to sexuality and glamour. Other messages include that women enjoy being dominated, that using a product will make you more attractive to the opposite sex, and that using a product is naughty but legal.

The use of sex in advertisements has been criticized by the masses because, for the most part, it portrays and perpetuates an array of gender stereotypes. Men are shown as sexually aggressive and women are shown as dependent and less powerful, or as submissives who crave only to satisfy their dominating man.

Since the late 1970s, many researchers have determined that advertisements depict women as having less social power than men, although the manner in which they have less social power has changed over time. In the past decades, women in advertisements have often been negatively portrayed as sexual objects or objects of men’s desires, which is why many fashion companies have been getting in trouble.Is it possible that through advertising, our own societal views have been swayed?

Selling Sex in the Fashion Industry

Dolce and Gabbana is no stranger to controversy, but it came back to bite the company in early 2015. After they stirred the pot by calling IVF children “synthetic,” fashion publicist and judge on America’s Next Top Model, Kelly Cutrone dug up an old photoshoot from 2007 that had been banned in Italy. The photo depicted a swimsuit model being held down on the floor by a shirtless man while three other men stand around watching them, looking like a gang bang.

Cutrone tweeted, “I guess simulating gang bangs are fine—but IVF and same sex marriage are not—life according to @dolcegabbana.” The photo had been banned by the Advertising Self-Discipline Institute (IAP) because it “offended the dignity of the woman, in the sense that the feminine figure is shown in a degrading manner” as well as “the passive and helpless position of the woman relative to the men around her, and the representation of abuse or the idea of violence towards her.”

Unfortunately, Dolce and Gabbana is not the only fashion company to come under fire for sexually explicit and suggestive advertisements. American Apparel has had many of their ads banned all over the world, and they have been accused multiple times of sexualizing models who look underage. One ad featuring a twenty-year-old model wearing a thong bodysuit was banned in the UK by the Advertising Standards Authority (ASA) in March of 2015 because she looked underage. ASA also banned another ad for back to school clothing which depicted women wearing school skirts bent over and exposing their underwear. Again, ASA believed the images were promoting “Lolita-esque” themes in their advertisements.

Traditionally, companies who tend to focus on more innocently portrayed sexuality in their ads, not only avoid this type of conflict but also see more success in their ads. Sexuality and fashion go hand in hand, and the female body should be celebrated instead of negatively portrayed in advertisements. Along with many other aspects, owning your sexuality makes a woman strong and powerful.The tides are turning, and more progressive advertisements are surfacing. Sex may sell – for now, that is.

industrypop culturebusiness
George Gott
Read next: Why Denny's Is the Perfect Starter Job for a Cook
George Gott