The story of Copernicus

by AliceParson 2 months ago in history
Report Story

Copernicus, a famous Polish astronomer of the Renaissance, was the founder of the heliocentric theory 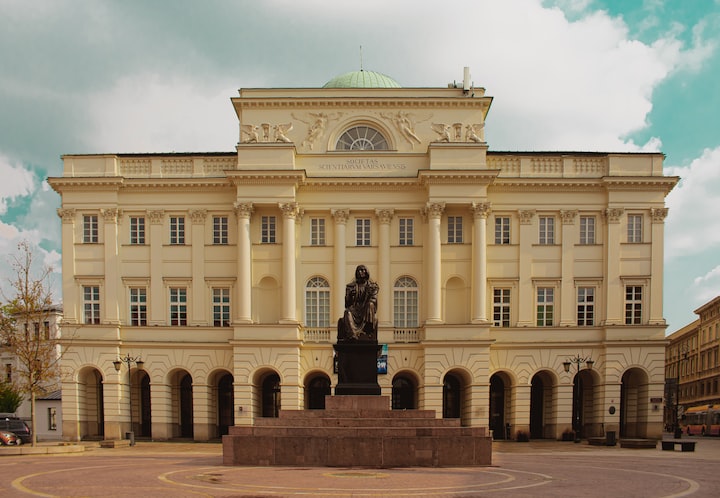 Photo by Bianca Fazacas on Unsplash

Copernicus was born in 1473 to a merchant family in the Polish city of Toruń. Due to the early death of his parents, he was raised by his uncle, who was a clergyman.

At the age of 18, he came to Krakow, then the capital of Poland, to study at the University of Krakow. Influenced by the Italian Renaissance, Copernicus embraced the ideas of humanism and became interested in astronomy and mathematics, and began to observe the heavens with astronomical instruments. After Copernicus graduated from university and returned home, his uncle sent him to Italy to study church law for Copernicus to follow in his footsteps and serve in the Catholic Church.

In Italy, Copernicus made friends with a group of astronomers, who often exchanged their knowledge of the structure of celestial bodies. Together with his observational studies, Copernicus began to doubt the "geocentric theory" that had been prevalent in Europe for a thousand years. The "geocentric theory" was proposed by the ancient Greek philosopher Aristotle, and further systematized by the Roman astronomer Ptolemy in the 2nd century AD. The geocentric theory holds that the earth is stationary at the center of the finite universe and that the sun, moon, and stars revolve around it.

With the help of this theory, the Church said that God created the earth and placed it at the center of the universe and that the sun, moon, and stars were ornaments created by God to adorn the universe. In 1506 Copernicus returned to his homeland and became a canon in the cathedral of Frohnberg.

From then on, he was given some material security and plenty of time to pursue his passion for scientific research. To facilitate his research, Copernicus deliberately chose the arbor on the church wall as a dormitory and studio, set up a small observatory inside, using rudimentary homemade instruments, and began a 30-year-long astronomical observation.

It was here that he wrote his world-shattering masterpiece, "The Theory of the Movement of the Heavenly Bodies", in which 25 of the 27 selected observations were made from this tower. The Treatise on the Movement of the Heavenly Bodies consists of six volumes. In the book, Copernicus boldly proposed that "the sun is the center of the universe, and all the planets orbit around it; the earth is not the center of the universe, but an ordinary planet orbiting the sun." "The sun, as one sees it every day, runs from east to west, because the earth rotates one week every day and night, and not because the sun is moving." "The constant movement of the stars in the sky is because the earth itself is rotating, not because the stars are rotating around the stationary earth." "The planets Mars, Jupiter, and others move in the sky sometimes prograde and sometimes retrograde because they each revolve around the sun in their orbits, not because they travel in mysterious ways." "The moon is a satellite of the earth, and revolves around the earth one week a month."

Copernicus also criticized in this book the Ptolemaic theory that the earth is stationary. It was pointed out that when the earth is in motion, people only so feel that the whole universe is rotating, as if a person in a row boat, does not feel that the boat is moving but feels that the land and the city are backward. The earth does not move is a false image, the earth rotates around the sun is real. Copernicus knew that his "heliocentric theory" would deal a heavy blow to the feudal church and would expose the absurdity of the claim that God created the world. So he hesitated for a long time, and only when he was 69 years old did he agree to publish his Treatise on the Movement of the Heavenly Bodies.

One day in May 1543, when he received the book, he had been paralyzed in bed for more than a year, and he only touched the cover of the book and closed his eyes with relief. Copernicus' "heliocentric theory" fundamentally changed the old view of the universe, debunked the lies falsified by religious theology, and was of epoch-making significance in the history of scientific development.

More stories from AliceParson and writers in Journal and other communities.