Only Introverted, Not an Imposter

by Maervel about a month ago in industry / career
Report Story

Large spaces, awkward girls and speaking too slow while saying too much: Overcoming the imposter mindset. 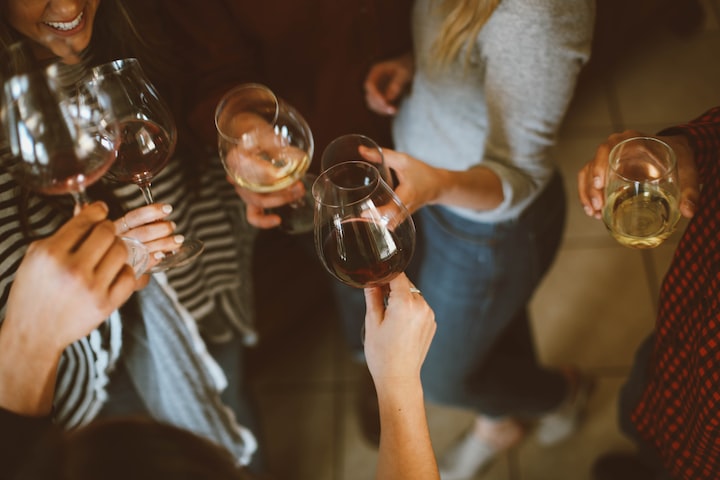 Photo by Kelsey Chance on Unsplash

Scan the room and you will very likely see me, vigorously nodding in agreement to the guy in the horn-rimmed spectacles speaking about the stock market and the effect this whole bloody viral epidemic is having on his shares, or looking with interest at the blond with the pony tail and social competence of a bumblebee, or right there staring at my phone for the seventeenth time. Still none of those beats me fiddling with the rim of the empty glass I’ve been holding for the past hour.

Where am I, you ask? Well, in a quaint upper floor hosting space at a members-only club in the middle of the city on a Friday evening in early Spring, where a fancy dinner is being held. The dimly lit Victorian room is a vision of minimalistic dark teal walls with elegant wall-mounted corner lamps throwing the desired shadows on the rest of the room. The large rectangular oak dining table in the middle of the room is flanked on both sides by perfectly aligned rows of plush seats and is itself set to perfection. An inviting couch to the left gives it an extra cozy royal living room vibe. The open bar close to the entrance where I, as well as most of the other guests are gathered makes quite a statement of its own. I have never been here before. I have, in the past, gone many times past the building itself, heard its name mentioned among the rich and famous and those privileged to roll with them, and while I have had no particular dreams of being in this very space, here I am today, where the big guns roll.

Two days ago, I had opened the invitation that would bring me here today. The email said it was an invite-only event and gave no further details beyond the fancy location and the time. To say that I felt honored is an understatement, honored, but also shocked! No quicker had I punched the air in excitement than I drew myself back down to earth as it occurred to me that this was a going to be a networking event. I don’t have anything against networking events and have gone to quite a few in my time in this city, however as an introvert, I find that while I do actually like to have deep meaningful conversions, networking events are rarely the place for them and I very quickly run out of the social steam needed keep up with these settings. I have managed to survive most of these mixers however usually by knowing at least one other person at the event who I latch on to when the discomfort with small talk makes it hard for me to carry on interacting with other attendants. At today’s event however, I barely know anyone and this here, is no ordinary networking event. The small cohort of guests showcases a fine selection of business leaders, movers, shakers, the politically connected, brains behind major products, investors and a sprinkle here and there of heirs and heiresses to empires, people who’s monthly salaries could very easily purchase my flat and of course me, my academic qualification my main calling card for being here.

A short welcome speech by the hostess who is herself the owner of a chain of research labs in the country, one of which I work at, sets the rest of the night in motion. The purpose of bringing us all together is for us to get to know other players on the field which we play, to connect and to share ideas. The increase in my heart rate and the sweat I feel creeping up at my temples annoys me but in an utterly ridiculous manner which makes me want to laugh out loud. Somehow, somewhere deep in my subconscious, a voice which I have heard too many times before is trying to remind me that I am better off picking up my coat and heading home, that this is too big a space for me and there is no way I will find any common ground with the caliber of people seated around this dinner table. That beyond the common ‘playing field’ which the heiress had alluded to earlier, they will find me pretty boring, weird or not smart enough pretty quick and will prefer to speak to other people instead.

This voice and these words are no strangers to me, I have heard them over and over again. I heard them when I got accepted into my bachelors program, a highly competitive one where only the best brains in the top schools often scored a place. I heard them in every class where I scrunched a little lower while others scrambled to make their voices heard and their names recognized. I heard them when I started interning after graduating and of course when I made it to the even more highly contested Master’s program. What is interesting about these voices is that they are not always wrong. I am not the smartest in the room, I don’t actually have the greatest ideas and the most interesting stories to tell and frankly sliced toast has more credentials than I could ever dream of. However, the actions I choose to take based on the constant reminders of what I am not, are more important and more of a determining factor than what the voices say.

I do feel like an imposter, I do feel like I don’t belong in this space and that I have nothing particularly of worth to give that hasn’t already been given. I am cautious of my words and worried about saying something that may come across as not intelligent enough, I have rambled through a few answers and tried to keep them as short as possible. Yet, if I allow these voices and feelings to win, I’ll leave here with the only memory of me being the number of times I looked down at my phone or wrung my hands and stared into my lap when there was a lull in a conversation the other person started or when someone else drew the attention of the person I had struck a good conversation with.

So instead, I read the room, I watch, I learn. I watch the investor who just made a large gamble talk about the factors that scared him and the thoughts that pushed him to still go ahead. I watch, how the founder of two impressive startups introduces himself to this and to that person. I learn, from the posture of the lady across from me in the purple jumpsuit whose quietness and pauses in between conversations seem rehearsed and yet graceful and admirable all at once. I listen, as the founder to my left speaks to me about the new product he believes will make the world a better place and how his childhood visits to his grandparents have played a grand role in his creating this product. I have often heard about faking it until you make it, but I ask myself what I can fake without looking exactly as intended, a fake. I choose to NOT fake it, but to BE, to be what I am. The intelligent, yet uncomfortable-because-I-am-new-to-this-space girl that I actually am, the thinking-much-and-yet-saying-few-carefully-measured-words girl that I have been to this point.

I say ‘to this point’ because today something new albeit a tad familiar has happened. The creeping sense of being in a space too big for me and being around people too high for me has happened. I have arrived at and stepped across the line where the voices get to tell me that I don’t belong, I have come close to peeing my pants and wringing the skin right off my hands and believe it or not, I had not combusted. I had looked uncomfortable questions in the eyes, cowered and then nodded in acceptance of their power. But all that was to this point, today. Tomorrow, beyond this point, if I ever am drawn into such a space, I will be the one looking squarely in the face of the questions, with a wink to boot.

The feeling of being an imposter had only pointed me to the fact that I had indeed stepped into something new, bigger and one that needed adjusting to. Always being bigger than the room could be a sign that I have been too long there, an achievement which isn’t terrible in itself but may present a false sense of confidence where everything else seems achievable until actually attempted. So today I face the scary sea of an introvert out of her comfort zone with a double helping of imposter syndrome, but tomorrow, I’ll ride these same waves with the masterly craftmanship of a weathered sailor, because today happened.

I grab my coat as the last few guests prepare to leave. The food had been amazing, who knew that vegan meals could do that! The assistant hands me my gift as I step out, it’s a book, the night couldn’t have ended better. As I crawl into bed with my book, I file this moment too in my ‘win’ cabinet. I’ll be back!

Long before Medicine sought my heart and time, words stood by me and held me in a sweet warm embrace. And here again, they remind me that we are far from done on this journey.

More stories from Maervel and writers in Journal and other communities.