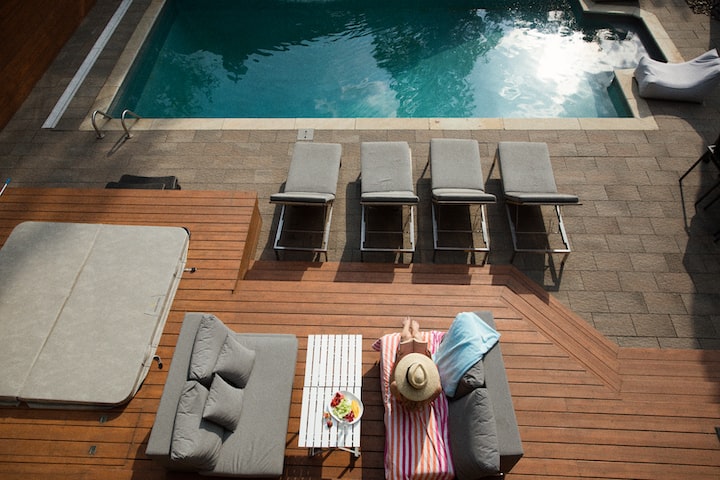 I went into Vocal's Summer Fiction Series challenge telling myself that I'd have a unique story for every prompt.

Aaah, the lies we tell ourselves.

Like many others, I found myself falling victim to fiction fatigue, but I still managed to pen five unique tales that wouldn't have existed otherwise.

I wrote about a young girl who believed topiary were a breed of animal; a bad date where a woman prefers the glass of wine over the man sitting across from her; a mailman who brings lost letters home, sparking an insatiable curiosity in his wife; a love story between two women who work at a radium-paint factory, and a tale of a young man who becomes enraptured when peering into the surface of a snow-globe.

I think I found my voice in fiction, and I did in part by the stories I was lucky to read. I was served a lesson in place and imagery when I read Rose Esposito's winning entry 'Seed' in the Brown Paper Box challenge. Validated and invigorated to explore truth in my work when I read M.C. Finch's second place story in the Death By Chocolate challenge, and completely enthralled when I finally saw a fantasy story win out with Meg Anderson's 'Glimmer' for the Long Thaw prompt.

The Old Barn challenge on it's own saw 1,800 entries. So, to say that many deserving stories were overlooked during the Summer Fiction Series would be an understatement. It would simply be an impossible feat for Vocal to reward every deserving writer for their tales. So, when the dust has settled and Sunny and Sammy have closed their eyes on another long night of reading, the mantle is passed to us - dear writers - to bring new life to the discarded gems who's value resounded and lingered in our psyche well past the closing lines. I present to you - a very restrained and by no means definitive list - of ten personal favourites from the Summer Fiction Series.

A historical fiction following the childhood and early adolescence of a young Egyptian boy who suffers the same ailment as Prince Tutankhamun.

Written as a letter to the protagonists Mother, the story details a brief and whimsical childhood dampened by class differences and circumstance. The letter reads with a hushed sense of urgency, and is an interesting take on the enchanting but dark period of ancient Egypt.

"As a child, I always thought my friend's canes were stronger and golden because that's the colour he liked. After all, you always asked me the colour I liked and always made a cane for me in those colours."

Entered into: The Old Barn Challenge

To Light a Lantern by Lilia

Another historical fiction, but based in China. We follow the plight of a lantern maker's beautiful daughter, who has caught the eye of the ruthless Emperor of Han.

The story begins like a fable watched from a bird's eye - and continues from our narrators perspective. The story travels like a slowly building wave, which only truly breaks once you've finished, then re-read the opening sequence a second time.

"He may have had ten thousand eyes and ears, but alas, only one mind."

A gentle love story about a woman and a military man. Due to the 'unconventional' nature of their love - which is hinted upon but never overtly discussed - the couple is shamed by their peers.

What at first appears to be a somewhat casual tale turns into a heart aching fable about two people's yearning for the unreachable.

"I had my own quirks and differences, but he was man enough to see past them, and not only in a tolerable manner, but he could see who I truly was inside, and through prying my outer shell open as if it were a Pistachio, I was able to see him for who he was as well"

The Garden Outside of the Church by Jennifer Baker

A harrowing tale about a young girl trapped in the basement of a church. She gazes outside the window every day, and pictures herself as a marigold in the garden.

Perhaps the most relevant of all the Marigold entries I read. It didn't feel as if the author had simply added the flower so as to fulfil the criteria for the prompt - It felt more as if the story had always been there, just waiting for the right hand to pen it.

"I can hear the rain now. I am going to close my eyes and pretend to be one of the Marigolds in the garden so I can see the storm roll in."

Entered into: The Golden Summer Challenge

Not one to usually enjoy dark humour, I was completely taken aback by how much I loved this story, and for how long it stayed with me.

The characterisation and shards of black-comedy still linger in my mind. We follow a day in the life of the indignant Marilyn as she grapples with her irritability brought on by a particularly warm summers day, and the consequences that follow her unabating bad attitude.

"Was that woman walking a chihuahua? Did she not know that dogs should not be out in this heat? That little beast was going to sweat and then stink. Weren't chihuahuas more rat than dog anyway?"

Entered into: The Golden Summer Challenge

Ariadne and the Minotaur: Psychopathy Runs in Families, by Call Me Les

I have a personal bias for feminist retellings, but Lesley does them particularly well. She has the unique capacity to create an entire novel in less than 2,000 words, filling them with heart and action.

Tales of old - specifically, Greek mythology - seem to be Hellbent on getting women wrong, so it's a breath of fresh air to see an alterative perspective on the story of Pasiphae, Ariadne, and the origin of the Minotaur.

"I started by seducing Theseus. It wasn't hard. Or rather it was, but he was unable to make use of the appendage before passing out from the tincture I'd slipped into his wine."

Entered into: The Raging Bull Challenge

An eerie and whimsical tale about an old man who wakes to find his deceased wife watching him from his bedroom doorway.

It is stories like this that make me wish I could see more magical realism represented in the winning entries, but I digress. The beauty of stories such as Moonglow is in their portrayal of magic; mysticism is as simple and as expected as the ordinary acts, such as shopping for carton of milk.

"Her ribs become the curved frame; her knucklebones the screws to tighten the harp strings of long, silver hair."

Entered into: The Green Light Challenge

This story reads like every writers dream; an enchanting answer to why we might feel displaced, and why the horrors and hurt that pepper our lives might be too much to bear witness to.

Sarah manages to expertly weave many of the Summer Fiction Series prompts into one story, without making it seem forced. I particularly enjoy this story for it's Green Light and Long Thaw aspects.

Delighted, she giggled and tested the limits of her effervescence, she felt like a forest brook meandering through the auroral rivers in the starry night skies. He flew beside her, smiling, encouraging, as she explored with zeal, this new found magic.

Entered into: The Long Thaw Challenge

It's one of those stories that leaves you guessing and not only wanting, but needing more. It appears - at first - to be a slice of life tragedy about a young boy who suffers a brain injury.

We follow his perspective - through what seems to be a stream of consciousness or a dairy entry - as he tries to make sense of the complex reasoning behind his mother's actions. But, between the 'pages' of an ordinary story arises many questions and lingering mysteries.

Now, I am like the fish in winter. She told me they are slow and sleepy and stay down in the darkness, keeping real still in the deepest parts of the pond. She said they are still the same fish, just changed by circumstance.

Entered into: The Long Thaw Challenge

Two of a Kind equals a Pear by Jason Basaraba

This quaint tale from Jason packs a punch like no other. It begins with the racing thoughts of our protagonist, who is pondering the consequences of having committed a felony.

I don't know if I would classify this as literary fiction, comedy, tragedy, or all of the above. It's an expertly crafted story that is both hilarious, and heartfelt. I found myself gasping and laughing throughout the story, which is not something you'd expect from a story beginning with a crime.

He rolls the window down and sticks his head out. The wispy hairs upon his head flow and dance in the wind. Stretching an arm out, he surfs the wind. He turns and smiles at me. “I’m flying.”

Entered into: The Pear Tree Challenge

Of course - you can see that I have a bias towards fantastical or comedic stories, and my honourable mentions (aside from the last) follow the same themes.

One of the other stories that captured my heart was what seemed to be a retelling of Anastacia, titled The Magic Garden, by Melissa Ingoldsby. You explore not one, but two stories, as the protagonist recites a tale about a magic garden and a pear tree to her siblings, eager to finish the story as guards storm the palace.

Another favourite was a fairytale titled The Rather Foul-Smelling Fairy by Jennifer Christiansen. We follow the story of Grogoch; a funny looking fairy who befriends a boy and weasels himself into the family home. It's a quirky story that incorporates the Old Barn prompt in a completely unexpected way, and includes pictures that help to set the scene.

My third honourable mention goes to a story that I can not - for the life of me - track down. It follows the perspective of an entitled young woman who comes home to a messy apartment and a tired husband. Noting that her husband has attempted to mask the smell of their stuffy house instead of doing a thorough clean, she descends into a fit of rage with terrible consequences. If this story sounds familiar to anyone, please let me know!

My Favourite to Write

I used to find writing fiction a drag; I enjoyed it, but it was immeasurably difficult. The Summer Fiction Series gave me the skills to write quickly, concisely, and imaginatively. I have written some of my favourite pieces as a result, one of which being my entry into the Old Barn challenge.

It's interesting, how certain ideas come to our minds, and I would love to know how the writers I mentioned where inspired to write their stories. My favourite of my own pieces, Topiary and the Great Perhaps, was written as a result of a single phrase that popped into my mind during a half-sleep state; "are the topiary in the barn?"... The sentence made no sense at first, but it eventually conjured the character of Clair - a young girl who believed topiary to be actual living animals. You can read about her journey here;

"Her voice rattled with a sense of hope that Farmer Bill could only attribute to the fantastical mind of a child, yet, he couldn't untangle the sense of her question."

Entered into: The Old Barn Challenge

So thank you Vocal! For the fantastic opportunity to grow as writers, and for diversifying your picks to include fantasy stories in the later challenge winners. The Summer Fiction Series resulted in some truly incredible tales that may never have seen the light of day without the push of a prompt.

Receive stories by Rachel M.J. in your feed
Rachel M.J.
Read next: Appreciate Your Employee's Effort By Acknowledging Their Hard Work