by Dacey about a year ago in advice
Report Story

Your passion is right in front of your face! 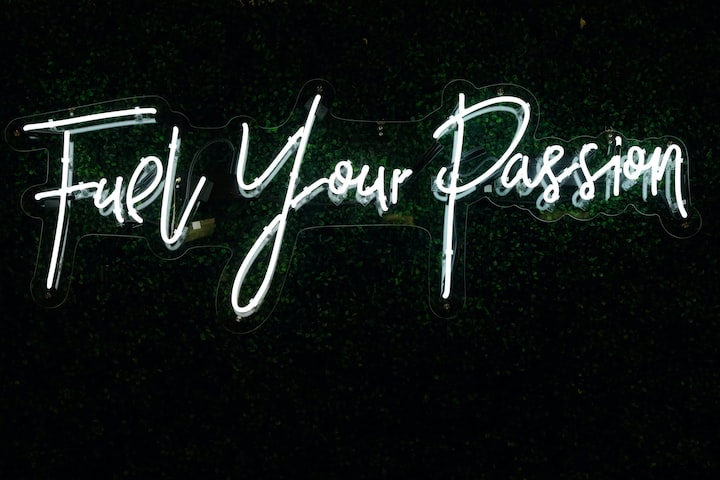 Photo by Randalyn Hill on Unsplash

It sounds so cheesy, doesn't it? You may be thinking, follow my dreams? How? I've got no time to do anything but work and work, and work again.

Sure, you may be swamped with work, but as the saying goes: all work and no play makes Jack a dull boy. Why not combine the two and never be bored working again?

Don't get me wrong, I fully understand that for some people, climbing the corporate ladder is their adrenaline fix, and it is their dream. But, that's not who I am reaching out to.

I'm reaching out to you, in the cubicle, depressed and bored out of your mind between spreadsheets and emails going back and forth.

You, the one with nothing exciting to look forward to besides the gossip at the water cooler.

With the World Health Organization claiming around 264 million people suffer from depression, it's wise to be proactive and think of ways to combat it instead of 'sticking it out' in your dead-end job. Everyone has a passion, even if we don't know it. If you could only spend some time reflecting on yourself, it will come to you like a whisper in your ear from the devil.

Now, grab onto that thought.

Let's say you're like my husband, who loves to fish and all things fishing related. I often find him staring at what is seemingly a still video on his smartphone screen only to realize that no, the video isn't paused he is watching someone else fish. I think to myself, not only does he find the patience (let's be honest, you know he's never patient) needed to catch a fish, he has the patience to stare at someone else doing it!

That's when it came to me: these videos are made by people whose job is to enjoy themselves.

I mean, if you're going to go fishing anyway, why not record a video while at it? Why not post it online for an increasing number of followers and get some of that ad revenue online blogs are always going on about?

You're right, there is no reason why. The worst-case scenario is: you went fishing.

Let's get back to finding our passions. As I've already mentioned, when given enough time to reflect upon themselves, everyone will find they are passionate about something or the other. Remember not to judge yourself. There is no wrong answer.

Here's an unexpected passion I've found some people have: making slime. If you're not interested, or if you think that slime sounds like a disgusting hobby for children, think again. Thousands of slime-makers are in their kitchens, whipping up their concoctions, and then either selling it or recording videos of themselves playing with it.

In 2017, so many people were 'sliming,' which caused a shortage of Elmer's Glue in the US.

With a little introspection, you can figure out what specific passion or interest you have. That is, if you don't already know. The next step is to find a way to capitalize on the idea.

Here's an example of the thought process behind this:

Let's say you thought about it, and the only thing that you really like to do is to make impossible bottles, like those with ships inside them. That is technically a craft, and it may not generate many sales to sustain your lifestyle.

However, surely, the process of building a ship in the bottle is inherently interesting because not many people know how to do it. Social media is full of people practicing various crafts, and surely there are people who would enjoy watching how the impossible bottle is made.

Recording videos for this purpose would never feel daunting or boring. (It is, after all, your hobby.) There might be a few details regarding establishing a social media presence and the technical aspect of earning money online, but that is only a small part of the whole process.

Finding your passion and devising ways to earn money while pursuing it has never been easier, so go ahead and do it!

This story was originally published here.

More stories from Dacey and writers in Journal and other communities.