About Roe vs Wade

by Melissa Eaves 7 months ago in humanity
Report Story

How is this an issue? 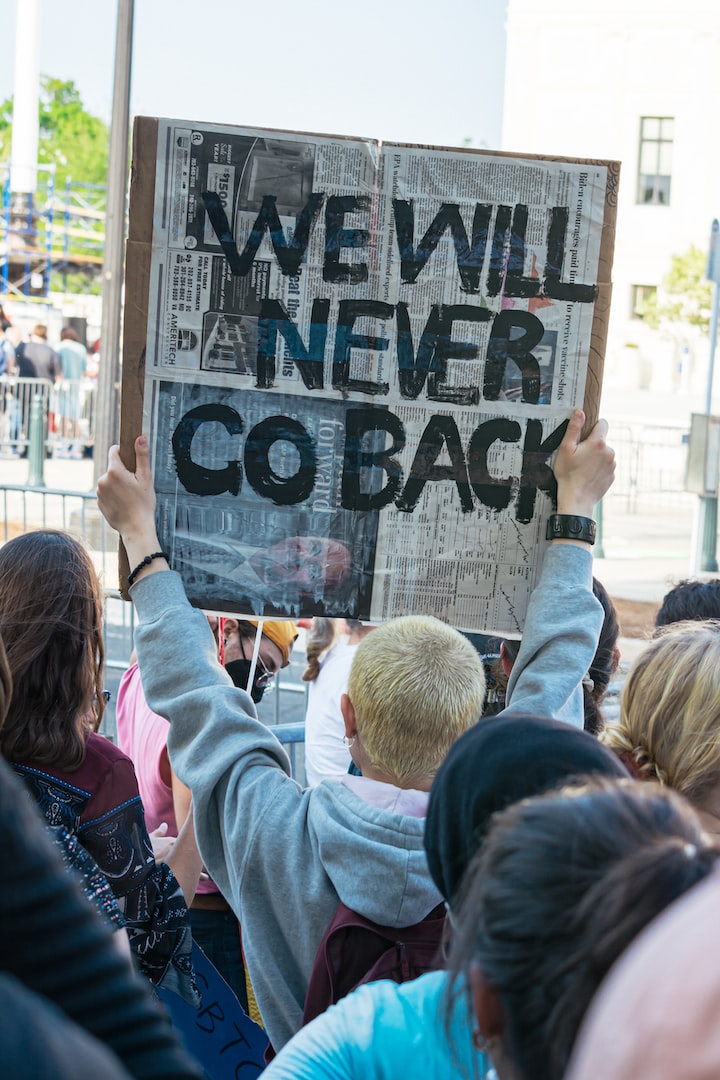 I just read an article that rattled me to my senses, and makes me want to scream at a litany of white fascists who tout a ‘woke’ culture while advocating fascism, and facets of life that would definitively be equitable to modern day slavery.

Allow me to digress.

Firstly, I have largely been ignoring the Roe vs Wade debate because it does not compute. How are we in our civilized, literate, and advanced society actually allowing this degenerative corruption to tear at the fabric of basic human decency within our culture?

Secondly, are we really being forced to waste our time to address an issue that clearly only has roots and premise in sexism, misogyny and slavery with clear references to sexual servitude and post emancipation proclamation style misogyny while we should be lobbying Congress and Corporate America for Environment so that we don’t die in our cultural progress and inclusive diversity?

The fury and indignation I feel at the mere mention of this as an actual issue is hard to take. My feminist feels futile and betrayed to the point of tears by acknowledging the literal reality of this issue. Not to mention that a a woman, a person, and a civilian I believed we had moved past this bleak time in history were now moving forward in victory with inclusion, tolerance and diversity to save the planet.

And then this which fully woke me to the fact that a slave owner mentality is intent on dominating our culture and destroying our lives.

It was a National Geographic article that in plain black and white statement of facts recalls for us the basic history of when abortion became questionable as a basic human right.

The beginning of the deliberations of a feminine right to her own body began( actually was first approached as an actual relevant issue) in the days of slave holding when slave owners were worried about “property damage” that abortion might cause as people were ‘their’ money making objects. A time when human beings were seen as nothing but possessions(Blakemore,2022).

Prior to slavery in the United States there was never a questioning of the woman who chose abortion before what was referred to in archaic language as the “quickening”.

Abortions were commonplace. They were literally seen as a part of healthcare and a fact of life.

Various natural methods and midwives were employed. The woman’s choice wasn’t even a matter of question. It wasn’t even considered a questionable or heinous act by the churches in those days, merely frowned upon in some instances as it may indicate sexual promiscuity(Blakemore,2020).

After slavery, however abortions became something to regulated as the woman was not her own. White and upper middle class women still maintained the majority of their “right” to choose.”

The second point of deliberation began when masculine doctors wanted more power than female midwives who helped women with natural abortions. What happened was that doctors began making money and more of it, at this point they began lobbying and arguing against female midwives saying that the ‘female reproductive, system should be cared for by professional men (Blakemore, 2022).

Hence a man, a gynecologist named Horacio Storer began the campaign of war against women (within their own bodies) by pushing that abortion be criminalized.

Because to establish a true history on the matter the woman’s choice to bear or not was never actually a question. It never received much thought nor required any. In natural states of advanced civilization it is a viable and generally not questioned normalcy, a known factor of humanity that women have choices. Historically, there have always been natural and homeopathic remedies as viable options to carrying a pregnancy to term.

For vast and unnamed readons are we able to live and choose to have or not to have children . But in basic summary and most importantly womens life expectancies are shortened and irreparable damage is done to their bodies when forced into unwanted pregnancies. Many women cannot even bare children or may die in childbirth.

What sort of Stone Age are we living in that the question of who owns a females body and or right to conceive and or have a child actually comes under deliberation.

I don’t know what this states to the rest of the world but to me it indicates a clear infraction upon human rights that is frighteningly reminiscent of Nazi rhetoric.

They have gone to far with this debacle.

Pro life is murderous. Many women may die in childbirth. It is symptomatic if a hatred of feminine empowerment and intolerance for differences that in this age stems straight from 1940s.

A bygone product, a left over remnant

Of slavery and the precursor

Blakemore,E. May 2022. “How US Abortion Laws Went from Nonexistent to Acrimonious”. National Geographic.

More stories from Melissa Eaves and writers in Journal and other communities.