by Mariam Naeem 3 months ago in monster 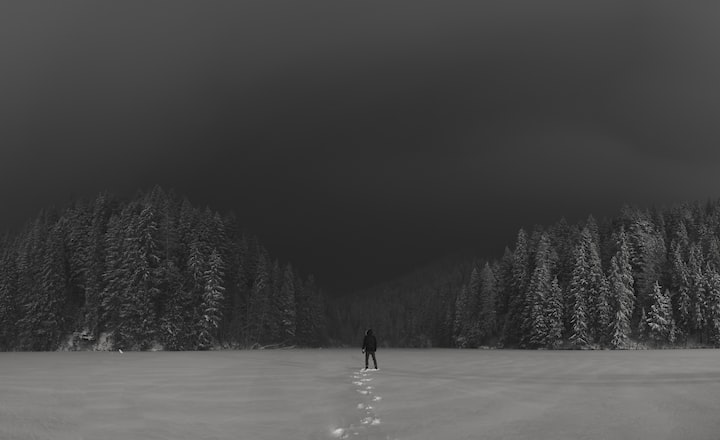 Photo by Alin Rusu on Unsplash

James and Thomas were the best of friends. They lived next door to each other in the small rural village of Best, growing up and sharing many adventures together.

Their favourite place to be was in the woods on the outskirts of the village, where they would imagine assassins, spies and shootouts. They disliked the Winter as it meant more time indoors and less time out there doing whatever they pleased.

One day however, both the boys’ mothers grew fed up with their antics indoors and sent them both out to play with each other. Best was one of the smallest and safest villages in the country and the locals took pride in that. Nothing ever happened there that would shock anyone.

James saw Thomas running his way with a couple of long sticks and knew there was an adventure underfoot.

Both boys were wrapped up warm. Their thick coats protecting them from the chill and the scarves they wore matched. They both had a fondness for the colour blue. It’s probably why they were best friends. Two peas in a pod. The only difference was where James was blond with brown eyes, Thomas was of a darker hair and skin tone with bright blue eyes.

“Where did you get those sticks, Tommy?”

“From my garden. There’s a whole pile since Dad was clearing up any mess around it. It’s great!”

“Well, I heard there were monsters lurking in the woods in Winter. I thought we could check it out, save the day, that kind of stuff.”

“I’m in! I heard they were big and gruesome and tore you up from inside out!”

“How does that work? They’d need to find a way inside your body first then!”

James frowned. “Oh yeah, I hadn’t thought of that.”

The boys made the ten minute walk to the outskirts of the village and started up a small path that led between the close-knitted trees, creating a darkness within. The trees were mainly deciduous and lacked any leaves but there were large evergreens littered here and there, casting shadows and lending an air of creepiness about the place. James gulped a little as he saw a spider scuttling over dead brush and out of sight.

“How far into the woods are we going Tommy?”

Tommy turned to look back at James and grinned. “Remember that pond we found in the middle of the summer? Let’s go there. It wasn’t so bad there. Plus, I heard that the monster lurks around there, waiting for thirsty animals so it can catch them and eat them while they try to have a drink!”

James grinned back slowly. “Okay, let’s do this!”

They saw the occasional crow flying past and a small robin chirped from above them in the branches of a withered tree. There were no other signs of life as they walked deeper into the trees, the light from the sky dappling through the branches to litter the area around them with shafts of light. It didn’t look so bad.

Suddenly they reached a clearing. A large pond, almost like a small lake lay in the centre of the large clearing. This was the pond the boys had found in the summer and had taken great delight in going for swims in. Both were equally strong swimmers, their mothers having made sure the boys knew the basics as they were growing up. As they looked at the pond now though, they noticed a thick layer of ice on the top, unbroken and smooth.

“Do you think we should have brought ice skates?”

“Why Tommy? Are we chasing the monster over the ice?” James chuckled at his own joke. “I think we should just stay off the ice today. We can come back and explore it properly next time. For today though, we have a monster to hunt.”

Tommy sighed. “It would have been good to try ice skating on that. It looks strong enough, doesn’t it?”

James just shook his head “I’m not doing it, buddy. What if it’s totally thin somewhere and we go under?”

Tommy bent down to pick up a smooth rock he found and looked towards the pond, a calculating look on his face. “Maybe if this makes noise, we can scare the monster into coming out.”

Tommy threw the rock as hard as he could and both boys watched it sail through the air and hit the middle of the pond with a loud clack. They couldn’t see if it had made any cracks or had broken through the ice.

A low rumbling could be heard in the earth and Tommy and James exchanged looks. “We didn’t do that, right?”

James let out a surprised gasp as he heard a loud thump coming from the pond. The thudding continued and Tommy and James backed away slightly in horror as they saw a dark shape under the ice, fighting to break the ice. Their eyes widened as they heard a loud crack thundering through the air. A few birds hastily flapped their wings and took flight from a nearby tree, escaping the sudden disturbance to their peace.

Tommy turned to James and narrowed his eyes. “Why don’t you go for once, scaredy-cat?”

James knew he couldn’t say no. Tommy always took the lead and for once, there was a chance for James to do so. He walked forward, brandishing his long stick as the ice kept breaking further, the thuds growing louder and louder and the splashing of the water beneath the ice could be heard. James reached the edge of the pond and pushed his stick forward towards the hole in the ice and dipped it in the water. The sounds suddenly stopped and the air seemed still as the water stopped churning and time seemed to stand still.

James turned back to look at Tommy. “I think it was just a big fish! I scared it away with the stick! That wasn’t so bad!” He started grinning and turned around to make his way back to Tommy, whose eyes grew wide in terror and his hands raised, the stick he held falling to the ground as he backed away a step, trying to point out the danger to James.

A thick black tentacle wormed its way slowly out of the water and crept it’s way around James’s ankle, wrapping tightly very quickly and yanking, making the boy scream with fear as he fell forward, hitting the dirt. Panic overtook him as he tried to scramble back to his feet but himself unable to as he was being dragged slowly towards the water. Tears streamed down his dirt smeared cheeks as he was drawn closer and closer to those frozen depths, unable to do anything. He gave Tommy one last look as his body was dragged in and under.

Tommy hyperventilated at the sight of his best friend being dragged under. He had been unable to move, his eyes fixated on the horrific sight of James vanishing, being taken by a monster he had made up. It couldn’t be happening. His breathing grew ragged as he felt something wet and slimy on his ankle and screamed aloud when he saw the beastly tentacle wrapped around it. He tried to look for the stick, but noticed it lay under the tentacle, broken in two.

Finding a small scrap of courage, he lifted his other foot and stomped down hard on the tentacle. A large screech flooded the area as the creature writhed in the depths, sending water flying everywhere as it wriggled in pain. The tentacle didn’t loosen though. Tommy kept stomping, hoping to cause enough pain that it would loosen its grasp and he could break free.

Another tentacle shot out of the water and made straight for Tommy’s neck, wrapping itself like an ugly black scarf around it and squeezing at the same time as it pulled the defenceless boy towards the water, fated to meet his best friend down in those frozen depths.

Tommy’s last thought before he was plunged under the water was that he should have never made up a monster.

The area was still and calm again. There were no signs of disturbance other than the break in the ice. The birds were again resting in branches in trees near the pond and all that could be heard for a second was a loud rumble of something settling back into the depths.