It’s been decades since it last burned 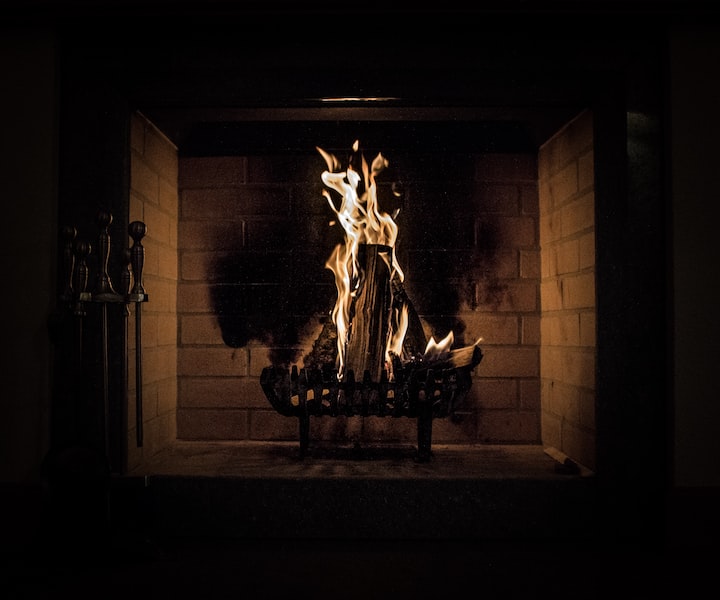 There’s something living in my fireplace. The ancient thing hasn’t worked since we moved in, and I imagine it’s been decades since a real flame scorched the insides of the cinder block chimney. Although, the blackened space where logs once rested is evidence that it did, indeed, once upon a time burn red and orange. Now, the only signs of life coming from the old fireplace, is an occasional spider emerging from the cobweb laden hearth. That was of course, until I started hearing the noises.

I started hearing the strange noises at night, while the house lay quiet. I could hear the low murmurs as I crept down the stairs. Each night, however, as I reached the landing where the living room became visible, the noises disappeared. Whatever was making the noises, clearly knew when I was coming, and made good to quiet each time I attempted to approach it.

Last night, however, I took the stairs from our master suite balcony instead of the main interior staircase to investigate the noise. I neared the living room window in anticipation to catch the night disturber in action, only to bump my forehead on the window before I could peer inside. Cursing at my stupidity, I quickly used my hands as a tent and glared through the window. No movement. I was just about to settle for another night of unanswered questions, when I noticed the tiniest movement on the fireplace stoop. It quickly leapt up into the cobwebs of the hearth. It was so small and quick; I almost thought it was a mouse. Until, at the last second, I caught a glimpse of something that I swear stopped the world around me. A tiny pair of legs struggled to get through the dense webbing. A tiny pair of legs wearing pants. Attached to a tiny pair of feet wearing shoes. There was no mistaking it, there was at least one tiny human living in the fireplace.

I could hardly sleep the rest of the night. My mind raced with thoughts of the impossible creatures that lived in our fireplace. The next morning, I called in sick to work. Once my wife and kids had left for the day, I hesitantly, but excitedly approached the fireplace. I crept quietly to the fireplace and used my fingers to create an opening in the cobwebs. Once I had torn enough of the webbing apart to see what lay beyond the hearth, I couldn’t believe my eyes.

Behind the hearth, I could see several small blankets and pillows scattered about. Unable to contain my curiosity, I pulled my phone out and entered video mode. I stuck the end of the phone through the webs and rotated it several times. I pulled the phone out and hastily hit the play button.

It was absolutely incredible. There lay an entire sleeping village of miniscule people at the back of the fireplace. There were too many to count. There were small tables, chairs, benches, and beds. They clearly weren’t modern humans; if I had to guess, I’d say they resembled the early settlers in appearance. I watched the video over and over again, trying to make sense of what I was seeing. All I knew, was that I had a call to make.

It was around 4:00 pm when I shook the man’s hand before he got back in his van and drove off. I had to hurry; my wife would be home with the kids soon. I raced to the living room and reached my hand up to the mantel searching. Once I had found what I was looking for, I knelt beside the fireplace stoop. As soon as I had finished, the front door opened, and the kids ran in to give me a hug. I looked up to see my wife enter the house. She flashed me a huge smile as she said, “You fixed the fireplace!”

I smiled back as I raised the lighter to the gas line of the fireplace. It didn’t take the fireplace repairman long to find the hidden shut off in the basement below the fireplace. With two clicks of the lighter, the old fireplace roared back to life. I slid the old glass fireplace doors closed and stepped back to admire its beauty. I pulled my family in close to appreciate the new life we had given the old fireplace. The excited chatter of my children almost masked the sound of tiny fists pounding on glass and the almost indiscernible screams that lay beyond it.

I’ve always been in love with creating. I dedicated over a decade to composing and recording music. Then I had to make more money for some reason.

More stories from Andrew Perkins and writers in Horror and other communities.