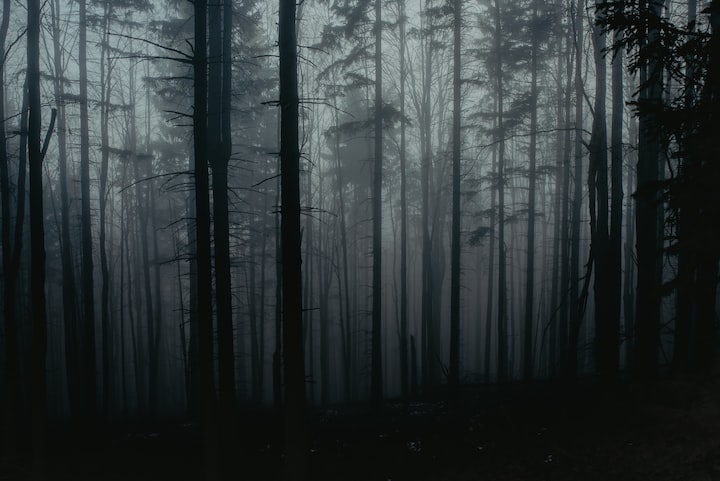 Photo by Sergiu Baica on Unsplash

Florence sat atop her rusted bike in the moss-covered yard. Eyes transfixed on the flickering that illuminated the black contrast of the cabin at dusk. Shadows dancing gleefully behind the flame. Keep on the path home, she thought.

The sun was setting below the horizon. Florence knew she had mere minutes to get home before the darkness took over. The Louisiana woods came alive after dark. An unsuitable place for a ten-year-old girl.

Nonetheless, she stood paralyzed by the flame. Its tendrils beckoning. An unseen force pulling her towards the door.

A sea of fog flowed from the swampy marsh behind the cabin. The crickets sang their summer song. The locusts joined for the chorus. The heat was sweltering. Florence paid no mind to the sweat dripping down her face. It pooled on her blouse. Soaking through to her skin giving some relief from the August heat.

The candle was all she could see.

Florence took a step towards the cabin. What are you doing? Every inch of her body knew approaching the cabin was a terrible idea. Yet, she kept moving. Eyes never leaving the candlelight. It was so beautiful. The flame gave her a sense of something new. Was it happiness? Life? Familiarity? Whatever the feeling, she wanted to be a part of it.

Florence approached the front steps. Rotting and caved in, she knew the dilapidated porch would not hold her weight. This is dangerous. Go home!

Mother nature had taken over the abandoned cabin. Moss covered the structure. Vines twisted and turned in and out of the wood planks. The pillars creaked under the weight of the rusted, red roof. Begging to give at any moment.

Suddenly, the door flung open with a force. A cloud of dust flew around her. Florence turned to flee but could not. Her legs were paralyzed. The ground moved away from her. Her body went limp as she floated into the house. Fighting was useless, control was no longer hers.

Her face paled with horror. All the blood rushed to her core. Fight or flight kicked in. With all her might, she tried to break free. She was unsuccessful.

Once inside, the door slammed shut violently. Her body was released into a heap on the floor. Florence wailed in pain. Heard only by the creatures of the night as the dirt road was lightly travelled. There were no houses for miles.

Inside, the cabin was dark. The candle gave no relief. There was a smell. Musty, rotting wood. Death. Her stomach churned.

“Hello.” Florence whispered, softly while rubbing her sore knees. She winced in pain as her fingers grazed an open gash. Tears flooded her face.

Florence blinked repeatedly trying to adjust to the darkness.

The cabin was quiet. Too quiet. Only the popping of the single white candle still burning wildly in the windowsill.

The air was cold. Too cold. It was summer in south, after all.

Florence got to her feet. She felt her way through the darkness to the door. It was locked. She fidgeted with the locks and the knobs. No give.

The window. Florence headed towards the window. There were no locks, but it would not open. She tried to break the glass with her elbow. No give.

“Please let me go.” She whispered into the darkness. “I just want to go home.”

Florence slid down the wall beneath the window onto the floor. Pulled her knees in close. Head resting on them like a small toddler. Sobs filled the cabin and echoed back at her.

Minutes passed. Her eyes eventually adjusted to the dark. The moon illuminated the inside the tiny cabin which was free of furniture. Or anything else for that matter. Dust covered every inch of the structure. Her nose and throat tickled.

A hallway appeared opposite the kitchen that Florence had not noticed before. There was a door at the end. She made a mad dash towards it.

The hallway seemed to go on forever. She ran fast and hard yet never reached the door.

Defeated, Florence stopped. Growing more terrified by the minute by whatever deception the cabin was displaying. Nothing made sense.

Suddenly, a door manifested beside her out of nowhere. Confused, she reached for the handle. It opened with little effort.

A spiral staircase was behind the door. Florence cautiously climbed the cold, metal stairs hoping that she could get to the roof and escape. A single door appeared at the top. She reached for the handle and entered the dark room.

It took a bit for her eyes to adjust to the darkness. Florence stood in the kitchen. Exactly where she had started.

She ran down the hall again. Another door appeared. Another staircase. She was in the kitchen. “NO!” She screamed. Repeating the loop over and over until she finally collapsed on the kitchen floor. Tired and hopeless.

Florence was trapped. She wanted nothing more than to be home in the safety of her mothers’ arms.

Mom is probably sitting on the couch in the living room talking to the Sheriff. Maybe they are out looking for me right now?

Moonlight rays lit up the cabin. A couch appeared. Florence was certain the cabin had been empty. She must have missed the floral couch in her panic. The couch was exactly like the one in her family home. Inviting and clean. Florence took a seat.

There was a pain in her stomach. Dinner. She never made it home for dinner. Florence was starving.

Though she knew it was a long shot, she checked the refrigerator. It was full of food. Fresh produce. Soups. Cheese. Milk. Strawberries. Strawberries were her absolute favorite.

Is someone living here? Where are they? I really wish they would unlock the door.

Florence grabbed the berries. They were cold and fresh. The refrigerator was working. Wait.

She placed the berries on the counter and went over to the light switch. The cabin came to life. It was beautiful. The floors were no longer covered in dirt. The vines were gone. The rotting smell was gone. The smell of strawberries filled the air.

Florence headed back to the kitchen. Atop the stove, there was a cake. Strawberry short cake.

Who made the cake, though?

“Hello. Is anybody there?” Florence called out.

Only silence answered back.

Florence grabbed a plate from the cupboard. Also the same tableware used by her family. She cut a slice of cake and placed fresh strawberries on top. She grabbed a glass of milk and headed to the couch.

The first bite was delectable. She had never tasted cake so good.

Though still very confused, Florence was starting to think maybe her captivity in the mysterious cabin was not too bad. If only there was a TV.

She finished the cake and placed the empty plate on the side table. A remote! A television was tucked in the corner beside a beautiful Persian rug. Yes!

Florence grabbed the remote and surfed through the channels. Mostly classics. She stopped on I Love Lucy. It was one of her favorites after all.

The cake was fulfilling and the temperature inside the cabin was perfect. Exhausted, Florence closed her eyes. Just a little nap.

The program was unlike anything Florence had ever seen. A group of teens sat on a giant rug surrounded by white candles. Hands interlocked together forming a circle. Eyes closed. They were whispering something she couldn't make out.

“This is stupid.” A boy said. He let his hands go from the circle.

Sighs and scoffs filled the room. “Billy, why do you have to ruin everything!” One of the girls asked.

“This is a waste of time Jessica. You and your stupid ideas. I am going to the truck to get a beer.” Billy replied.

“Just wait! This will work. We are almost done.” Jessica said.

Billy sat back down. “Hurry up. Megan’s party is starting soon, and I don't want to miss it.”

The group interlocked hands again and closed their eyes. Incoherent whispering filled the room. Florence drew closer to the screen trying to hear what they were saying.

“Wait!” Another girl screamed. She pointed to the TV screen. It was almost as though she was pointing at Florence through the screen. Or was she pointing past her…

All at once, the teens turned their heads in her direction. Baffled, Florence turned around to see what they were looking at.

What she saw could not have been possible. A sea of candles and six teens sprawled across the Persian rug. The teens were not on the TV at all but rather sitting in the very room as Florence. Watching her cautiously as though they had seen a ghost. Eyes the size of dinnerplates. A few on the verge of tears.

Florence froze. Unable to move just as before. Her body in a trance.

“Oh my god!” One of the other girls shrieked.

“I told you it would work. Don't break the circle.” Jessica said.

“This is so messed up.” Billy replied.

“Billy, don't move!” Jessica said. She went back to chanting.

Florence lost control of her body yet again. Her feet were lifted from the ground. She was floating towards the rug. Paralyzed. Hovering over the candles. Her body rotated until she was parallel with the floor. Face towards the ceiling.

Someone please help me! Only moans escaped her mouth.

“This is some freaky shit.” Another boy replied.

The flames grew larger. Florence could feel the heat on her back. Her flesh was burning. The smell made her nauseous. The pain was too much. A high-pitched squeal left her lips. It was not a human sound. It was otherworldly.

The teens covered their ears in agony. Faces contorted in fear. Screams and cries filled the cabin. Out the door they ran.

Florence came crashing down onto the rug hard. The candles fell over and the rug went up in flames. In a matter of seconds, the cabin was on fire. Smoke filled her lungs. Eyes burning from the smoke.

The fleeing teens had left the door open. “Wait for me!” Florence called from the porch. But they were gone. It was as though the teens disappeared into thin air.

It took Florence a bit to realize that she was free from the grasps of the cabin. She ran to her bike and prepared for departure but when she glanced back towards the cabin, it was fully intact. No flames, no smoke. Only a single white candle burning in the windowsill.

Florence sat atop her bicycle. Eyes fixed upon the candle. It was so familiar. So beautiful. A feeling of comfort came over her.

She let her bicycle fall to the ground and as though in a trance, walked back towards the cabin.

Had she not been distracted by the beautiful flame in the windowsill, she may have noticed the memorial where her bike rested. The etching read:

Our beloved daughter. Taken too soon.

More stories from Gelena Nicole Brown and writers in Horror and other communities.