by Reed Alexander 5 months ago in movie review

With The Color Out of Space soon to be released, I figure I'd give Cage one last chance, and see if he has what it takes to pull off Cosmic Horror of the likes of H. P. Lovecraft. I wrote an article a little while back, skeptical of Cage's ability to do the genre any justice. You can read that article at the following link: Nicholas Cage: What Does He Contribute to Horror?

However, I admitted in the article I'd yet to see Mandy. Lovers of the Lovecraftian genre hailed it as the best in a long time. And I'll admit, I instantly noticed similarities to some of my favorites Lovecraft-styled movies. Most notably was Lord of Illusions. The cult leader, Jeremiah is styled similar to the cult leader Nix, and his second in command is even named 'Brother Swan,' which seemed like an intentional head-nod. Director Panos Cosmatos must have also felt a little upstaged by Rob Zombie's Lords of Salem, as the two movies have a very similar feel. Until Rob's throws with the brown acid, Panos firmly held the title of 'horror weirdo' with his movie Beyond the Black Rainbow.

Technically Mandy failed my 30-minute rule, in that nothing really happens in the first 30 minutes of the movie. Every scene was irritatingly drawn out to the point where one scene was even in slow motion, and another scene was devoted, no shit, to waiting impatiently. It's like Panos knew he was being a dick by making the audience wait, akin to the Family Guy gag where Peter Griffin skins his knee. And that was the first 45 minutes of the fucking movie. Needlessly drawn out setup that seemed to intentionally punish the viewers and go abso-fucking-lutely nowhere. It's like Stanley Kubrick who always had two distinct movements in all of his movies... except annoying and not at all clever. 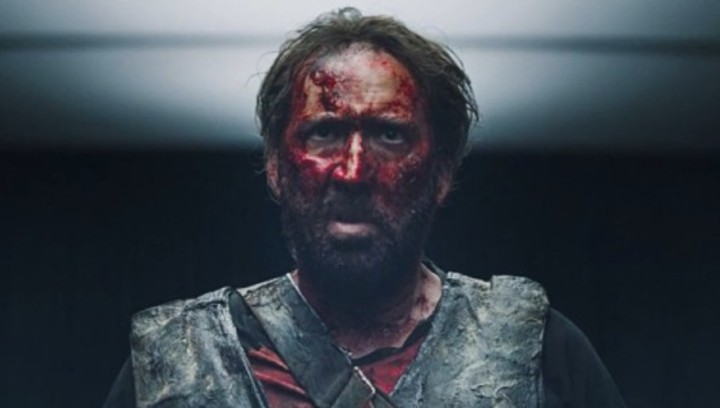 What's worse, this movie started out pretty riffable, and for the most part, actually enjoyable because of how hammy it tended to get. It's caused me to coin a new trope I call 'Fore-Caging.' This is like foreshadowing, except rather than hinting at plot to come, it hints at riff-worthy material that's on the way. I was promised that I'd get Nicolas Cage, completely untethered and further out of his mind than I'd ever seen him. But what I got was actually pretty good acting for horror. That's not what I expect from Cage, I expect him to deliver the ham of godly proportions. For a short scene, there was ton of 'Fore-Caging' setting up all sorts of quintessential Cage moments that he frankly failed to deliver on. I'm waiting for something well beyond 'Not The Bees' and what I got was standard hammy horror acting.

Some of the acting was actually even good. Richard Brake and Bill Duke made spot appearances that really amped things up a notch. The cultists and Mandy herself were even pretty solid actors, including names like Ned Dennehy.

And frankly a lot of the stuff in this film was too campy to even merit decent actors. There are these four bikers, who are actually more like mudders, or what I jokingly referred to as The Four Mudpuddlers of the Apocalypse. They were clearly intended to be serious antagonists, even perhaps demonic, but came off more like 'The Plague' from Hobo With a Shotgun. It's cool, and pretty metal, but it's also rather silly. As a mater of fact, a lot of this movie came off as a sort of half-cocked, death-metal video. Some of it was even a seeming head-nod to the animated classic, Heavy Metal. It was the sort of thing I expect out of an episode of Metalocalypse. Brutal, but impossible to take seriously.

Were it not for the scenes that were just impossible to take seriously, this movie would have been visually stunning. The lighting, filters, and practical FX were all very compelling. It made for a deeply gritty and murky atmosphere that forces you to turn off the lights, just to see the movie. Normally I'd applaud this, but then I go back to The Four Mudpuddlers of the Apocalypse, and it just ruins it.

All of that being said, this should have made the movie so campy, it should be riffing gold. But it's like they tried to make a movie that was both intentionally good and intentionally bad at the same time. A sort of "Let's make a movie out of some young metal head's wet dream, but try to make it serious." Those two things just don't mesh.

I don't think I can recommend this movie to anyone. Me and my wife did enjoy riffing it, and she really didn't pull any punches, but too often it left us bored and was underwhelming at the end. I can't even recommend it to Riffers.

I think the problem with this movie is that, at its core, it's really just lame revenge porn. Mandy and Cage's Character, Red, are taken by a cult. The cult leader, Jeremiah, fails to seduce Mandy, burns her alive, and leaves Red to bleed out. Red survives and goes on a murderous rampage intent on killing not just the cult leader, but the 'biker' gang that helped. Yeah, Panos tried to have the same kind of feel as Beyond the Black Rainbow, and yeah, there is clearly something otherworldly going on in the background, but all of that is lost in the dull overarching plot.

And for revenge porn that's supposed to be revolutionary, it brings nothing new to the table. The kills are even in the wrong order. Cage's character fights The Four Mudpuddlers of the Apocalypse in the first go, leaving half of the lame cultists to fight next. Yeah, there's a chainsaw fight, which is both a head-nod to The Texas Chainsaw Massacre 2 and Phantasm 2, but it's nothing new or even special. I mean, if they were going to go with a lame ripoff of 'The Plague,' they might as well have hired actor Robert Maillet, strapped a logging chainsaw to each of his arms and stepped it up a notch. Made a real effort to go full death-metal.

Instead, what should be the biggest fight is at the beginning, followed by a slow culling of the cultists, interrupted by the usual chainsaw fight, and ending with a monologuing Jeremiah, who even offers to suck Red's dick in an effort to save his own life. There's no demonic presence that tries to repel Red, there no Nix-like manifestation. Whatever the supernatural element is supposed to be, it just disappears completely. At least it wasn't 'the flying eye poke' from Lord of Illusions. It's still pretty lame.

There is nothing in this movie to give me hope that Cage won't fuck up The Color Out of Space. If anything, it proves that when Cage is given permission to go 'Full Cage,' he can't even do that right.

Give this a pass.

See all posts by Reed Alexander →