Poltergeists I Have Known

by Tom Baker 11 months ago in paranormal

When Books and Other Objects Go Flying Off the Shelves

I own a Ouija Board. I bought it at the behest of a dead woman, naturally. "Jenn" contacted me through automatic writing. So, I supposed that there was a writing to be accomplished. That was three years ago or better, and I still haven't gotten around to taking dictation for Jenn.

It is perhaps my reticence to do so that so infuriates the spirit. Or spirits, perhaps. I suppose there may be more than one. It could be that my Haunted Indianapolis co-author, Jon, (whom, I'm assuming, since I cannot track him among the living, may, in point of fact, be now passed on) may also have a thing or two to relate from the Other Side. Maybe my indolence over the years gets on his nerves. Could be, perhaps. But, I always assume my particular haunt (er, poltergeist, rather), is a female. Thus, "Jenn."

Walking the corridors beyond the reach of time, in the pale, mist-shrouded fog of confusion that follows a sad or tragic departure from this life, most certainly is a lonely experience. Imagine the colorful, bright and sensory-rich world of the living existing, just beyond your spectral grasp, ever-ready with its warmth and temptations. And you reach out, to take it in your icy, ectoplasmic fingers—only to have your image, your soul-self, your ruach, pass through, unable to take hold of the warmth, of the pulsing, breathing, and living world you have left behind forever (unless, of course, one credits the idea of reincarnation).

To look at those you love going about their daily lives, eating, sleeping, working, laughing, loving and immersed in dreams and ideas of play and, most importantly, rest (in the sense of NOT wandering the personal purgatory of these lost souls)—well, therein must lie a special torture only the damned in Hell can ever truly describe.

But, damned or not, the "dead travel fast," as Bram Stoker tells us, and so, they also are still involved in a sort of service for OTHER ghosts; or, perhaps, beings that we are not certain were ever human. (We don't know how these things are decided, or if it is a voluntary servitude, but it seems as if, in the case of "Jenn," she acts as a "control" for another spirit, frequently garbling the messages. Which, on the whole, is a disincentive for taking dictation. IF you are on the other side of a planchette.)

The afterlife (or at least, some aspect of it; maybe the purgatorial, immediate "waystation" wherein confused, and lost, and tragic souls wander, unless and before they make their way "to the light." Assuming that they ever do.) I'm assured, is full of mournful and wandering spirits, those sad shades who did NOT find their true and resolute pathway through corporeal existence, but, instead, squandered the biologic life granted them, leaving the Earth Plane with their duty unfulfilled, their mission aborted, their life's purpose forever lost in the murky recesses of the Eternal Question.

But needs must go whom the Devil drives. And so, tasked as being the secretary for an invisible "friend," my profligacy is irritating, even to one whom, strictly speaking, time must really not be a measurable constraint. Hence, I sometimes am reminded, I am supposing by "Jenn," that she is still there.

45 RPM records come flying off the wall from where they were hung, for decorative purposes. Apparently, my poltergeist is not a fan of the late ukulele-brandishing Tiny Tim.

Books, as already noted, come flying off the shelf. Maybe it is a mouse, the skeptic might conjecture. Maybe so. If so, the little bastard has followed me from one apartment to another, across miles and miles, stowed away in my luggage or something, only to reappear in yet another invisible form, to overturn a soap dish in the bathroom while I was standing in the kitchen.

The way these things happen is: A noise of rattle-clatter. Something falls to the floor. Bang! I go to see what it is. The mind grasps around for a minute, trying to find some rational explanation as to how the thing accomplished itself with no breeze; or, seemingly, no other cause to cause it to fall or be pushed from where it was placed.

But there never is a rational explanation. So, when an instrument cable comes unwound, snake-like, from the door handle around which it was wound, while I am sitting there staring at it in disbelief (and, would you believe it? Listening to Tiny Tim), I know that this is "Jenn's" way of telling me, "It is time. It is time. What are you waiting for?"

But, I am still waiting. And, I am really not certain why. Perhaps because they feed off of OUR energy too, (as a psychic reader, I can assure you of this), and that it is so exhausting just letting them communicate—even using the Ouija Board. It is equally exhausting, at times, reading Tarot for customers, if I go very deeply into trance states; but, NOTHING is as draining as working with the literal disincarnate.

Poltergeists (German. Literally, "noisy ghosts.") are known for their propensity to do any number of odd things: throw rocks, drops of water, rap on walls, ceilings, floor boards; curse, sing songs of praise, leave their imprints in the form of claw marks or hand prints on the faces and bodies of their victims.

The "Bell Witch" of Tennessee was a spitting, cursing swearing trio of disembodied horrors-"Black Dog," "Mathematics," and "Cypocraphy"—that smelled drunk while rapping walls, stopping coaches along dusty roads, swearing, singing gospel hymns, telling secrets, and causing weird growths in the throat of the tormented and clueless farmer John Bell. Who, according to accounts, was poisoned by "Old Kate," the putative "Witch, when she replaced a medicinal tonic he was taking with poison. He was the first casualty known in the world of ghosts; one of a very, very few.

Ghosts are known to rattle, gibber and wail. Less frequently, they move objects around, hide them in unlikely places; more rarely, they will reveal the presence of a lost or unknown object that had long been hidden. In Hydesville, New York, the birthplace of Spiritualism, in 1848, the Fox Sisters, Margaret and Kate, were involved in an extended communication with the departed entity known to them as "Mr. Splitfoot," who communicated with them via "raps" on the floorboards of their house. They later confessed that they had faked the "rapping" via cracking their toe joints—an explanation that seems only slightly less likely than that the raps were the literal work of a consciousness that had, somehow, survived bodily death.

In the classic film Poltergeist (1982), directed by the late Tobe Hooper, of Texas Chainsaw Massacre infamy, the family of little Carol Anne (portrayed by tragic child actress, the late Heather O'Rourke) is haunted and cursed by a succession of special effects specters, who blaze across the silver screen, dripping the oozing, gore-colored ichor of the other world, while the soundtrack shrieks at the audience from the deepest recesses of their wonder and fear. In a comic scene, the father of Carol Anne (portrayed by actor Craig T. Nelson), opens the door of the vanished little girl's room for a trio of paranormal investigators. Her toys and furnishings are spinning in a cyclone tunnel of activity, guided by invisible hands. A toy record player flies by, its needle placed into the groove by inviable fingers. Likewise, a toy horse and cowboy with animated legs goes spinning through the air. What is moving them?

Later, a glass moves, guided by no discernible agency, across the dining room table, while the ghost chasers snap eager photographs. Even worse, little Robbie Freeling (portrayed by actor Oliver Robins) is strangled by his stuffed clown during a thunderstorm. I have, of course, never had anything happen like this—except, occasionally, the bed will shake as if someone is making it do so.

I suppose we'll get that ghostly book written, someday.

Poltergeists have been said to pop the corks out of bottles, erupt into choruses of howling noise (not, strictly speaking, always the sorts of noises humans could make), cause mysterious objects, such as fruits and nuts to rain from the ceiling, stuff the clothing of their victims with feathers, and act in other, more bizarre ways. (And, let's not forget, the propensity for poltergeists to cause mysterious FIRES.) Some don't even credit them as being spirits in the traditional sense—seeming to manifest around pre-pubescent girls, they are sometimes thought of as mere poorly-projected psychic energy.

We're not certain either way. We roll with the punches. 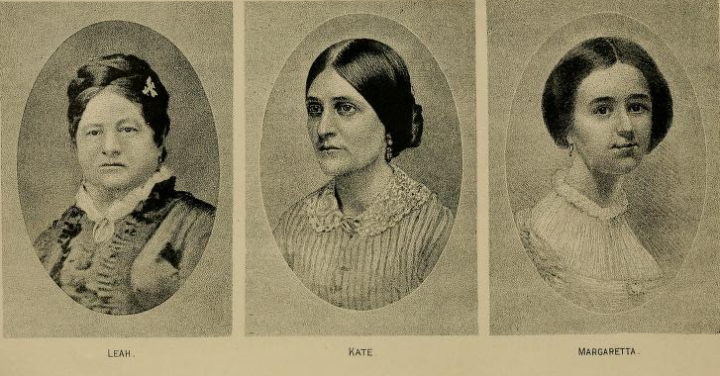 Not conventional beauties by today's standards, the Fox sisters (pictured above) were, nonetheless, superstars in their time for having claimed communication with the departed "noisy ghost," Mr. Splitfoot.

See all posts by Tom Baker →