by Carlos Gonzalez 2 years ago in movie review

Oscar winner Helen Mirren and Aussie star Jason Clarke in a horror film that keeps us intrigued—for the most part.

I often wary of movies that are "based on true stories," or "inspired by true events," if only for the fact that it's just code for "We're just giving you the more bullshit version of a story that is purported to be a true story." That being said, Winchester or the much longer, box-office worthy title: Winchester: The House that Ghosts Built manages to tell an intriguing story that seems to have some root in fact. Fact: the name is indeed synonymous with the iconic rifle and firearm company. Fact: it seems to know the players of that story inside and out. Fact: it was filmed in the actual home where said hauntings and paranormal events had occurred.

OK, I cannot delineate that as an actual fact, but I wanted to see if any of you were paying attention.

Winchester is the second Spierig Brothers movie to be released after the absolutely diarrheatic torture porn reboot, Jigsaw, from last year. I was actually expecting something even more subpar this time around. That would be a real head-scratcher since I don't think Academy Award winning actress Helen Mirren would attach her name to something that was closely resembling landfill. To my shock, surprise, and utter delight, it wasn't the fiasco I expected. Realize of course, that I do follow the Rotten Tomatoes school of movie rankings and I know that this movie is somewhere between horse manure and seeped inside the earth to act as fertilizer.

Nope. To my amazement, I didn't hate it. I didn't exactly love it either. No, this film isn't Poltergeist set in a Victorian mansion at the start of the 20th century. But the film's old school opening credits weren't lost on me, either. It clearly intended to entice us, the audience, by introducing us to characters who are straight out of 60s and 70s horror movie scenarios. The doped-up doc who swallows medicinal ether-like Pez candy, but can still function. The curmudgeonly, eccentric old woman who is not insane, but isn't about to blaspheme the spirit world either. The creepy ginger child who is the vessel for an otherworldly demon and his mother, the concerned niece who almost never does anything too motherly. 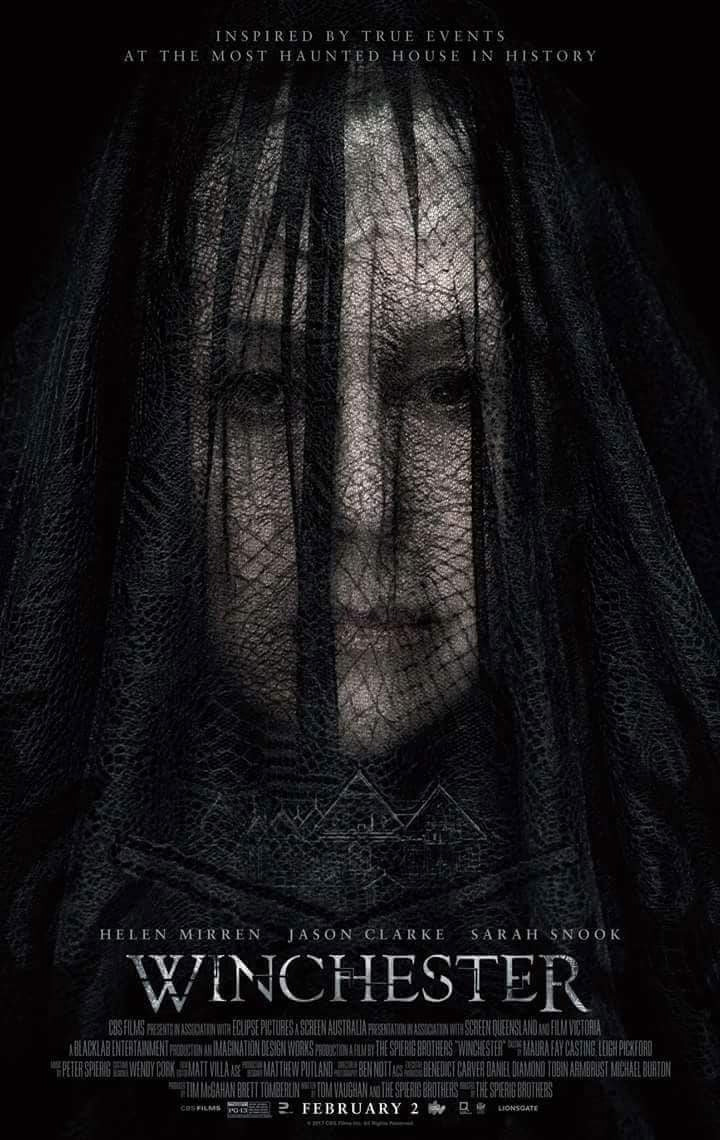 Plot gist. Dr. Eric Price (Aussie actor Jason Clarke known for playing mostly villains) is summoned to the Winchester mansion at the behest of her board of directors to check to see if Sarah Winchester (Mirren who epitomizes cool in every role she takes on) is losing her marbles. It would appear so considering she's become a recluse; is constantly altering the mansion to suit her needs. She has her niece (Sarah Snook) and grand-nephew looking out for her interests, never mind the fact that ghosts haunting the place keep her oblivious to the "keep him safe" house protocol.

After several sessions, Dr. Price becomes a witness to the fact that Mrs. Winchester's home is a haven for angry spirits who were all victims of her product. They were all murdered by her firearms and are now on the hunt for some serious netherworldly karma towards her and her family. She can't keep them at bay for much longer and the now semi-sober good doctor may even be the key to stopping all this drama by fessing his role in Mrs. Winchester's product being the one close call that may redeem her and her home.

In closing, Winchester is a solid guilty pleasure that boasts a few really good scares and two terrific performances that feed off each other's manic energy. Mirren adds a surprising amount of depth to her guilt-ridden, beleaguered gun matriarch and Clarke brings a brooding, restrained, almost pensive intelligence to his tortured doctor character. When I saw the trailer, I actually joked out loud that this was the first horror thriller targeting the NRA. No, not really, but it has an innate, goofy charm that kept me interested almost all throughout. Will the film break box office records and be remembered three months from now? I highly doubt it. But that doesn't mean it didn't entertain and perhaps thrill me for the time allotted.

Rated PG-13 for intense supernatural horror sequences—none of them too bloody that you can't handle them.

A passionate writer and graphic artist looking to break into the BIG TIME! Short stories, scripts and graphic art are my forte! Brooklyn N.Y. born and raised. Living in Manchester, Connecticut! Working on two novels now!

See all posts by Carlos Gonzalez →

The darkness can be both scary and terrifying. It's like the gate way to hell but much worst. No man or woman would dare to enter it, even the priest would dare to bless it. The air grows thicker, and the lights get darker but you keep going. You get to a gate that reads "do not enter;" feeling hesitant you push the gate open and the nightmares began. Once you enter you feel a little disoriented but you continue despite this uneasy feeling your getting from the gate. A few minutes of looking around you see a flight of stairs leading to a door. Once you get to the door, you start to smell flesh. You want to turn back but it's to late to go back. Slowly you push the door open only to greeted by Satan himself burning one of the lost souls from heaven. Before you can turn to run away he turns around and looks at you with his piercing black eyes and says, "I've been waiting for you all day, now now it's your turn to join the rest of the lost and damned souls who have banished me in this dark pit." You scream for help but no one hears you. He grabs you by the arm and throws you in to the fire. As you begin to burn alive he laughs in a dark chilling voice and reaches for you body one again to mark 666 on your chest. The burn was enough to wake you up in a pool of sweat. Hoping it was just a nightmare you grabbed your cross and slept with it for the rest of the night hoping Satan doesn't return to mark his next victim. You went to see a priest the next day to tell him about the weird dream you had. Ask you begin to tell him his face starts to shift, his eyes began to bleed, horns start to appear from his head. As you began to leave your feet are nailed to the ground, and your hands are nailed to the chair. Once the priest raises his head his face is now black and his eyes are a piercing black and red color. He then grabs you and proceeds to cover your body in satanic signs and scars. Each burn felt like a bowl of hot coal being dumped on your skin. Each scratch felt like cats clawing at your flesh. All you could do was sit in pain hoping it would end. Just when you thought it was over he gets one of his minions to beat you with a iron rod. He heats the iron rod and starts to beat you with all the force he had in his little body. Each beating felt like someone punching your stomach back to back. As the beating continues he grabs his pitch fork and stabs you.