by Amy Lynn Jenkins 2 years ago in fiction
Report Story 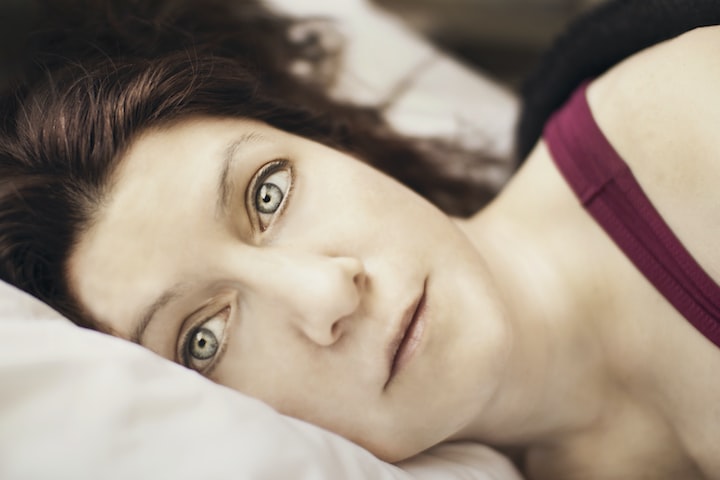 Shawna bolted up in bed, then turned and looked at the clock on her nightstand, “Thank god it was a dream,” she exhaled in relief. Sensing the urge, she got out of bed and walked into her bathroom. On the floor, she saw towels covered in blood. She began to panic. Then she looked at the sink which was also covered in blood. Shawna began to freak out, “No, no, nooooo, NOOOOO!” she cried in hysterics as she slid to the bathroom floor and cradle herself, “it was a dream, it had to be a dream,” she sobbed. Then Shawna heard the laugh, quiet at first; it was Katie standing in the doorway of the bathroom. As Shawna looked up at her Katie’s laugh sounded more maniacal

“You wish it was a dream! I gave that bastard exactly what he deserved!” Katie laughed

“NO!” Shawna said in hushed excitement.

Shawna bolted up out of bed dripping with sweat and breathing heavily. She reached for her phone to check the time. It displayed 3:05 AM. Groggy, Shawna got out of bed and walked into her kitchen. Shawna poured some milk into a glass then put it in the microwave for 30 seconds. While she waited, she went to a section of pill bottles on her counter, opened one, and took it. The microwave beeped and Shawnna took her milk to the couch.

Later that day Shawna sat across from her publisher again in the same chair. Susan was reminding Shawna yet again of how important it was that she finish her current book. This time the office was threatening to sue for violation of her contract. Shawna was stuck though, she couldn’t figure out how to end the book, and her current issues weren’t helping. She had one week to figure it all out and get it on paper; Susan had kept them off of her for as long as she could. Susan admonished Shawna; reminding her that she asked for it, now she needed to finish it. Susans' message could be boiled down to one phrase; get writing now.

Susan left and Shawna was pleased to have a moment to herself to process the events of the days before until Katie walked over to the table; latte in hand.

“Jeeze what the hell is her friken problem! She better be careful I might accidentally back over her in the parking lot.”

“She is just doing her job; and she is right’” Shawna whispered.

” Listen to you! What? you’re just going to roll over and take it? How can you let her talk to you like that? I’d gut her in a heartbeat if she talked like that to me!” Katie was incensed.

“Was it something I said?” Came Katies teasingly sarcastic tone, “Ok let’s talk about what is bothering you.”

Shawna looked at Katie with a stern and venomous look before whisper-shouting’ “shut up,” and driving off in her car.

Back at home, Shawna sat on a chair while Katie sat on the couch “I Just don’t know what the hell I’m doing anymore, I’m almost 30 and I have no Man in my life, no kids, my mom keeps bugging me about grandkids, I can’t seem to write anymore which means I might be jobless. No men seem to even want to look at me and no job will hire me it’s like I’m useless, do you know what it feels like to be useless?” Shawna directed the last part at Katie, “Sometimes I think it would be better if I just killed myself like everyone would be better off if I were dead and gone.”

Katie stood, angry she yelled back “Don’t you even think about it! You selfish little bitch! You have no idea, just don’t, don’t even joke about it!” Shawna stood up as Katie approached still yelling, “You can’t, don’t even think of doing that to me!” Katie and Shawna were nose to nose when suddenly, Katie grabbed Shawna by the throat and began to choke her. YOU WILL NOT! Do you understand me?” Katie yelled at Shawna with a wild look on her face; and her hands squeezing until Shawna lost consciousness.

Shawna bolted up in bed, looked at the clock on her nightstand, and swallowed hard. Her throat was sore. She touched the bruises on her neck and cried uncontrollably. She slowly rose out of bed and walked into the bathroom where she could see the bruises on her neck; still crying she turned on the hot water then walked to the kitchen.

Shawna returned to the bathroom with a knife and closed the door. She placed a stopper in the tub and let it fill with water. The hot water caused steam to spread on the mirror. She noticed writing that said, "Don’t do it". Ignoring the message Shawna climbed into the hot tub with her pajamas on and slit her wrists.

Shawna shot up out of bed again drenched in sweat, this time with bruises on her neck. She quickly grabbed her phone and checked the time; 5:32 am. Shawna then touched her throat; bruised. She jumped out of bed and ran into the bathroom. She saw the bruises which formed a handprint on either side of her neck.

I am a novice writer just looking for a place to get feedback!

More stories from Amy Lynn Jenkins and writers in Horror and other communities.