Hello. My name is Dave.

by Chandler Olof about a year ago in fiction
Report Story 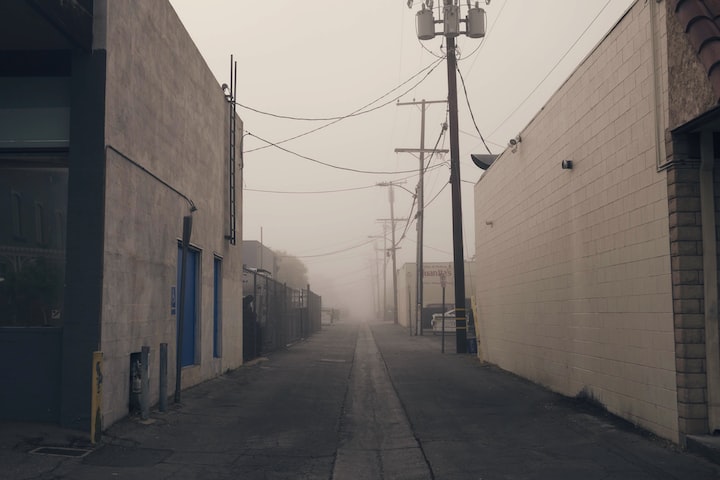 Photo by Cole Patrick on Unsplash

He snapped another pen. The simple ritual prevented the annoying trial and error of trying to write with a husk. It dropped to the floor, paper-ridden with overdue bills and red tape and blackmail. Well, that’s probably what it all was. Nothing like that mattered anymore. He was hunched over, sitting under someone’s desk in a dusty abandoned office, hacking away at a safe. He grabbed another pen from his backpack side pocket instinctively; furthering his scribbles of tried combinations in the Sudoku puzzle book he finished last year. "Thank God I found you," he said to the combination safe. His mind was starting to wander too easily throughout the weeks. Or months. Room was running out on the number filled pages from all the failed sequences. He thought that maybe he should try the largest numbers and work backwards; meet in the middle. But he decided against it. After his typical three hundred attempts, he stood, and packed his things. "You'll open eventually."

He walked the hollow veins of the city. The echoes of the crunching dirt beneath his steps hummed in unison with the unique whistling of gusts squeezed between skyscrapers. Not that he noticed. It had been this way for a while. Half of everything in this world was rust-colored. Most of the rest, green; Mother Nature’s favorite. Either that or fog surrounded everything. The sun was to set in an hour or two; better hit the gas station.

He slid the dead automatic door open after waving his arms in front of where the sensor used to be. It made him smile. “Hey Dave,” he said as he walked to the counter. A mannequin with an inked smiley face, wearing an apron, stood behind the counter. Canned food was all over the shelf behind Dave and knickknacks cluttered the counter top; but Dave’s prized possession, a flask with Dave’s name engraved into it, was out for all to see. “You shouldn’t be drinking at work man.” Dave stared at him as he began opening his backpack. “No. I’m fine with it, believe me. I just think it might make your other customers uncomfortable. But hey, you do you.” Dave continued to glare. “No, it didn’t open today. But it doesn’t mean we didn’t make progress,” he smiled. He jumped up onto the counter. Everything shook, even Dave, causing the mannequin to rotate from the small bouncing the jumped caused, allowing Dave to look him in the eyes now. “Remember when I got you that flask buddy? Yeah, good times. I’m sure you can hook me up today right?” He jumped back down. “You know how it is. Supply and demand just changes the value of these things constantly on me. You just let me know what you can take okay?” Dave shot him a look of disbelief. “I got four soda tabs for that canned beef ravioli.” Dave stood his ground. “A battery!? Come on Dave, you think I’m made of money here? Look,” he dug through his pack, “two rubber bands, still usable; and two of the four tabs I just offered.” Dave agreed. “I knew you couldn’t resist!” He dropped the money on the counter, grabbed the can, and turned to leave. “I’ll see you tomorrow!” he exclaimed as he shut the sliding door. Dave stood for the rest of the night, facing the empty gas station.

He slurped the leftover sauce from the can as he guessed at the combination once more. Hunched over, clicking away under the desk. Then, one more click that was louder than the rest. His eyes opened wide. He pulled the little door open and found bundles of crusty yellow dollar bills. "You finally cracked." His excitement was short lived. As soon as he picked up the money, he remembered how finishing the Sudoku book felt. Nothing left to do. He’s got to find something else. The sun was about to set; better hit the gas station.

The familiar echoes met him with a happy beat as he sang a little song in his head, one of the few he remembered. Not his favorite, but too catchy to forget over the years. It was just another brief bliss, because when he saw the gas station, the window next to Dave’s counter was smashed out. He ran. He frantically looked around after a panicked shove into the door knocked it off its track. “Dave!” he shouted. Dave had been knocked over behind the counter and his left arm had popped out of place. He rushed to Dave’s aid and tried to resist the urge to be hysterical. “Don’t worry buddy. I’m no medic but I’m gonna fix you up. Who would do this to you?” he reassured Dave. He popped Dave’s arm back in place and began wrapping his last bandages around Dave’s shoulder. “You’re not gonna believe it man. It finally opened. Twenty thousand. I’ve never held that much in my hand all at once.” Dave was all patched up and returned to his cashier post.

He got up, brushed himself off and returned to the front of the counter. Just as he leaned on it to small talk Dave, he noticed something on the shelf; replacing the canned ravioli he bought yesterday. A small black notebook. He had never seen it before. A strange feeling began to rise in him at this realization. This could be a spurt of destiny thrown into his face; unable to be ignored, it had the possibility to change everything. "New inventory Dave?” Dave dismissed it. "Okay. I get that you don’t wanna talk about it but whoever did that to you last night obviously left that there. Is it one of those electronic ones or...?” Dave was adamant. “What if they wrote something? Plus, the safe is cracked. I need something else to do now. It's a paper one isn't it? If they wrote something it won't be erased." Dave's tight reasoning began to loosen. "Well that makes sense! Now you're running this place like a business! How much you selling the notebook for?" he asked with glee. However, Dave's hard glare met his joy with force, and something snapped.

"$20,001?" he said before completely registering the request. His newfound feeling of purpose, as quickly as it came, was robbed and replaced with rising indignation. "You know I haven't seen a dollar for how many years, Dave. And now I find this much and you ask..." he laughed just before the sting consumed him. He looked down at the floor, hands on the counter, and sweat mixed with tears began to fall as Dave stood; looking out into the reverberant city. "Why are you like this man? I thought you would hook me up. I just need to see inside." He started to reach over the counter for the notebook, but Dave threatened him. "I hook you up! I got you a flask! I used my bandages on your arm! I gave you a goddamn face! A FACE! You'd be nothing without me Dave! NOTHING!" Dave didn't even break his smile. "That stupid smile took me two whole pens Dave! What if I needed those for combos to the safe huh? You wouldn't have your twenty grand. And yet you treat me like this!" he screamed. He jumped on top of the counter and looked down on Dave. "I've been trying to hold on. To my humanity Dave." Silence from the statue. "But you don't even care. You MONSTER!" He kicked Dave in the head; the corpse fell decapitated. The rebound of the lifeless body resounded over and over in the empty metropolis.

After the consequences were done ringing in his ears and the city alike, he got down, laid by his old friend, and began to weep. “I’m sorry Dave,” he said as he grabbed Dave’s skull. He put their foreheads together. “Please forgive me. What would you say right now?” Silence. “I’ll never touch that notebook Dave. Just to honor your legacy. You were there for me when no one else was.” He peered up at the notebook from the ground, hearing the dirt tangle up in his hair and skin as he spun his head. “But I guess you would’ve died in vain if I don’t.” He began to rise from the leftover ashes. He grabbed the book off the shelf and opened it. Blank. He winced, ready to cast the little notebook as far as he could into the maze of humanity’s gravestone. He turned to throw, but an epiphany struck him. His eyes met an old advertisement on the building across the street. A billboard with a smiley face had the word ‘HELLO’ in a bold font, followed by a faded phone number. He looked back at the counter and saw the flask. ‘Other customers,’ he thought. ‘Even though it’s blank, someone still put it here.’ He opened the book on the counter, took out his last pen, and wrote, “Hello. My name is Dave.” Dave placed the notebook back where he found it and put the pen next to it. He looked outside once more. The sun was setting. Better get home.

More stories from Chandler Olof and writers in Horror and other communities.