by J.W. Bost about a year ago in psychological
Report Story 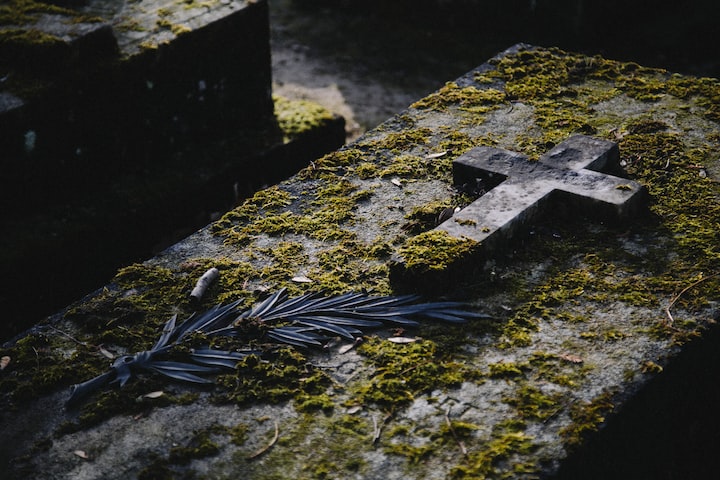 Photo by Kenny Orr on Unsplash

Life teaches one many lessons. Death teaches more. The silent stillness echoes in his mind. There are no more birds in the trees. The sky is gray and scorched. A man, a silver wolf, a salt and peppered beard stands in an empty house staring at the blank screen. He remembers the last thing he watched. The day the bombs fell. The last effort by man to save themselves from the dark.

Years, perhaps longer, he does not know how long it has been since then. Each day came with a flash and each night stayed to wait out the seconds. He must follow the rules. A prisoner of his own home. The man walks around his house. The pictures of his lost family hang loosely and crooked on the walls. The floorboards creak in disrepair, the ceiling has leaked for many years. The cobwebs hold not even the spiders anymore.

The empty house is still and cold. Yet, he does not light a fire. He warms himself another way. Atop the mantle a bride and groom and underneath, baby shoes, never worn. A woman, his wife, remembers the day they took her. The day she gave birth and he learned the first rule.

They leapt through the window to grab her, and pulled her into the dark. He remembers her scream. Her last words that of loss and fear. The day death did them part.

Sitting atop the mantle, an old child's drawing. Best friends forever. He remembers the day they took him, his friend since Kindergarten. The memories stain his soul. The games and laughter of another life. He remembers the day the kind heart suffered. How they tricked him to feast upon him. People wounded and limping, shambling towards the house. He rushed out to save them. When he realized it was too late.

2.There are no other people, it is a trap.

His parents. Old and gray, his childhood led to this point. They prepared him for the world, or they tried to. You often outlive your parents, yet this doesn’t make it easier. They say music heals all wounds. Yet, the silence rings in his ears, the deafening solace the quiet world brings. The last thing they did still echoes in his. They both departed this world smiling to a song.

The collar. The red collar on the mantle, he was just a small part of the man's life, but the man was all of his. He remembers the rowdy puppy. Happy and kind. The day they took the dog too. He feels the tears try to escape, yet they cannot break through. He holds the bloodied collar. All that is left. The night he let him out, the night never he never came back.

4.Stay in the light, they mostly come out at night.

He leaves to the kitchen to review the rules, and although he sees his face every day. The drawing on the fridge leaves the hole in his heart.. The child's drawing, a bloodied print on the side. He remembers his kind laugh. The world he wished he could give. His son, his life, his legacy. You never prepare to bury your child. He was all he had left. The day they took him was the day they took his soul.

One night. One more to live a normal life. To live things the way it used to be. Before it was ripped from him. Now he knows all the rules. However, the rules built through this loss hold no significance. Survival seems dull. He would weather any storm for his family, but he has no family anymore.

The midday comes. The generator in the basement used once, still cranks, and spurs good as new. The light in his house illuminates the home it once was. The memories, the laughter. The dinner table, now a host of cans and tools. The music he plays is the best thing he has ever heard. He does not remember the songs anymore, but he is sure this is what heaven sounds like. One last night he dances with the bottle. The brandy and bourbon. The first laughter he has felt in decades perhaps. His heart flutters with the joy of a thousand lifetimes. He watches them gather around the house, yet, he does not care. They stare in the window, yet he does not care. His laughter echoes across an empty house. For a night, he is somewhere else. In a world long gone.

As twilight breaks he stares at the graves, dug in front of the house. He thinks of his life. He remembers the course and rotted wood of the shovel. He remembers how it rained, a reflection of his soul. Now, he stands at the door, locket in hand. The shape of a heart holding the pictures of those closest. Those dearest to his heart. He walks out the door into the dark, lightly lit by the house. They stand around him, mouths agape. He knows they are not people, yet he is no longer trapped. Their gaunt gray bodies, still as the silence. He looks at the pictures one last time. He has the rules to live, a code of pain, built by loss. He did not choose this life, but he can choose death to join them.. He knows he will not see the sunrise and he has broken every rule. As the teeth and claws, meet his skin and bone. The locket drops and shatters to the ground. Although his heart was already broken, many years ago. He feels inside his chest a match, burning, ever present. It is not pain of flesh and bone, but a pain of soul and mind. So he with his final breath an everlasting sound. The silence now broken, a scream heard all around.

I have a passion for writing, especially anything closely akin to the horror genre.

More stories from J.W. Bost and writers in Horror and other communities.