by Kristi Flowers about a month ago in psychological
Report Story

A Candle Burned in the Window 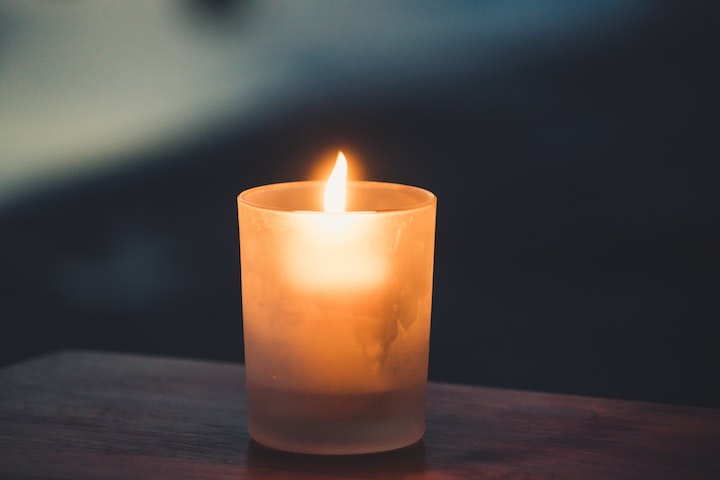 Photo by Paolo Nicolello on Unsplash

The cabin in the woods had been abandoned for years, but one night, a candle burned in the window. It looked like one of those candles that were battery powered and wasn’t really made of wax. I know that because my mother used to have hundreds of them in her house. My sister and I used to joke that when dusk rolled around everyday the house would look like a funeral home, with all the battery powered “candles” strewn about and flickering endlessly.

My mother, now that was a person that I had not thought of in a while. She died seven years ago, quite suddenly, and when my sister told me that she was gone, I immediately went numb. I didn’t cry, I just stared out the kitchen window and imagined how much my life would change without her around. The following week was a whirlwind of family gatherings and funeral plans, all the while, I never said a word. I was present physically of course, but emotionally I was blank. I sat at the memorial service staring at the floor trying to see if I could remember who all the people were and how they knew my mom, and for that matter, if she even liked them.

I stared at the candle in the window much like I stared at the floor at the service for my mother. My eyes fixed and glazed over, shallow steady breathing, and a blank stare. I was in my car driving home from my nursing job, exhausted to my core, but felt the need to drive up the short path to the cabin to check out the candle that brought back so many memories.

As I pulled up to the cabin and got out of my car, that familiar feeling washed over me. The numbness, the slow and steady breathing, and I could feel the blank stare take over my senses. I pulled myself back to reality and started walking to the door. I took the knob in my hand and twisted it. The door opened silently and easily. I peered inside the door frame and noticed a giant rag weave rug in many colors. It took up almost all of the floor spice in the small living room. The cabin had a musty smell to it, like it had not been aired out in years. The smell was starting to make me nauseous, but I couldn’t make myself move to get out and leave.

I walked to the even smaller kitchen and noticed a butcher knife laying by the sink. It looked old and rusty, but I knew it was not rust. It was dried blood. Old blood that had been caked on still after many years. No one had come to this cabin to clean the knife. It was still in the same place that I had put it seven years prior. Nothing had changed. The battery powered candles were still strewn about the cabin, but all the batteries had long since died. The old rag weave rung still had the stains in it from when I wrapped her body in it after stabbing her with the butcher knife. There was still a giant blood smear in the upper corner of it from when I dumped her body in the woods. I never bothered cleaning the rug. I knew no one would come back there and look at it. No one cared. I knew no one who attended her service cared about her, they all made up the stories, that’s why nothing seemed familiar. Just seems strange that after all this time one of the candles started working again, and it was the one in the front window.

I know because I put it there after I killed her.

More stories from Kristi Flowers and writers in Horror and other communities.