by Krystal Katz 4 months ago in comics
Report Story 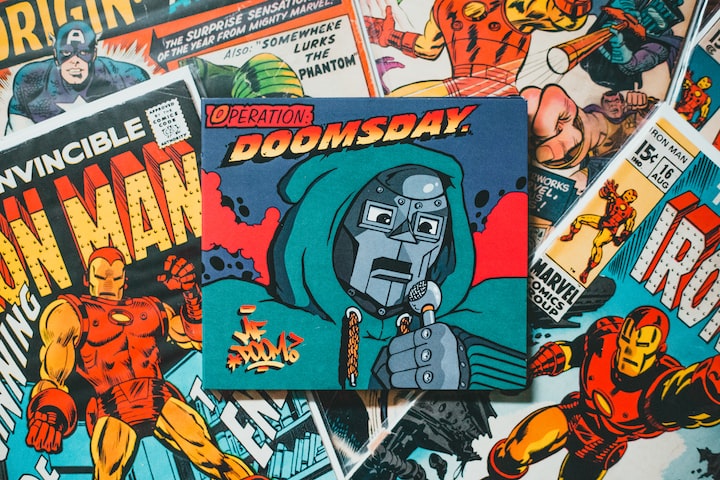 We love ‘em, and movie-theater workers hate ‘em (mostly because we wait in our seats for the entirety of the credits to roll and they’re trying to clean for the next show). What are they?

At the start of each Phase in the MCU, there are a new set of end-credit scenes that tag along with the movies as they appear in a very strategically placed order. Sometimes we’re lucky enough to understand what they mean right away, while other times we wait with excitement until the near-end of the Phase, where it is finally revealed what we’ve been waiting for. Now, with the end of the MCU’s Phase 3, we have delved into Phase 4 with all new end-credit scenes from movies like Eternals, Black Widow, Shang-Chi and the Legend of the Ten Rings, Thor: Love And Thunder, Doctor Strange in the Multiverse of Madness, and the various Disney+ shows. Each one does a good job at both confusing us and also exciting us about the direction of the current and next phase of the MCU.

Note: these are not ranked in terms of importance to the MCU (if that were the case, the list would probably look a little different). These are instead ranked by how much I have personally enjoyed them.

Also note: this contains potential spoilers for the entire MCU, so reader beware.

Now, without further adieu, I give you my list (and only hope that it might be as awaited for as a beloved end-credit scene).

The first on my list is one of the end-credit scenes following Spider-Man: Far From Home. In this scene, Mysterio tells everyone the identity of Spider-Man, and it is a total game changer. It leaves chills up my spine because I know that the MCU (and Peter’s future) will never be the same. His whole super-persona is built around him being an anonymous, neighborhood hero, and the public’s perception no doubt changes when they find out that the hero that they trust is a high-schooler (oh, and also now a villain, according to Mysterio’s helpful little video).

In this scene, it is also clear that Peter Parker is panicked, and I admit that I felt a similar emotion, hands clutching the edge of my seat in the theater, when I saw this for the first time. This is just a crazy moment for sure that speaks volumes of the changes and complications for the MCU and its characters, which is why it has made this list.

This scene at the end of Guardians of the Galaxy has made the list for sure because it is just so cute! How can you resist a small, dancing tree? Before this event, poor (and heroic) Groot had become a twig after sacrificing himself to save his friends. In this end-credit scene, then, we get a glimpse at what will become of Groot... and it’s adorable! Baby Groot dances in this scene when Drax isn’t looking, and every time he turns, Groot stops. While comedic, it’s also informative in that we see that little Groot will continue to grow and thrive (and also be a little bit mischievous)!

In the end-credit scene following Avengers: Infinity War, we watch on sadly as Nick Fury and Maria Hill turn to dust-- but not before Fury calls on Captain Marvel! This scene is both sad and exciting to me, as we watch more characters disappear but also have a new confirmation: we finally know that Captain Marvel will indeed make an appearance with the rest of the Avengers in the next movie! Now, we are only left to wonder how she will play a role in Avengers: Endgame and how she will respond to Fury’s call.

As Captain Marvel is a very powerful being all by herself, she probably could have an easier time defeating Thanos if left to her own defenses. So, I, at least, remember wondering how she would make an appearance so that, in terms of making a good movie, she would not defeat Thanos in one quick spell and leave nothing for the rest of the Avengers. I also wondered what she had been doing in all the time since we last saw her in her debut movie. And I could only hope that my questions would be answered. Now, having seen Avengers: Endgame, I can say that they have.

At the end of Spider-Man: Homecoming, we are blessed with three end-credit scenes. But this one makes the list because A) it’s Captain America, and B) because it’s just a funny scene. Although not terribly informative, I love this and I can’t help but smile when I see it. Funnily enough, these little public service announcements, which Peter Parker also watches before gym class and in detention, are hilarious for the fact that, while Captain America has become a public icon and role model for kids at school, at one point he’s also somewhat-sort-of wanted. But he still remains this important figure in teaching good morals and life lessons to the students. These scenes also get me laughing because it gets me to wondering how Steve Rogers was convinced to star in these.

At the end of Captain America: The First Avenger, we have an end-credit scene featuring Captain America, Nick Fury, and a punching bag. Captain America has since been released from his frozen state, and Nick has come to give him his next mission (which we can only guess will be the Avengers). Here, we get a look into Steve Rogers, the man out of time, who is clearly working through some stuff. Although strong and alert, you can tell from his expression that he's a bit worn.

But, we know the sort of man (and soldier) that he is, and he is not the type of person who would ever give up, especially in fighting for the greater good. Even in beating up his punching bag, it is clear that Steve Rogers still has so much fight left and he will go wherever the mission takes him. This end-credit scene gives us a look into the future of the MCU, hinting at the Avengers Initiative and beautifully connecting one movie to the next.

Gloriously placed at the end of Captain America: Civil War, this end-credit scene is another that does not really add too much information to the future of the MCU but gives us a wonderful laugh. It highlights Stan Lee in all his greatness as a FedEx delivery guy and shows us how Rhodey is faring with his new pair of legs after the airport battle in Civil War. This is one of the most comedic (and quotable, in my opinion) end-credit scenes. Stan Lee misreads the name of Tony’s package as “Tony Stank” and Rhodey will not let it go. He hilariously jokes of a reservation for "Mr. Stank" by the bathroom.

At the end of Black Panther, we finally get to see what becomes of James Buchanan Barnes. He’s taken out of the cryogenic sleep that he was put in after Civil War, and his mind has been altered by Wakandan tech to protect him from HYDRA’s brainwashing. Now he’s living a peaceful life in Wakanda, far away from the fight. Although this scene isn’t long, we’re given vital information about the well-being of a character who has played big roles in the MCU as both Steve Roger’s best friend and the main protagonist against SHIELD in Captain America: Winter Soldier and Team Iron Man in Captain America: Civil War.

One of the great talents of actor Sebastian Stan is being able to convey so much with just his eyes and his facial expression. In this small scene, Bucky’s expression alone shows us how much he has transformed since his Winter Soldier days but also how far he, as an individual, still has to come in forgiving himself for things he’d done that had been out of his control.

At the end of Captain America: Civil War, Bucky agrees to be put into cryogenic sleep. He doesn’t want to hurt anyone else, so he’s sacrificing himself to the freezing temperatures so that they can figure out how to fix his mind. He’s deeply apologetic for what he’s done, and this is one of his ways of making amends. This is an important scene because it shows us where one of our vital characters has ended up following the events of Civil War, and we can also see the toll that everything has taken on him— Bucky doesn’t want to give up... so he instead “gives in” in the hopes that it’ll help him continue to fight the good fight when his mind and body are on the same page. We also have a quality conversation between Steve and T’Challa, as well as a look at Wakanda (for what I believe is the first time).

I just love this scene at the end of Captain America: Winter Soldier. After the events of the movie, Bucky Barnes still has a lot of work to do in the memory and forgiveness department. But in this very small scene here, you see him at the museum looking at his own (and Steve Roger’s) past. You can see that he’s beginning to remember things, and it’s an emotional scene because -- and this is another one of those moments that Sebastian’s acting is phenomenal -- I can see the recognition in his eyes and imagine him saying things like, “What have I done? How do I come back from this?” It is another scene that, with just a simple stare, does wonders for letting us know what is to come. And, while I don’t think we fully know what will happen to Bucky at this point, we know that he’ll make more appearances and likely be on the road to redemption.

Originally not even intended to be an end-credit scene and added after the fact, this end-credit scene following Avengers is my absolute favorite. It doesn’t hint at anything to come and it doesn’t give us much information (other than, apparently, how the Avengers like to eat their shawarma). But, it is a hilarious scene with earth’s mightiest heroes taking a well-deserved break after defeating a bunch of aliens.

At the end of the Battle of New York, Tony Stark mentions shawarma, and thus the end-credit scene idea was born. Funnily enough, this small bit of dialogue from Tony Stark is also ad-libbed from Robert Downey Jr. So, I guess, in a way, we can thank RDJ for this lovely addition of an end-credit scene.

And, now for a fun fact: as this scene was shot after original filming, the reason that Captain America is leaning on his fist is because Chris Evans was already growing a beard for another role and had to wear a prosthetic jaw.

Now, if you didn’t know of the Marvel end-credit scenes before reading this, I hope that I enlightened you, and I encourage you to watch them all! If you have seen all these end-credit scenes, why not give them another watch?

I'm an aspiring writer and also an animal lover! I'll be posting the story of my two newest puppies, Daisy and Beanie, here! I hope you enjoy!

More stories from Krystal Katz and writers in Geeks and other communities.