The Staying Power of Casablanca

by kit vaillancourt 3 months ago in movie

This is a movie about love, yes, but not about the power of it.

My dad and I are both classic movie fans, it's one of the few things we bond over. We have a ritual of meticulously combing TCM’s weekly schedule and recording anything that sounds interesting. It started last summer; I was too depressed to go outside, and instead sat for hours, near-vegetative in front of the TV as Ben Mankiewicz talked about movies I’d only heard referenced in passing. I like a little bit of everything; my dad, as of late, watches anything related to WWII—typical middle-aged white dad fare—and that’s really where it starts.

I was old enough to have some critical thinking skills, but too young to really apply them the first time we sat down and watched Casablanca together. It’s one of the two classic movies we own a physical copy of (the other is The Maltese Falcon), and my dad’s favourite. I was 12 or 13, the DVD was brand new; I didn’t care much about the story, I just wanted to have something in common with him. It was the perfect movie.

You see, my family are avid Disney-goers, and we've always agreed that Hollywood Studios is destined to be a half-day park. My dad dislikes musicals, taking the stage shows out of the picture; my mom dislikes roller coasters; which excludes the big name rides, I was too old for the parts geared towards children, and too young to understand the references other parts hinged upon. The one ride that seemed to satisfy us all was the Great Movie Ride.

Hollywood Studios, as the name suggests, is obsessed with cinematic history. Not just everything that falls under Mickey Mouse’s white-gloved domain, but with the Golden Age of Hollywood itself. The Great Movie Ride, a semi-interactive half-hour dark ride housed in a recreation of Grauman’s Chinese Theatre which took the audience through dozens of classic movies, is the purest distillation of the spirit of Hollywood Studios. But I’m getting off track here. Casablanca, owing to its status as one of the greatest movies of all time, was among the heavily featured in the ride. Sam’s piano used to be one of the props displayed in the queue, Ilsa confronting Rick for the letters was part of the reel of scenes presented before the ride itself, Rick and Ilsa’s tearful airport goodbye is shown towards the end of the ride in animatronic form. That movie was part of me before I even watched it. Hearing the first mournful notes of Max Steiner’s recurring Ilsa theme still makes my heart ache.

Last January, we got gussied up to go to the theatre and watch it orchestral backing. This past January it was my first movie of the year. When it ended, my dad turned to me with a grin best described as boyish and asked my favourite part, now that we could discuss this movie as adults who both have a passion for it. My favourite part is the La Marseillaise scene, because I’m a bleeding heart optimist, because I remember hearing it played by a symphony and struggling so hard not to cry. His favourite part is when Captain Renault shuts down Rick’s for the flimsy charge of gambling, saying that he is “shocked, shocked to find gambling in this institution,” before being handed his winnings. I’m not here to knock the comedic value of Casablanca because it manages to hit every humorous beat, I just think it’s interesting how my dad enjoys the lighthearted aspects while I’m incapable of focusing on anything other than the politics.

We both like World War II fiction, that’s another area our paths converge. He reads a lot of books about finding hidden Nazi treasure, or killing Nazis, or other high-action low-empathy plots that involve Nazis getting their comeuppance one way or another. My tastes are very specific. I like reading about how women and girls were affected by the war. I can’t read anything that doesn’t at least marginally talk about the human cost of war. Casablanca is the perfect middle for those two sets of requirements: it’s extremely well-made anti-Nazi propaganda that focuses on the humanity of the victims of fascism. Rick Blaine is an undeniably cool man who’s presented as a mere observer of the atrocities going on around him with no particular stake in the matter, until we learn he isn’t. 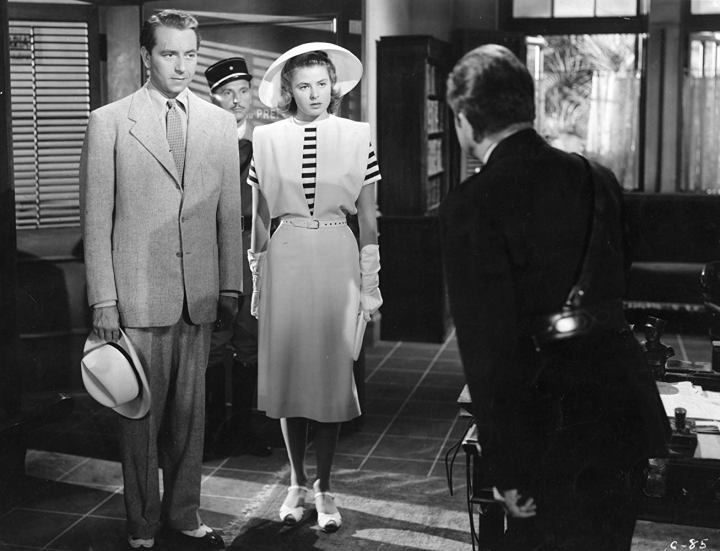 Rick’s character arc is part of the reason why the movie works so well. He’s morally grey enough to appeal to fans of Bogart’s noir fare, while his heel-face turn away from neutrality works to generate sympathy. Rick's character arc works for the same reason why his and Ilsa’s love story is considered one of the best: it starts in the middle. The viewer is informed that Rick’s previously fought on the losing side against fascism in two prior instances, but is not given any flashbacks to explore that further; at the end of the film, the viewer is left with the knowledge that Rick and Louis made a conscious decision to stand against the Nazis but never get any closure on whether or not they survived. Similarly, we are shown the middle and end of Rick and Ilsa’s relationship, but not the beginning. We see them in love but do not witness the act of falling; the knowledge that it was in the past is enough. Ilsa’s relationship with Victor is treated the same way, no beginning, no easily tied-up end, just a messy middle. The beginning is foregone, the ending ambiguous.

It took a few watches for me to actually look up the year Casablanca was made. I always assumed it was filmed post-war because of its boldness, the way it seemed to know what was happening, what was going to happen like the writers had double vision. In 1942, the war could have gone either way, the beginning already a relic, the ending equally as murky. It works as propaganda because it does not approach resistance as an anonymous monolith, a stock image of teenage boys in uniforms throwing their bodies into a war that could not get enough of them. Every character in Casablanca is a person, could be you. You could be in need of help, you could be the one helping, you need to wake up and contribute in any way possible. Because art does not exist in a vacuum. This movie does not exist without context.

I am thinking about how early in the movie, Peter Lorre is arrested in Rick’s, how he’s dragged out screaming and begging for help while Rick watches, impassive. I am thinking about the way Lorre, who was Jewish, fled Germany after Hitler’s rise to power, pleads with Rick to hide him even though he knows it is too late.

I am thinking about one of Conrad Veidt’s earliest movies, Different From the Others, one of the earliest film to show homosexuality in a sympathetic light. I am thinking about how he publicly denounced the Third Reich and spent the rest of his career, unable and unwilling to find work in Germany, playing Nazis in America as villainous or ineffectual as possible.

I am thinking about how Ilsa Lund was made Norwegian. In the obscure play upon which the play is based, Everybody Comes to Rick’s, Ingrid Bergman’s character is an American named Lois Meredith. It would have been simple to make Ilsa is Swedish to match Bergman, but there is one reason why this change is extremely necessary. Sweden was neutral during the war, Norway was under Nazi occupation.

I am thinking about the cast full of immigrants and refugees, playing immigrants and refugees; of Madeleine Lebeau’s tear-soaked face at the end of her national anthem; of all these people, many of them Jewish, many of whom lost family members to concentration camps, or, like Victor Laszlo, spent time in some themselves. I am thinking about the courage it took to make this film.

This is a movie about love, yes, but not about the power of it. This is a movie about how sometimes you have to put love aside in favour of the greater good. Romantic love is a beautiful, powerful thing but it will not keep you warm. It will not win wars for you. Maybe love and patriotism alone won’t save us, but they’ll give us one hell of a fighting chance.

Kit is a university student, old movie fanatic, lapsed theatre kid, and possibly three raccoons in a trenchcoat. They write about books, movies, and general queer things. Follow them on Instagram or twitter @kitnotmarlowe.

See all posts by kit vaillancourt →