by Jesse Terrance Daniels 6 months ago in literature 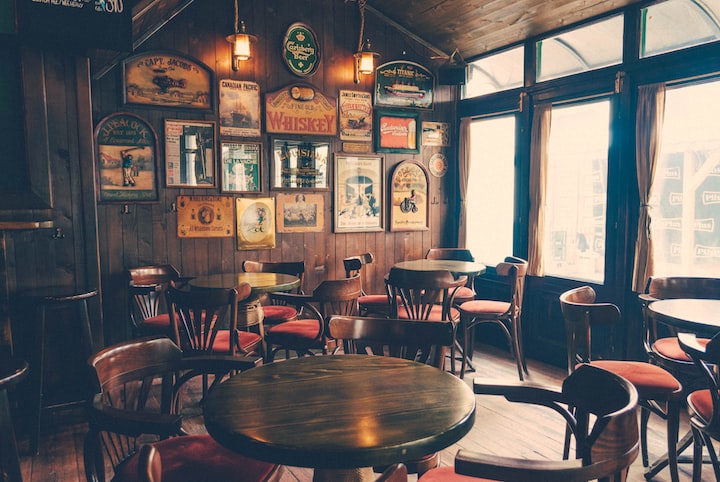 Photo by Nikola Jovanovic on Unsplash

The band was whipping up a frenzy of song, filling the pub with music, and Greta was swaying back and forth, mesmerizing with her hips. She circled the floor, causing folks to get out of their chairs and move. She could get even the grittiest, most ruthless thug to begin tapping their toes at least, watching her gracefully swing about the space. Greta was a curvy woman, a unique beauty with enthralling charm. Perrmo was having trouble himself, doing his best to watch the bartender while Greta’s enchanting dance continued.

Perrmo sat in a dark corner near the entrance. He was keeping one eye on the door and another on the bartender, occasionally glancing over at Greta. He wanted to catch the moment when the bartender would leave for his usual evening puff. Greta and Perrmo had been staking out the pub sporadically for a couple of weeks now, not to raise any suspicions from an abrupt appearance. It became clear that the bartender liked to take a break every evening around midnight. He would walk down into his basement and smoke a pipe. That’s when Perrmo would obtain the rare one-of-a-kind necklace that was kept stowed away in a small chest behind the bar. Perrmo’s job was to acquire the chain using his refined set of thieving tools, while Greta used an enchantment to keep everyone distracted. They even got Lloyd in on the heist, playing loudly in the band on his mandolin, adding to the magical lure of Greta.

Lloyd looked over at Perrmo for a moment to notice that he was busy stuffing some smoking herb into a long wooden pipe; this was the signal. Lloyd struck his strings harder and louder, bursting forth a wave of magical sound, lifting everyone in the room to their feet. The energy in Lloyd’s fingers sprang forth through the strings and echoed off the walls. The music was so powerful that the entire pub was dancing. The remaining people that weren’t on the dance floor moved away from their chairs and tables to cut loose. Only the bartender and Perrmo remained unfazed. Being a magical bard, Lloyd focused his enrapturing melody on everyone but them and Greta, who maintained her enchanting dance.

Greta could distract anyone without the use of her magic. But, when she loosed the enchantments, everyone gaped, overwhelmed with admiration. Greta was pleased the rouse was working properly and could tell that Lloyd had ramped up the melody. She, too, peeked over at Perrmo, who was now puffing away on his pipe. Her glance then turned to the bartender, whom she expected to be enticed by the stench, but it hadn’t reached him yet. Greta circled the room once more, swaying her body to the beat, picking up a partner here and there only to relieve them after a few steps. When she looked back at the bartender, he was sniffing the air, searching for the culprit.

Perrmo caught the bartender making his nasal assessment as well, right before their eyes met. The bartender, and owner of the establishment, gave Perrmo a subtle nod, appreciating that he was seated by the door to enjoy his smoke. The smell then drove the owner to pack his nightly pipe of finely ground herb and trot downstairs, basement bound, to take his usual break. Slowly removing himself from his chair, Perrmo crouched low and stayed tight to the wall, tiptoeing his way to the bar. The back of the bar was blocked off by a small swinging door attached to the side of it. Perrmo simply had to make his way through the door, behind the bar, and break into the small chest.

Lloyd quickly swiveled his head back and forth to check on Perrmo’s progress. He could see that Perrmo was resting his hand upon the door, ready to pull it open. Lloyd glanced back to his mandolin, his fingers, and then the crowd. He didn’t want anyone to notice what he kept checking on. The dimly lit room helped with the subterfuge; no one would have likely seen Perrmo crouching even if they had looked right at him. Before Lloyd could turn his head again, he heard the piercing creak of a well-worn hinge fill the room like the bleating of a rampant goat. Lloyd did his absolute best not to look at Perrmo and instead at Greta. It was clear from the flash of fear that washed over her face that she had heard it too, but she did not stop dancing. Lloyd did not stop playing. As they both looked around at the tipsy patrons, not one of them turned toward Perrmo.

Greta tried to ignore the sudden sweat that crept in with her subdued panic. She played it off and continued to enrapture the crowd. Dancing away from the center of the room toward the outer wall, Greta had a better view of the entire pub and noticed Perrmo had just slunk behind the bar. She was hoping that the bartender did not hear the creaky hinge, like the stupefied crowd, or at the very least that Perrmo could get in and out quickly. She wanted to return the necklace for the promised reward and go her own way. Greta had become tired of traveling with Perrmo and couldn’t stand Lloyd for any longer than a single job. The last thing she needed was for this heist to go to hell. She grew nervous that Perrmo was taking too long.

The floor was wet, sticky, and stank horribly. Perrmo was struggling with his tools, growing more and more frustrated with the foul floor he had been crouching so close to for far too long. Fumbling with his fingers, growing hotter by the moment from the dense, perspiration-filled air, Perrmo gave a last twist of finesse and popped open the lid of the small chest. He reached into the red velvet-lined interior, freeing the necklace from its place of rest, and held it up at a crouching eye level, smiling with pride at his accomplishment. The bartender had a radically different look on his face, standing in the doorway, watching Perrmo in those last moments before barreling forward to attack. The bartender arched his body for a giant right hook down at the crouching thief. Perrmo, perceiving the assault in his peripheral vision, turned and performed a backward somersault evading the strike and rising to a full battle stance in one quick motion of recovery.

Up on stage, the band continued to jam as loudly as ever, and Lloyd forced himself not to look over at the brawl occurring behind the bar. He wasn’t sure how to continue, the whole point was not to be seen, but Perrmo had been made. Though, technically, he and Greta were still in the clear. No one had any reason to suspect that they were involved. They were simply a musician and a dancer, nothing more. Perhaps they could both go back to the life from which they came as traveling entertainers. Lloyd had truly enjoyed getting to know Greta in order to accomplish the heist. If Perrmo was out of the picture, he could see going back to the life of a wandering minstrel with Greta, embarking on gigs together. Lloyd had gotten tonight’s gig by setting it up a week prior with the bartender, who also owns the joint. He found a local ensemble to play and split the profits with, so they spent some time practicing well-known songs in preparation for the theft (a plan the band knew nothing about). Now he had to act, think on his toes, and spring to a decision before the entire spell went kaput. Lloyd glanced at Greta, and she nodded in response, prepared for a change-up in the song. Then he twisted the melody and slowed the pace, causing faces to light up in recognition, ready to sing along to the classic rhythm. The band fell in line, although it wasn’t a song they had prepared. It was a song that every musician could play.

Bursting forth with the lyrics for “Tap Me Another” was Greta, enthralling every patron raise their voices in unison and dance about the space. At this point, Perrmo had backed out through the swinging door, and the bartender followed with raised fists. Perrmo was no fighter. He attempted to dodge more than retaliate, unsure of what to do next. Greta then got to the second verse of the song, which is done as an instructed dance, and often improvised. “Move away from those chairs, take your very last chance, no need to put on airs, step in line for a dance,” Greta belted out harmoniously, in a soothing tone, enrapturing the patrons into a row. “Let’s all come together, not a one facing back, don’t bother looking ‘round, push that chair from the pack.”

The bar owner was rapidly punching, frustrated, missing his mark on every swing as Perrmo continued to bob and weave around the room. Then suddenly, Perrmo’s foot got snagged, and he plummeted to the floor. The bartender had stuck his leg out at the last second; he smartened up, studying the thief’s evasions as he jabbed. Perrmo’s hands barely got out in time to protect his face from smashing against the stone tiles. The bartender swung his long leg back, ready to kick Perrmo directly in his spine, when twenty chairs came hurtling towards them from the enchanted, dancing drunkards. The owner received the brunt of the barrage: assaulted by the flying furniture (the very chairs he had furnished the room with). The wooden seats battered him about, crashing into his shins, knees, and backbone before toppling over one another in such force that they caused him to crumble to the ground, buried in chairs. The man was now unconscious. Lloyd and Greta’s song had saved Perrmo, who was curled into a ball, protecting his head. Upon inspection, Perrmo decided that since the owner was out of commission, and he’d seen his face, he might as well make the most of the moment and loot the man’s body. He found some coins, matches, and a small chunk of cheese wrapped in a thin cloth. Perrmo made sure to make eye contact with his companions, saluted them with a wave, and took off out the front door with the rare one-of-a-kind necklace in his possession.

Jesse is the founder of Pied Raven Games, and his first card game, Hibernation, won Best Family Game in 2018. He currently has a book in the process about game design. The book, titled Make Your Own Board Game, will be available 10/2021.