BA
by Brian Anonymous about a month ago in review

If you've already seen Chris Rock: Tambourine you might not be missing too much. 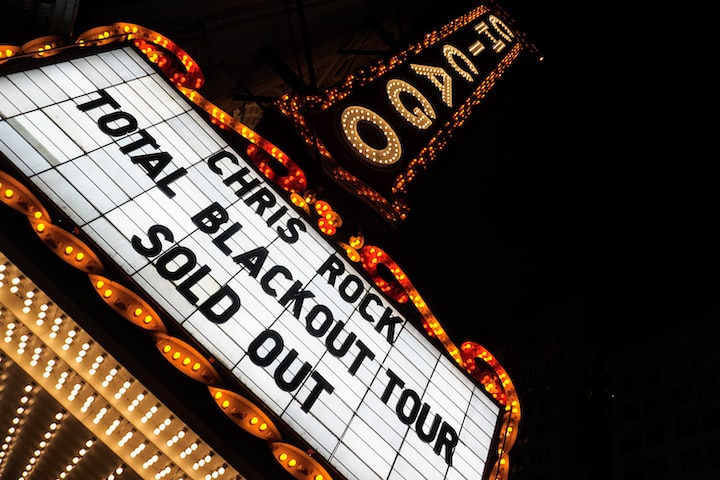 Chris Rock: Total Blackout came out as a new 2021 Netflix exclusive standup special. The thing is, it's not necessarily a new standup special. It's actually an extended version of Chris Rock: Tambourine. That special came out back in 2018. I could have swore I reviewed that special but it was probably before I came onto Vocal Media. It had a lot of insightful thoughts that are quite controversial in today's climate.

This special starts out right away with some new footage. The funny thing is that it's with footage from the Jimmy Fallon show. Chris is on Jimmy's show telling him about what happened when he was at the Obama's going away party at the White House. Admittingly it's a very interesting story but technically it seemed a little out of place with the rest of the special. Yes Chris does talk a lot about race relations and the Obama signified a very momentous era in American lives but it still felt out of place.

This transitions to his Tambourine special and I think it may have been a cut scene because I don't totally remember it last time I saw it. He goes into this rant about equality and the police. Some of it I remember but some of it seemed to be new. The subject matter is still pertinent today as it was years ago. You have to understand that he exaggerates his jokes and that's what makes them funny. Some people may misinterpret some of his jokes as him literally meaning everything he says.

As a successful comic his point of view has changed dramatically from his older standup specials. He is no longer making jokes about saving money at fast food places but he does still have some of those habits in this special which was nice to see. Much like Dave Chappelle and Kevin Hart, Chris now has money and living large. His jokes now reflect this. It's hilarious how all of them always make fun of their own hypocrisies of wanting to do good for the poor but not wanting to lose their own fortunes. I think we can all relate because honestly if we came upon tons of money we'd probably behave the same sort of way.

I felt that this special was an honest interpretation of what is on Chris' mind at the time. He doesn't seem to hold much back when he's on stage. There are a ton of off colored subject matters that he talks about that are contrast to popular norms. For example he talks about how it bullies should be in schools and that we shouldn't be keeping them away from kids. He argues that they allow kids to learn about the real world and learn ways to deal with them rather than brush them under the rug. There is some truth to this when he makes several examples of the changes he sees in America.

The special also goes pretty deep into Chris' personal life. This is a common thing in stand up specials, especially longer specials such as this one. He talks about his devastating divorce and the ordeals that he had to go through. The difference is that he understands that he was the one that had ruined his marriage in the first place. Yes he does have a lot of complaints about his wife and the proceedings of his divorce but ultimately he understood it was his fault. You don't really see many people explaining things like he does in this special because he goes deep into what was wrong with him.

I've grown up listening to Chris and it's particularly interesting how he is able to integrate much of his personal life into his sets so seamlessly. There were some moments where I was shocked that he went that far but it never felt totally out of place. He's a great storyteller but I forgot he has some of those old tendencies to repeat phrases to keep thoughts in our heads for him to throw in the punchline. I thought this was a fad that disappeared in the 90's and 2000's. It kind of reminded me of earlier Bernie Mac delivery.

If you've already seen Tambourine I think you'll be very familiar with pretty much 90% of the show. There's very little in this extended special that you probably can't find on YouTube. So I wouldn't recommend going to see it again unless you really liked the Tambourine special in the first place. Even the ending had a story told by Arsenio Hall that was very interesting but that's not really a Chris Rock story. Again I was thinking to myself why is this added to this special? It's nice to see and entertaining but it doesn't match the tone of the rest of the show.

Overall, I still had a good time watching this and it was a nice refresher of his material in Tambourine. Chris seems to be maturing as a comedian just as Dave Chappelle has matured as a comedian. They're storytellers that explain the inequalities in our daily lives. They find the juxtapositions where we don't normally find them. I will have to give this special an 8 out of 10 for a first time viewer. If you've already seen the Tambourine special. I would say you can pass on this.

I have tons of opinions that change constantly. I watch a lot of movies and play video games.