RJ
by Roy Jones 17 days ago in comics

With the rise of the internet, many comic book companies have had to step up their game to bring readers a superior product. Fans can now find most of their favorite books online to read at their leisure and for free. With websites such as 'Read Comics Online' the industry is bound to take a massive hit financially. Fans can now literally read entire series from their computer or laptop without financial detriment. Yet it was a great comic book writer/artist who once likened holding a comic book similar to holding a pair of boobs; he stated 'they're always nice to look at but it's always good to feel one in your hands.'

Such a quote came from the late Stan Lee who was instrumental in the rise of Marvel comics. No truer statement has been made which is why I encourage you to buy this iconic crossover brought to you by IDW Comics. I'm not familiar with the G.I Joe comic book series but am well aware it's been made into a successful series of movies. IDW seemed to have picked up the license for many a franchise and this acquisition is certainly a positive one. Basically it's like a good army (G.I Joes) fighting a bad army (Cobra) in action filled panels of military action. That's all good in my book but when you add the popular spy series 'Danger Girl' in five cross over issues; my tiny head almost exploded. Danger Girl is like your Charlie's Angel's of the comic book world. They're basically a sexy group of female spies who specialise in espionage. 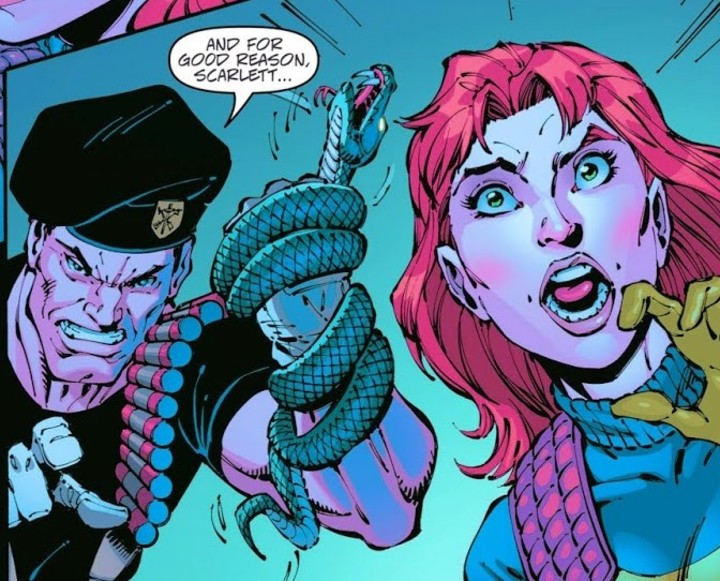 The panels in this book are excellently drawn.

Now Danger Girl I have followed for a while and have really enjoyed. The series was made by artist J. Scott Campbell who put the iconic spy trio on ice for a while when he produced 'Gen 13' for Wildstorm. I was gutted when this happened as it felt like the seven issue mini series just wasn't to please fans. Campbell seemed to have a style of his own where you could usually distinguish between heroes and villains pretty easily. For example you could always spot a female heroine by her cute nose and a villain by her pointy one. The style worked for me and a lot of other readers who picked up the books but we were left in limbo. 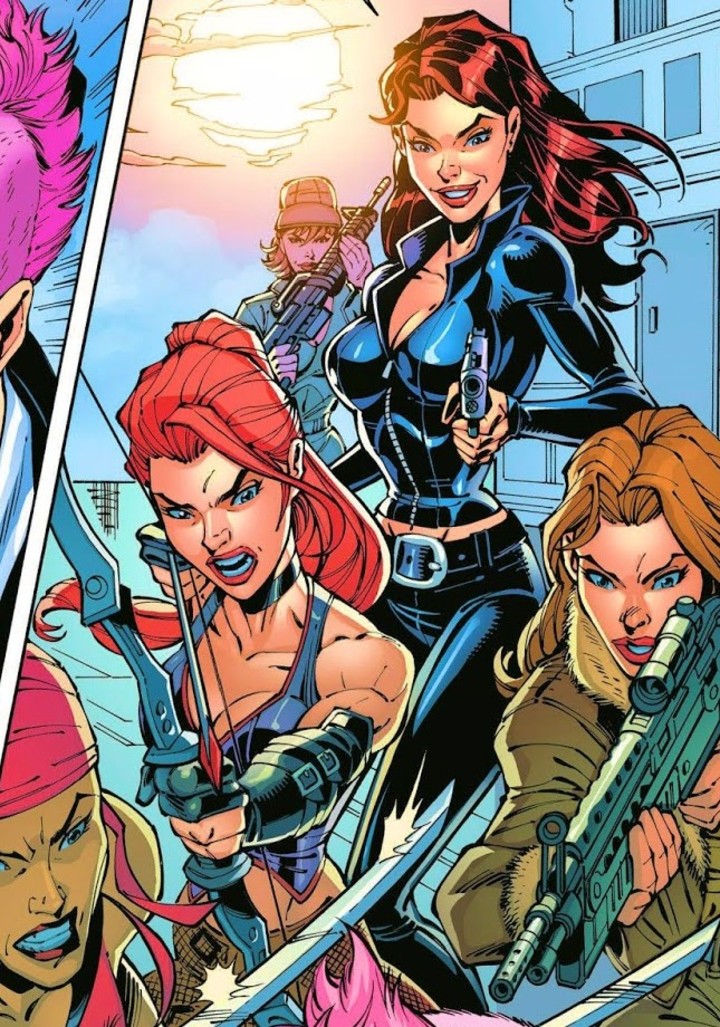 The G.I Joe girls here with Sydney Savage are just as dangerous.

The Danger Girl follow ups weren't great either without Campbell; I remember being underwhelmed by the manga inspired Danger Girl: Kamikaze. This book however although not drawn by Campbell seems to mimic his artwork style pretty well. It's been drawn by John Royle and the story written by Andy Hartnell. The main stay characters in the Danger Girl series are Archological expert Abby Chase and bullwhip specialist Sydney Savage. 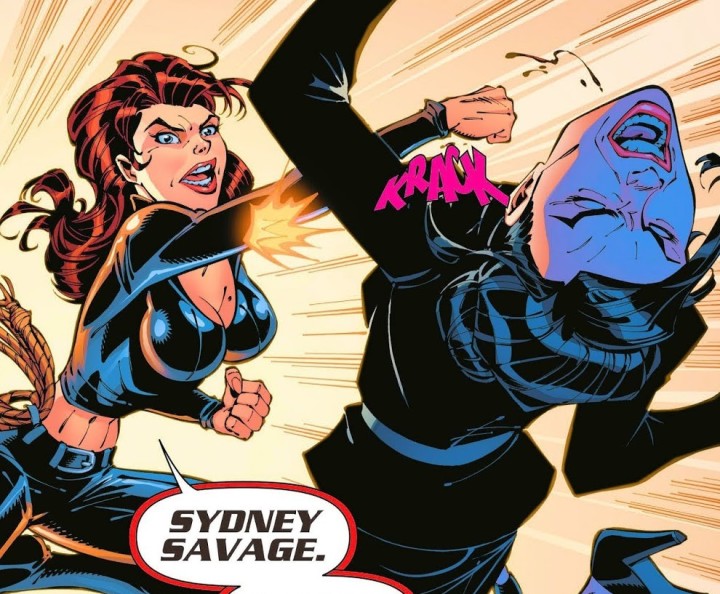 Other Danger Girls have came and gone throughout their operations through death, betrayal and espionage!

It's really compelling stuff and IDW did the right thing with this crossover. G.I Joe seems to be a military inspired comic book series which is just as exciting as Danger Girl. It's a little hard to follow the characters if this is your first time seeing them (it's literally an army of characters.)

Yet they seem to have gigantic resources; their own base being on an aircraft carrier. You'd have to pick up earlier issues to get the full background story but basically one of their operations crosses with the Danger Girl spy unit. 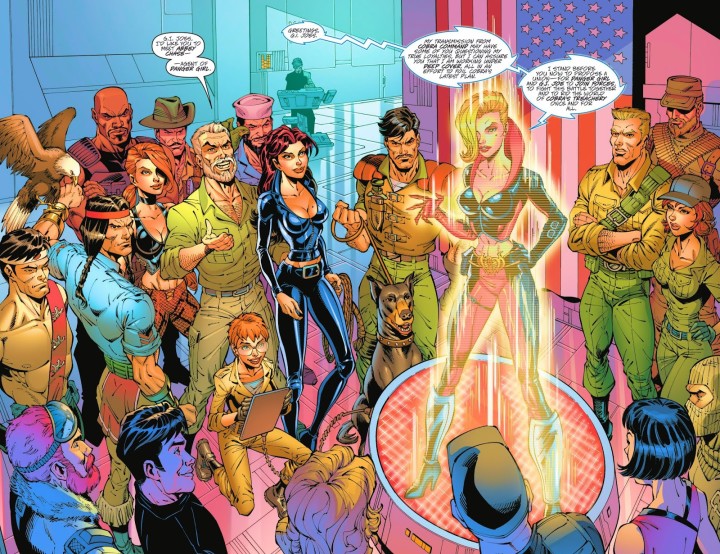 The cast is massive and a little hard to follow at times.

It's a nice combination of the 'infantry meets the spies' and expect some exciting action panels as they try to take down the evil Cobra. The bad guys seem just as well equipped as the good guys with gigantic hidden bases and soldiers who can cloak their identity. The villain who stuck out for me was the sexy Baroness (for obvious reasons) who seems to be one of the leaders of Cobra. 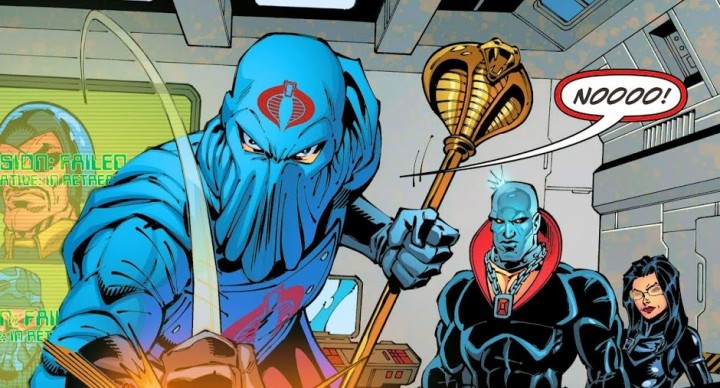 Cobra... they have anger issues.

There's enough espionage and military stuff here to appease any action comic fan. Don't expect novel like story telling but the narrative isn't too ridiculous. It's mainly action set pieces with some spying bits in between but expect 'Mission Impossible' like panels. The armed units jump on to moving trains, get left behind enemy lines and some even get captured. It's compelling stuff spread over five wonderfully drawn issues. My verdict is I give it 4 out of 5; definitely worth a buy for Danger Girl fans but the characters are hard to follow at times.