by Brian Gracey 2 months ago in table top 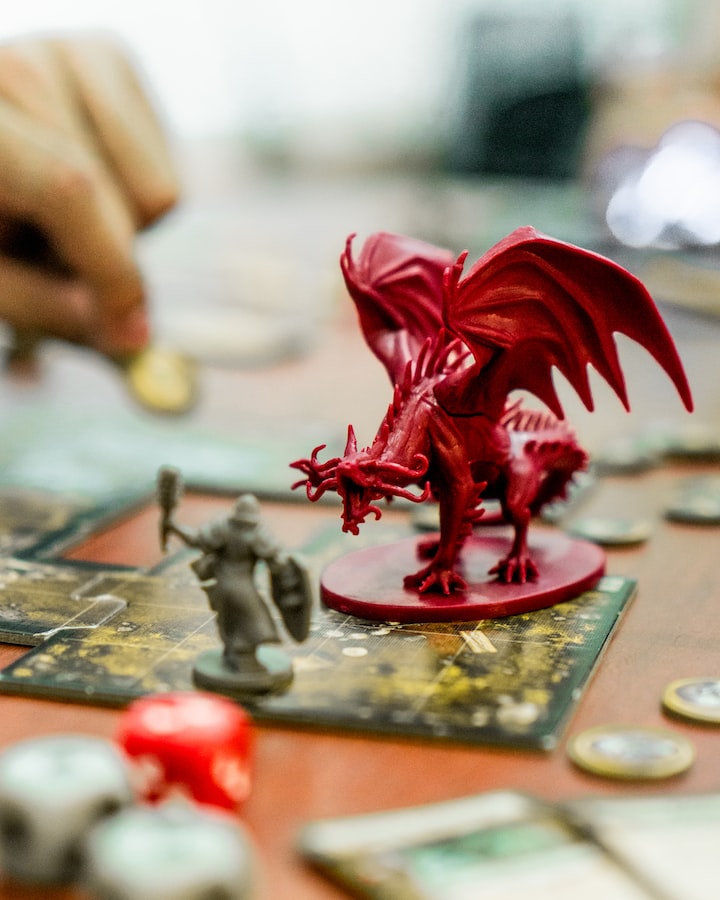 Photo by Clint Bustrillos on Unsplash

I create worlds. Bold statement I know, but very true. I paint mountains and rivers onto the landscape. I grow forests and savannas in the spaces between. I raise towns and cities, and I populate them with folk of all kinds. And I dig dungeons, placing traps and hazards for any self proclaimed hero that might happen along. I am a Dungeon Master, a Games Master, a Storyteller, and many other names describing the same thing. I play tabletop roleplaying games. I collect them. I even design them, though I’ll admit that I haven’t publicly published any as of yet. I am a gamer, and that is my passion.

I first got into roleplaying when I was maybe 10 or 11 years old, in the mid eighties, when on a trip to visit my grandparents in Colorado we stopped in a small mountain town that I’ve forgotten the name of and walked the main street. In one store I remember walking down the toy aisle, looking for something that my mom and stepdad would purchase for me, and amidst all the diecast robots and plastic muscle men there were two stacks of boxes that drew my attention.

One box, roughly the dimensions of a hardcover textbook, was red with white title text and the picture of a dragon rearing back from a few stalwart heroes boldly splashed upon the front cover. The title? You guessed it, Dungeons & Dragons. It was five dollars, which is half of the tenner that I was told I had to alot to toys. The other box, of similar size, I can’t describe quite as well honestly (I no longer own it, but I do still own the Red Box) but I remember it being black with bold, angled red text over, I think, some kind of car chase. It was a little game called Top Secret S.I. and it was also marked at five dollars.

My parents bought them both for me, and that purchase, and the days after sitting in my grandparents house devouring the rules and drawing maps and making characters, has molded my life. I haven’t counted, though I really should, but I would guess that my current collection of print rpgs is nearing 200 separate games, and the number of books is larger still as I have several supplements for many of those games and the entire collection has gone with me for my entire life as I have moved from one place to another, even as it continues to grow. My digital collection likely doubles that number, but thankfully is a lot lighter.

And I have read them all. Every. Single. Page.

Games are my meditation. When I’m bored and looking for something to entertain, I grab a core book (the main rulebook of a game). When I’m on the couch watching YouTube or during load screens in whatever video game I’m playing, I pull up a PDF of an adventure on my phone. I am always reading, consuming, planning, and creating games. Even when I am writing fiction or poetry I am doing it from a standpoint of game design, character creation and narrative guidance.

Games are my collectibles. I love owning them, and surprising people with encyclopedic and obscure knowledge when they ask about games other than D&D. I love engaging with them, as with few exceptions the writing is fun, and engaging, and interesting. The art spans a spectrum from lovingly, sometimes ugly, hand drawn amateur's work to highly detailed and designed set pieces. And the content, the meat, of these games, the systems, the setting information, are a goldmine of ideas and wonder for any that delve into them.

Is it an addiction? Probably, and yet even in the 1980’s during the Satanic Panic my mother was not concerned for me (thankfully, considering how much bunk that all was). I remember only one moment when I was working on a dungeon at my Missourian grandparent’s house, and my grandmother started asking me about what I was doing. I gleefully explained to her, and while I certainly don’t remember exactly what I said, I do recall her look of confusion and likely concern (though that didn’t register to preteen me) as I described fighters and wizards and thieves plundering the dungeon of the undead lich king and on and on (I can roll for a while when I start gushing). My mother told me years later that my grandmother had called her to complain about “Satan’s Game” and my mom apparently told her “He’s writing, he’s drawing, he’s thinking, he’s planning, he’s doing math, and he enjoys it. What is the problem?” And that was the end of it. I was lucky, I know.

In grade school and early high school I played Advanced Dungeons & Dragons with a few neighborhood friends, our games not much more than making characters, opening a Monstrous Manual to a random monster, fighting it, and taking its treasure. Mid to late high school to early college I was playing Vampire the Masquerade and Werewolf the Apocalypse with other edgy trench coat wearing teens, ruling the night and delving into the questions of personal morality and consensual reality. In late college I was living in a townhouse with half of my home group, and was playing Dungeons & Dragons 3rd Edition every Saturday, often from noon until 8:00 or 10:00 pm (and on occasion later), a fun, epic, tongue in cheek, beer and pretzels game that lasted for years. And those were just the steady games. Shadowrun, Deadlands, Traveller, Call of Cthulhu, I could name drop the games I’ve played for several paragraphs, and that would not come close to encapsulating the games I own and have read, as sadly I have not played them all.

Nowadays with my friends living in different cities and states we still play something weekly, but it might not always be an rpg, and it is always online. But I keep buying and reading games. I keep creating stories and characters on the off chance that I will use them. And I still dream of doing what I have wanted to do since I knew that it existed.

I still dream of owning and operating a games store. I worked at one for several years on and off in my late teens and early twenties (and in fact was working at one when I met my wife who was then a graduate student, and I am so glad she gave this slacker gamer a chance). The shop that I worked at was a chain, and also sold comics (which I enjoyed but knew nothing about), but the important thing to me was the roleplaying section (and the fact that I could buy games at cost). I was kind of the tabletop guru at the store, just as likely to talk about dice mechanics and probabilities as setting and style. I have friends and former customers who still contact me today to see if I am up to date on systems and editions coming out (I am) and see what my opinions or expectations are.

But ever since those golden days of selling games, playing games, demoing games I have desired nothing so much as owning my own store, stocking it with my favorite choices and a little bit of everything else for others who have different tastes, and to working in an environment where just beyond a divider or in the next room people are playing games, telling stories, and having fun. I miss the “shop talk” of systems and substance.

The thing I remember the most about working in the shop is that more than any other job I had done it never felt like work. Sure cleaning and straightening the store was kind of work-like, but I did that kind of thing at home as well so not much of a bother. But speaking to customers, finding out what they like, helping them make connections with other titles or systems (which yes, was partially to upsell them, but also because I felt they would enjoy it).

While the lingering pandemic has dulled my spirits somewhat regarding opening and operating a games store with an open free play area, I do still hope at some point that I might make my dream a reality. Because in the end, to me, there is nothing more pleasurable than sitting around a table with a group of people guiding them through a story and a world that I have created while they represent characters that they have created and invested in, and the meeting of those create a narrative that only exists for us and with us, in that moment. Roleplaying is an escape, it is creation, and it is a mindset that has suffused every part of my life in only positive ways.

Receive stories by Brian Gracey in your feed
Brian Gracey
Read next: Pitch Ya Game Round 2