The Thrill of the Grab

by Grace Linn 2 months ago in arcade

Taking a look at crane games 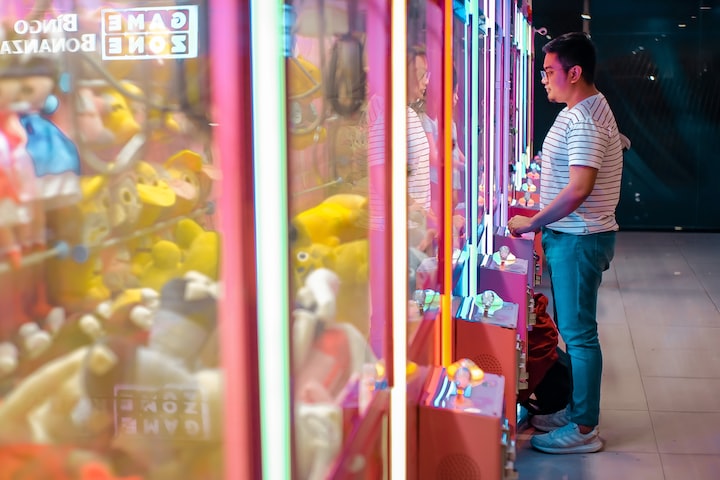 Photo by Edsel Pingol on Unsplash

You’ve checked all of your angles, you’ve positioned the claw directly over that cheap stuffed animal, and as your metal friend dives to retrieve it, you’re filled with hope. But then, confusion. The claw picked up the item perfectly, but its prongs didn’t seem to even try grasping. As your toy dinosaur soars to the top, he immediately falls below. You throw your head back and groan in agony. How could something so fun and appealing be so rigged? That my friends, is the epitome of the classic claw machine.

They didn’t always start out with stuffed animals and metal claws. Their earliest predecessors began somewhere in the beginning of the 20th century, although some historians believed they first appeared in the 1890s!

Our first account in the history of the beloved skill crane takes us to around 1926 when the first Erie Digger was mass-produced. It was named after the equipment used to build the Erie Canal. It allowed for control of a steam shovel by a wheel on the front where players could then try to snatch up pieces of candy. This was right around the time of the Great Depression and so it easily attracted people for just a mere nickel. These machines didn’t require electricity to operate either, and at night people would light candles and put them inside the Erie’s glass box.

The most successful of these machines was the Miami Digger, which operated just like the Erie Digger, except with a motor. If you aimed correctly, you chanced pulling out a silver dollar from a sea of kernel corn. This was a completely new concept patented by William Bartlett in 1932. It was a very popular one, but was unfortunately short lived due to the Johnson Act which prohibited the transportation of any gambling device. At that time, it seemed the classic claw game we now know and love was over. But this was definitely an enterprise that wouldn’t go up in smoke. By 1973, the FBI had pretty much given up on the Johnson Act. This provided relief for carnival workers and finally gave way to what we see crowding arcades and various shopping centers today.

Companies like Sega and Taito had been making trolley-style boxes as early as the 60s, giving out prizes such as watches to soldiers on military bases. Once these machines reached the U.S. they attracted the eyes of plush toy vendors and began popping up in places like Pizza Hut and Chuck E. Cheese throughout the 1980s. These machines only operated with a forward and right button, making it much harder to snatch a win.

So why exactly is it near impossible to procure that plushie? Well, you can thank corporate greed for that one. Nearly every crane game that you see today is programmable. Most crane games have command module settings which allow the owner to tamper with: odds of winning, the PSI (pound-force per square inch) of the claw, and the cost/ accepted money. For example typically in California there is a 1/12 chance, and in Nevada there is a 1/15 chance. For the PSI of the claw, that can be altered depending on how much a toy requires to be picked up. Most claws are 5-8 PSI while items require 10-13 PSI to be picked up. This setting can be altered by tightening or loosening the springs on the claw. If you were to play a machine in California, 11/12 times the claw will only apply 4-6 PSI which is just enough to loosen an item or barely pick it up. Then 1/12 times the claw will apply 9-11 PSI and even then there is still a chance that will not work as you have to still position the claw appropriately. That’s really the only concept of the crane game that can be considered skill. The rest unfortunately is up to chance. You never know when that 1/12 statistic will occur as it’s completely randomized.

Another aspect that tampers with these win/lose statistics is money. Let’s say a crane game takes 50 cents to play. Then let’s say that same game is filled with prizes averaging at $6 in cost. If a vendor wants to make 50% profit, it would take $9 spent (18 tries) to get that profit. Do you really want to try 18 times for an item you could easily buy off of the shelf or online for less money? Overall it really does come down to chance when playing the classic machine, with almost no emphasis on skill.

So how can you beat these things without losing your damn mind? One of the first things I do when scoping out claw machines is how the prizes are positioned. If they are all jam packed in there, the chances of being able to pry one out are slim to none. The second thing I try to do is guess the value of what’s inside. If they are cheap stuffed animals, they’re going to be easier to win than electronic devices like Beats or IPods. A store has to make its profit somehow. Another aspect I look at is how often the machine is used. For example, when you go to the casino, and you see a slot machine that hasn’t been used in a while, there’s a good chance that you will do really well on it the first handful of times because that’s how you get suckered into playing it repeatedly. If I see people constantly winning prizes out of a crane game, I’m probably going to try and stay away from it. Then when I find a machine that looks like a good prospect, I insert my money and begin.

Some of the games I’ve played do not begin counting down the timer until some sort of mechanical movement has occurred. If this is the case, I take my time mapping out exactly which prize I am going for and how I’m going to get there before pressing any buttons. I try going for prizes that are laying flat and free from obstruction, or I go for prizes that have an easy access point such as a bear with a round head sticking up. If a timer begins a countdown immediately, I just map out everything before handing the machine my dollars. The final thing I do (even though I am really bad at it) is set myself a limit of how much I am willing to spend. It is too easy to get hooked onto the possibility of winning something especially when it seems like you were this close every single time you played. But you will save yourself grief and cash by just trying to secure that prize by other means, and not through a gambling device.

That being said, I have enjoyed crane games throughout my entire life. Every time my parents and I went shopping while I was a kid, I would always beg to play these. And sometimes my mother would reluctantly hand me a dollar, knowing I would fall victim to its spell.