The Nintendo64 and Goldeneye

by Paul Douglas 3 months ago in nintendo

A Gaming Match Made In Heaven 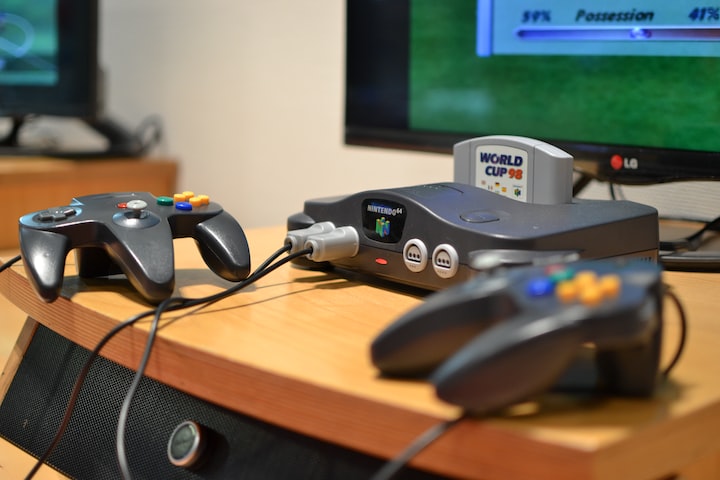 Photo by Pat Moin on Unsplash

In the winter of 1998, I was at college when one of my flatmates brought his Nintendo 64 console home. Up to this point, I had been playing the PlayStation and had always thought of Nintendo consoles as ‘kids machines.’ In my mind, the PlayStation was more age-appropriate. My outlook suddenly changed, however, the moment I played GoldenEye 007.

Nintendo 64 (N64) launched in Europe in March 1997 to great acclaim. Its competitors at the time — the PlayStation and Sega Saturn — each had their exclusive titles. As always, though, Nintendo ploughed its own furrow with its distinctive games. Their exclusives were as individual as their gaming ethos.

The ever-popular Nintendo titles Super Mario 64, The Legend of Zelda: Ocarina of Time, and Mario Kart were and still are brilliant games. However, my personal favourite and the one that drastically changed how I viewed the N64 was GoldenEye 007.

GoldenEye 007 was a game based on the 1995 James Bond movie bearing the same title. Developed by Rare and exclusive for the N64, it gave players the chance to be 007 themselves.

The GoldenEye movie is infamous as was (and still is) James Bond himself. The movie starred my favourite Bond: Pierce Brosnan. Set in the post-Cold War Era Soviet Union, the film featured incredible actors such as Robbie Coltrane as the Russian gangster Valentin Zhukovsky.

The game is just as atmospheric and compelling as the movie, having a great storyline and has us interacting with characters we know well from the James Bond franchise and movie. The game had great character modelling for the time. It became a real treat to come across Coltrane’s character in the game, immediately identifiable and complete with his Russian accent. It was like diving into the Bond world and becoming 007 myself.

That is when I found my view of the N64 taking a drastic turn.

The story arc followed the eponymous spy in his mission to prevent a criminal and ex-00 agent, Alec Trevelyan 006, from destroying London with the GoldenEye super satellite. This was as far from the staple Nintendo Mario Bros fare as you could get.

Even now, too many years later to comfortably think about, I remember sitting around the little 14” TV with my friends playing GoldenEye. For my first term at college, it was the only cartridge we used on the N64. It was the only game we needed. That’s just how engaging and replayable the game was.

This was also the first first-person shooter (FPS) game I had ever played, and I was immediately fascinated by its mechanics. Bond received his mission briefs from ‘M’ and new gadgets from ‘Q’. Amongst the weapons available were Bond’s silenced PP7, a sniper rifle, timed mines, hand grenades, and many more. This kept the action interesting, fresh and exciting in how you approach levels and enemies throughout the game.

GoldenEye even contained stealth elements, great FPS mechanics, and a brilliant main story campaign. I’ll admit that even the split-screen deathmatch multiplayer mode was another favourite, my friends and I crowding around our little TV.

This game changed the way I viewed the N64, but most importantly, it encouraged me to give this console a chance. The N64 was a great console with superb graphics. The console itself was fun and even came in different, bright colours. The translucent orange has to be my favorite. Inside and outside, the N64 was an appealing piece of hardware.

The N64 would go on to sell over 32 million units before being discontinued in 2002. As for GoldenEye 007, it was one of the N64’s best-selling games and would go on to win numerous awards. This game is still remembered for its influence on future FPS games. It helped to popularise a genre that still enjoys massive success today.

The N64 has become one of my favourite game consoles thanks to GoldenEye 007. This game truly revolutionized FPS and my view on the N64 in general. This game helped me fall in love with FPS games, which I have subsequently played on many platforms down the years.

This game helped me give other N64 titles a chance. The Legend of Zelda is an evergreen favourite of mine as is Mario Kart. GoldenEye, however, will always remain my number one.

Recently I had the opportunity to play GoldenEye 007 once again and I grabbed the opportunity with both hands. I have to say I loved every minute spent reacquainting myself with Bond on the N64. Despite the years that have passed, the game still proves to be my favorite gaming experience and opened the door to many more.

Receive stories by Paul Douglas in your feed
Paul Douglas
Read next: Video Games Are NOT Responsible!