The Evolution of a Female Gamer

by Jen Sullivan 2 months ago in women
Report Story

Growing Up in a Boy's World 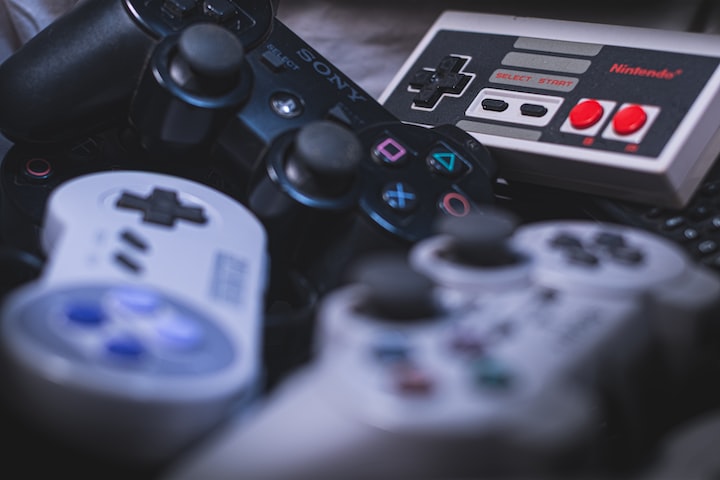 When I was a kid, I was one of the very few girls who played video games. It wasn’t something that girls did back in the 1980s. Little girls were supposed to play with Barbies and baby dolls. They were supposed to play dress up and pretend to be wives and mothers, I guess in preparation for their adult lives. While I did play with my Barbies on occasion, usually with my cousins, I didn’t pretend Barbie was dating Ken or was always dressing up for parties. Barbie had real issues to deal with in her life. My Ken was often a murderer and Barbie had to solve the crime before the other Barbies were victims. Sometimes Barbie’s life was normal, but most of the time I preferred to play with Star Wars action figures, Legos, and Hot Wheels because there was more action to them. As the gaming industry began to develop, I started to shift to more video games. I was unknowingly laying the foundations of becoming a gamer.

I grew up with two younger brothers and my childhood best friend was a boy named Marc who lived nearby. Marc and I spent a lot of time playing with Star Wars action figures, trading Garbage Pail Kid cards, and watching movies like Pee-Wee’s Big Adventure and, one of my favorites, The Goonies. When we weren’t playing outside, we were probably playing video games. In the early days, we had a ColecoVision with an Atari attachment. It was often a struggle to get games to work, and we didn’t have a big selection, but we enjoyed it when we could.

Years later, after the NES was release, Marc, my two brothers, and I would spend hours with video games, usually Mario or Zelda. Either we were playing or we were watching someone else play, cheering (or taunting) from the sidelines. Marc had a large game library and we would often borrow games from him. We still spent a lot of time outside, but on rainy days we had the NES to keep us entertained. After my parents divorced, I didn’t get to see Marc outside of school, and we eventually drifted apart as I stayed a gamer and he sold his video games to buy exercise equipment. I always joked that he needed to buff up to beat me in a fight. He always just laughed.

As the years went by, my brothers and I keep up with the new consoles for a while. When Sony first came out with their PlayStation, we didn’t buy one because we were loyal to Nintendo and Sega: I was the loyal Nintendo fan and my brother Dave was loyal to Sega. My brother Dan was in the middle, though he leaned more toward Nintendo because of Donkey Kong Country and Mario Kart. Years later, my faith in Nintendo was truly tested when they released the Virtual Boy. I had no interest in that “gimmick” and prepared for Nintendo to disappear from the console market. Fortunately, they recovered quickly and exceeded my expectations in the years following the failed Virtual Boy.

As time went on, we paid more attention to games than loyalty. We eventually bought a PlayStation after a friend of the family kept showing us his game collection, selling us on it when we saw Resident Evil and Super Puzzle Fighter II Turbo. My Sega-loving brother insisted we get a Sega Saturn, and though it wasn’t the greatest system, I did enjoy hours of Theme Park and NiGHTS Into Dreams. I later left the Theme Park series for Roller Coaster Tycoon, but NiGHTS would forever remain among my favorite games. We entered late into the Xbox world, once again avoiding the newcomer in the console wars. That eventually led to the old-school Halo: CE LAN parties. Good times.

When you’ve been gaming as long as I have, it’s always sad when things come to an end. On September 9, 1999, we went to pick up our Sega Dreamcast. We didn’t know then that it would be the last system Sega would ever make. At that time, the Xbox wasn’t out yet and Nintendo’s N64 era was coming to an end. We had a lot of fun with our Dreamcast, but it just couldn’t compete with the new systems about to release. I still have the old Dreamcast somewhere, if not just for nostalgia.

To me, when you consider all factors, the best game console so far is the N64. We had such a great library of games for that system and it was the first time the three of us could play together. The hours we spent playing Mario Kart 64 and GoldenEye 007… I actually still have my blue N64 and most of our games — our original N64 and the rest of the games are with one of my brothers. I did love the GameCube very much, but the intro to 3D environments on the N64 was spectacular at the time, and nothing can change that. Don’t get me wrong — I love my PS4 and sometimes get the overwhelming urge to play Halo on my Xbox One, it just isn’t as awe inspiring as the days of the N64.

As I said before, in the 1980s, little girls weren’t supposed to be playing video games. Gaming was mainly viewed as a “boy” activity and was clearly targeted toward males of varying ages. I was always a tomboy, as we called people like me back then, and I never cared what anyone thought about it. I was raised to be tough and to compete with two younger brothers, including playing backyard football with them and sharing in their interests to keep them from getting into trouble.

As online gaming became more prevalent in homes, that was when I first started to become aware that I was a girl in a boy’s world. I had played video games with my brothers’ friends without any question as to why this “girl” was playing. I was good and they knew it. Rarely was I ever seen as some girl who didn’t belong in the group, whether we were playing video games or playing some sort of outdoor war game. Whenever one of my brothers’ friends thought that I was just some girl, they soon realized that I was just as tough as my brothers and could hold my own. That was the impression I had of the women in my dad’s family: strong, both mentally and physically, and independent of their husbands.

It was when online gaming became big that I was reminded that I was not a boy. Other players would sometimes assume I sucked just by the feminine tone of my voice. I rarely spoke when I played online without my brothers, usually not even plugging in my headset. Anyone could have guessed I was a female from my old gamertag, but most people back then just assumed fellow online players were males. I loved playing Halo 2 online, I just didn’t love the assumption that immediately followed my voice — that I was horrible at the game, which I was not. Put me on one of my favorite maps with shotguns only and I would kickass.

Aside from the male players who just assumed all “girls” just weren’t good at any game, there were the ones who would feel the need to immediately shout “you’re a girl?!” as soon as they realized this fact. Most of those players sounded like pre-teen boys, their voices sometimes higher than my own. Some players would get just as irritated, insisting that we all just play the game and have fun rather than obsess about a female gamer. Still, the annoyances were enough to keep me off my mic back in those days.

I am not one of those female gamers who likes to complain about how much games are geared more toward men. I understand the reasoning and the strategy — it’s business and marketing, which I understand well. While female gamers are growing in number, and I mean REAL gamers, not players of those mobile app “games” you play while you’re in the bathroom, the video game market seems to be still predominantly men. And it makes sense considering my generation and its lack of girl gamers back then — not a lot of people convert later in life when they are busy with work and kids. However, the gaming community is more accepting of women gamers now. From online players to gaming news writers, women are in the gaming world, and we are increasing in number. And I absolutely love that we can finally choose to play as male or female characters. Actually, so does my husband.

As for me, over time I started to restrict my online presence to those I either knew or my online friends knew. While the sexism is far less than it was years ago, I just don’t enjoy playing with people who do nothing else but play the same game and insult anyone who isn’t as good as they are. We have all dealt with them — the jerk who thinks that because you came into the game later, you suck and shouldn’t be playing. The problem with that attitude is simple: if game makers don’t continue to sell the game, they will quickly move on to another game, abandoning any future updates or patches. We are all there to play the same game, so why attack someone who didn’t buy it on day one? Or who has limited time between work and family?

Today, I mostly only play with people I know, or people my husband has known for a while. I have a very small friends list on my PS4, and even smaller on my Xbox One since I don’t bother with online gaming for it. I do actually play online more than I used to, especially after the release of Red Dead Online with Red Dead Redemption II, and I find it is much more enjoyable to play with people you know versus playing with unpredictable random players. That doesn’t mean I won’t play with a new player, but I am very hesitant to accept someone new into our group because of past issues. That said, I am not the type who will go out of the way to intimidate a low-level player. If I see you in RDO and you are rank 10, I’m watching you for aggression since you’re still new, so I’ll tip my hat to you and ride off to continue on my way. Just like any good cowgirl would do.

This article was originally posted as a two-part blog on Addicted Geeks.

I am a gamer, a geek, and a gardener, among many things. I enjoy writing as a way to relieve stress and to just share with others.

More stories from Jen Sullivan and writers in Gamers and other communities.