'Pokémon Go' Finally Gets PvP and Trading (After 7 Months), Here's What You Need to Know

by Matthew Bailey 2 years ago in mobile

Niantic Studios was, at one point in the last year was the biggest success story, with millions of gamers flocking to their respective app stores to download the hottest game in the history of games, Pokemon GO. We all know the story, millions of gamers flooded the servers hoping to capture their beloved Pokemon in their own backyards and the world around them.

Pokémon GO was the latest game to join the augmented reality gaming universe, and it absolutely blew up. In just over 6 months time after launching on July 6th, 2016, the mobile app had smashed the $1 billion in worldwide gross revenue, making it the fastest game to achieve that incredible mark.

Pokémon GO vaulted Niantic Studios into the limelight and fans were begging for more, and then the bubbles burst and countless players left the game in search or something new and fresh. By the end of December of 2016, daily players had dropped by 97%. That equates to going from 1.7 million players to just over 50,000, which are the numbers collected out of the UK. Yet, even with the massive decline, that hasn't stopped Niantic's CEO John Hanke from confirming some big new updates heading to Pokemon GO.

Trading and PvP is coming soon.

Hanke explained that had there not been such a massive surge of players attempting to join the overwhelmed servers, these features would likely have appeared closer to the actual launch. Yet, the team at Niantic felt that the priority was to fix the fundamentals rather than implement new features and give players a game that didn't match the vision for the games future.

Likely we will see the ability to trade happen before a PvP system is in place. Although trading will be nearly as difficult to implement as the PvP battles, considering that with trading you'd want to safeguard the game from the nastiness that is bound to happen, just imagine the Craigslist ads that are bound to pop up:

There's a lot that Niantic will have to set in place before either system is ready for the public, but they have committed to bringing both of these features to the game soon.

The Niantic team was pleased with the countless, spontaneous, user-created events because ultimately they had hoped to introduce global events that tied into various locations, much like what we, the players, created on our own.

"I'd never seen spontaneous, user-created events on that scale before" - John Hanke

In the first six months that Pokémon GO was available, there were live events popping up across the world, from the Sydney Opera House in Australia to Central Park in New York City and everywhere in between.

Players were flocking to locations all around the world in the hopes that they would find a rare #Pokemon; and it worked. New and official live events could go a long way to introducing the bulk of the 2nd Generation Pokemon and beyond.

Gym battles are getting an update. 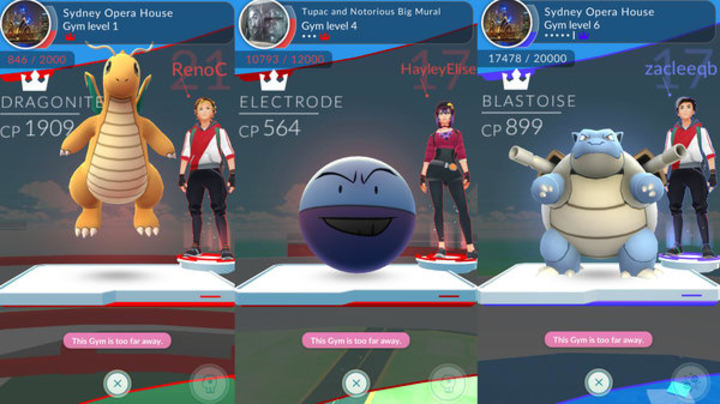 The gym system, as Hanke has agreed, is fairly "rudimentary" and not what the Niantic team had envisioned from the beginning. An upgrade is on the way and it should be closer to the turn-based system of the original handheld games. An overhaul on the Gym System would go a long way to improving on the upcoming PvP system in the works.

The speed of Pokemon GO's success, caused Niantic many problems, and it's a big reason why the Gym battle system wasn't retooled earlier, but with Hanke's belief that they have fixed the elements of the game's foundation and Gym Battles are a feature that he really wants to build into a more functional system.

Co-Operative play will be introduced.

Now, considering that we never really interact on-screen with other players in the real world, a Co-Op feature could be very interesting considering all of the other improvements that are on the way: trading, PvP and live events.

Bringing players together to find new ways to interact with the AR world is something high on Niantic's priority list. Regardless of the bans that entire countries have levied against the mobile game, Niantic believes that Pokémon GO is a game that is best played cooperatively, and they want to encourage that type of playstyle with added benefits and perks.

So, it sure looks like Niantic has some solid plans in the work, and if it's all done right there could be a solid revival of players jumping back into the frenetic pursuit to capture them all.