How to Build George Washington in 'The Pathfinder RPG'

by Neal Litherland 5 months ago in rpg

George Washington, his name reverberates in the halls of America's schools, and the man has become a legend. He was the first president, one of the primary founding fathers, and his face adorns both our money, and several of our major national landmarks. What we tend to gloss over, though, is the fact that George was a stone-cold badass. A man who preferred the sound of bullets slicing past his head to silence, and who regularly stood in front of hundreds of his enemies' guns with shoulders back and chest out, Washington was a man who led from the vanguard. If you've been looking for a solid build for a general that can lead by example, this guide should get you started.

If you're looking for more Badasses of History, you'll find other US Presidents, as well as freedom fighters like Harriet Tubman, along with the cast of Game of Thrones and several members of the Avengers on Improved Initiative's Character Conversions Page. For more gaming content, as well as to see what other strange and unusual geekery I'm up to, check out my full Vocal archive! 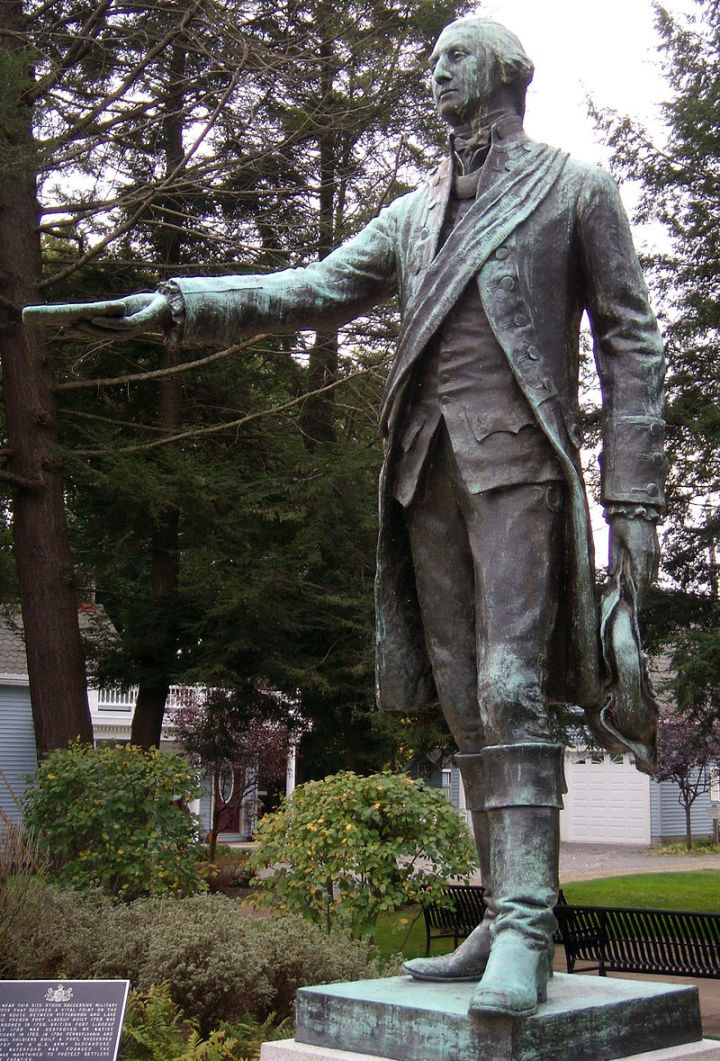 The man, and the myth.

George Washington was a man (and just a man, as far as we know) of great endurance, physical skill, and outright obscene good luck. However, when it comes to building him as a character, you need to prioritize the attributes you're going to use most often. We know from our history that he endured hours of bloody battles, as well as frigid temperatures and grueling summers. So, Constitution, Strength, and Dexterity are going to be the attributes you use most often. However, Washington was also a dedicated leader, and a symbol to his troops. Most men didn't fight for the idea that was America... they fought for him. So, a high Charisma is a necessity, followed by an iron will, and an intellect produced by military training, and higher education.

When it comes to George's traits, well, there's a huge slew of them to choose from. Perhaps the most obvious trait is Natural-Born Leader, which grants a +1 morale bonus to your cohorts, followers, and summoned creatures on Will saves against mind-affecting effects. Additionally, if you take Leadership (which you will), your Leadership score increases by +1. Another useful trait is Inspiring Rush, which grants you a +1 morale bonus to your attack and damage rolls when you make a charge once per day. Additionally, any allies who also make a charge before your next turn gain the same bonuses. Because there's nothing like a leader who rides into battle, saber high, and war cry bellowing.

More Than Just a Soldier (Class) 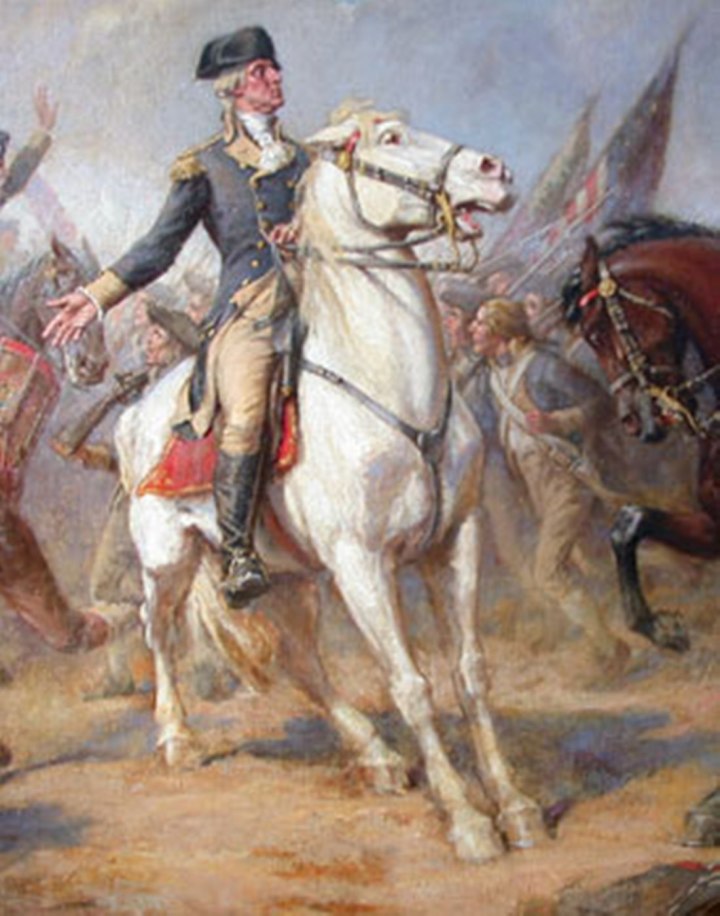 All right, lads, to horse before the enemy gets away!

There's a reason we always picture Washington on a horse; it was where he did most of his best work. While it's true he had a tendency to get his mounts shot out from under him, that never stopped him from throwing a leg over a fresh horse, totally unfazed, and heading back into the fight. So, the obvious choice for General Washington, is a cavalier. However, it's important to keep in mind that he was a leader of men, as well as a canny combatant. As such, the Daring General archetype in Ultimate Intrigue is probably the best fit.

What does it do? Well, at sixth level, it provides you with a modified version of the Leadership feat, where all your followers are warriors, and your cohort (4 levels below you) has to be a class with a full-BAB progression. What makes this ability so cool, though, is that you can designate a cohort as your groom, squire, or standard bearer in order to grant bonuses to you, and to allies and other followers.

And, you know, you end up with an army to lead, an army that would seriously benefit from some of the boosts you gain as a member of the Order of the Dragon.

However, it should also be noted that, according to Cracked, Washington was practically bulletproof. It was not uncommon for him to get down off his horse at the end of a battle with half a dozen bullet holes in his coat, but not a scratch on him. He was also known for going into terrible rages, after which he would be calm, and collected. If you want to mix in that element of America's #1 dad, then you should split your levels between Daring General, and the Invulnerable Rager barbarian archetype. This grants you damage reduction, as well as resistance to cold, which would explain how Washington survived the awful dangers of Valley Forge. Rage Powers like Renewed Vigor, Regenerative Vigor, and Renewed Vitality, along with Increased Damage Reduction, are good for marrying these concepts together.

Note that if you go barbarian/cavalier, you'll want to take Horse Master (Ultimate Combat 104). This feat lets you use your character level as your effective druid level for figuring out your mount's progression, abilities, etc.

When it comes to skills, George had quite a lot under his belt. We are operating under some mechanical restrictions, though. So you should likely focus on Diplomacy, Ride, Handle Animal, and Survival. If you have the leftover skill points, Perception is a good skill to have on hand, as well.

It should be mentioned, at this point, that it is not Washington's job to be a one-man army. He's the commander, and thus you'll have specialists for different needs.

Now, when it comes to the feats you're going to want, here are some that will serve you best. They're broken up into different groups, but you should feel free to choose the order that works best for your concept.

If you're planning on focusing on your melee charge over firearms attacks, then you should also take Power Attack (Core Rulebook 131) and Furious Focus (Advanced Player's Guide 161). These feats will allow you to deal far more damage on a charge, and ignore the negative to your power attack for that first strike.

Guns and Freedom (Gear and Story) 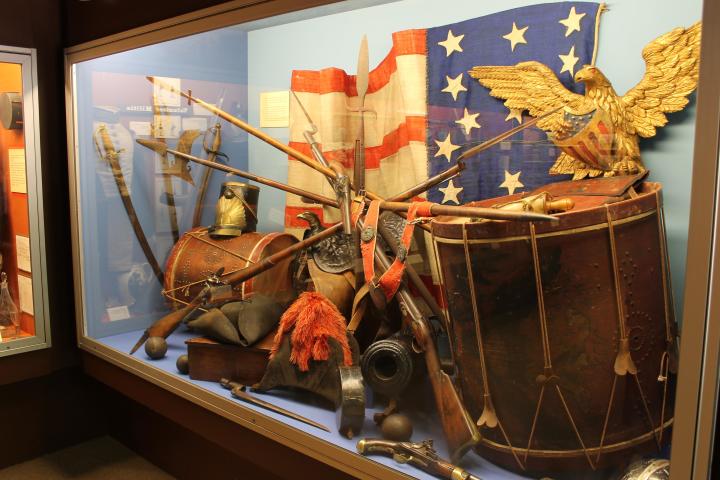 Who was he, really?

As a career soldier, and a general in charge of the continental army, Washington did have a few signature pieces of gear that he brought into the field with him. Washington had a pair of pistols made specifically for his use, and he was never without his cavalry saber. All three weapons are of masterwork, museum quality. Aside from those things, though, the general was a man who took his trade seriously, and who accomplished what needed to be done with the tools he had to hand.

As to George's story, well, that's up to you. Is he a brave freedom fighter, trying to throw off the shackles of tyranny? Or is he a warlord, looking to hold a bloody few miles of country for his own purposes? Is he the tool of a greater government, or is he the symbol of a new revolution?

That's all up to you, my friends! However, if you're looking for inspiration then you might find the following supplements useful: