The Rise and Fall and Rise Again of Shepherds’ Huts

From lambing to digital nomad in 100 years 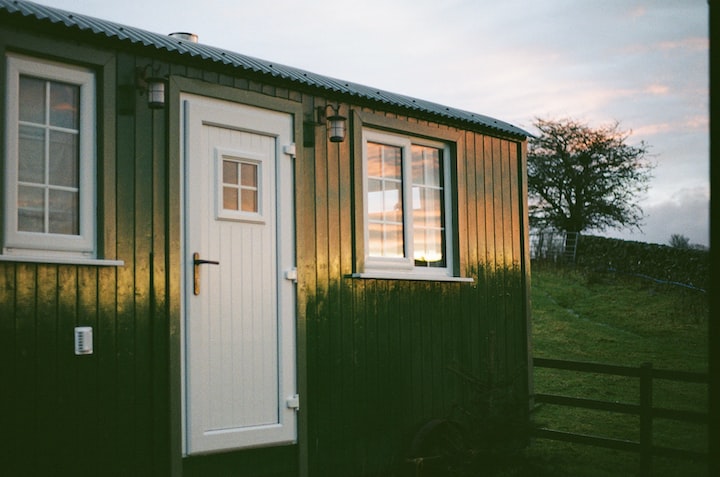 Photo by Hannah Smith on Unsplash

A century ago, many spring lambs began their lives in the warmth of a shepherd’s hut. After falling into disuse, these rustic wagons are now enjoying a new lease of life as a quiet place to work, paint or relax.

Behind a tall, tree-height hedge - no, make that more or less within the hedge, in and among the tangle of hawthorn stems and beech branches - lies a heavy-set shed, engulfed by nature.

On closer inspection, the shed turns out to have cast iron wheels and a rusty corrugated iron skin that bends into a slightly disfigured barrel roof.

Askew in a sylvan snare, derelict and deserted, the whole has a rakish air of impending collapse. Here lies a shepherd hut, left more or less on its last journey, overtaken by 70 years or so of marking time.

In the early 20th-century, this hut would have cost the farmer a figure equivalent to around half a year’s wages for the shepherd who would use it. If he bought its equivalent now, it could easily cost more than £20,000, because this humble vehicle has acquired a certain farmhouse chic.

Like gingham tablecloths and Cornish Ware jugs full of cream, the shepherd hut (after years spent quietly rusting away in field corners) has become the latest comeback in the vogue for rural things in fresh settings. Its modern makeover, however, masks a history that amounts to a snapshot of rural life from the 18th to early 20th centuries.

Sheep seem quite haphazard animals, but on the chalk downs of southern England from the 16th century on, management of them took on an almost military level of precision.

The technique was so successful that it endured for centuries. The sheep roamed over the turf during the day but were rounded up by the shepherd into folds every night, where they might be fed on more nutritious fare such as clover, turnips and kale.

All the while, the animals dutifully fertilised the soil, one parcel at a time, until the grass was grazed and the shepherd would move on to pastures new. It was an ingenious way of applying farmyard manure to the downs so that wheat, barley or oats could be grown in subsequent years in otherwise thin soils.

On farms where the distant pastures were not accessible enough for the manure wagons to reach them, the shepherd’s flock and the shepherd himself became an invaluable resource, so much so that this method of grazing and then enriching the soil earned the sobriquet of “the Golden Hoof”. It was a system that lasted into the early twentieth century.

As one of the most important workers on the farm, the shepherd would have to move with the flock regularly from one field to the next and as a consequence of this need, the shepherd’s hut arose - essentially a well-appointed, durable shed that could be moved around on cast-iron wheels drawn by horses.

Inside the hut were a stove and a straw bed. The bed would be set over a cage where lambs could be looked after during the shepherd’s busiest time of the year. There would also be room for storage of the shepherd’s potions, food and drink. It may have been small and spartan by modern standards, but the average shepherd’s hut was comfortable for its time.

Comfortable enough, indeed, to give historians an ample hint about just how important a member of the farming community its occupier was.

Although the height of sheep farming on England’s chalk downs was in the 18th and 19th century, a recognisable description of a shepherd’s hut turns up in a late 16th-century book, The Government of Cattle, written by the chief farrier to King James I, Leonard Mascal and published in 1596.

“In some place the Shepheard hath his cabbin,” wrote Mascal in a passage that deals with sheep husbandry, “going upon a wheele for to remove here and there at his pleasure.”

Adverts from the 19th century show how the form remained roughly the same for hundreds of years, despite numerous manufacturers. The structure featured a wooden or iron chassis, with sides of interlocking larch or spruce planks. Sometimes the roof covering would be constructed from felt and tar and insulated with lambswool, but most appear to have been clad in corrugated iron.

Not only was the design durable, but the idea was enduring. On more rugged ground, traditional shielings (stone huts associated with the semi-nomadic transhumance system of cattle farming) were built on high commons over the villages and townships of northern Britain.

While the shielings were all but gone by the 18th century, the shepherd’s hut proved more durable, surviving until the mid-20th century, when it was finally seen off by military and civilian technology.

Vast changes in agriculture were kickstarted by the First World War; the manufacture of explosives had a spin-off in the industrial production of ammonium nitrate - a cheap chemical fertiliser that could turn meadows into fertile arable land more quickly than a roving flock of sheep.

After the 1914-18 conflict, home-farmed lamb faced competition from cheaper foreign markets and by the Second World War, when the Home Guard were using their huts as outposts, wandering shepherds were already something of an anachronism. The age of the Golden Hoof was over.

Once intended as an efficient, no-frills space, this simple design has turned out to be the perfect base for a garden office, a playroom or a den. Perhaps it’s their unique romantic, rural appeal, but shepherds’ huts have captured the imagination of families who want to free up space in their homes. Park one of these in your garden, sow some wildflower seeds around it, hang up some bird feeders and create an oasis of rustic charm at the end of your garden path.

What pleases the heart and rests the soul can make sense to the head as well. With property prices perennially high, garden rooms are a far cheaper option than moving to a larger house and can be used as summer houses or as cosy, quirky guest bedrooms, as studios, dens, retreats or garden offices.

And you almost certainly don’t need planning permission to put one in your garden - though it’s always best to check with your local authority first.

What’s more, while garden rooms typically add 5% to the value of your property, if you have found a shepherd’s hut that you really love, you still have the option of taking it with you if and when you move.

And it needn’t just be you that enjoys your shepherd’s hut. They make ideal ‘glamping’ pods for those with nostalgic or quirky tastes and needs in their holiday accommodation, though this has planning implications.

You may even discover that by parking one at the end of your garden, making a beautiful natural haven around it, filling it with gingham and Cornish Ware and letting it out, it draws others into a rural idyll we all desperately crave.

Erstwhile non-fiction author, ghost & freelance writer for others, finally submitting work that floats my own boat, does my own thing. I'll deal with it if you can.

More stories from Ian Vince and writers in FYI and other communities.