Did You know? - Vicious Venoms 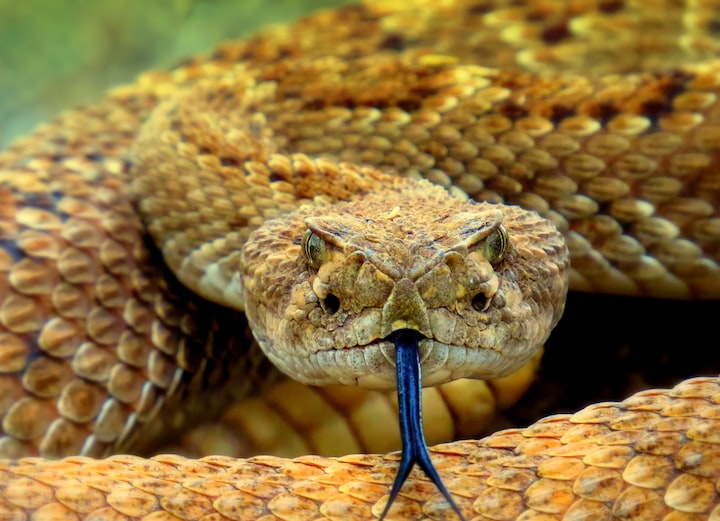 Some animals run fast to catch their prey or escape predators. Some have wings, while others use their sharp claws and teeth to defend or catch their prey. Toxins are no different: they can be used both to subdue prey and to defend themselves.

Zootoxins are deadly substances, even a small dose can cause death. Venomous animals inject their toxins into their victim’s body via fang, stinger, or spine - such as bees, wasps, and some reptiles –. However, poisonous animals can only exert their toxic effect passively. This means, their tissues need to come into contact with another living organism either by touching – like Poison dart frogs, Salamanders, or the Hooded pitohui – or by eating it – like the Monarch Butterfly –.

How dangerous are bees?

To most humans, the sting of bees and wasps only causes mild pain and swelling on the skin that usually goes away in a matter of days. However, some people are more sensitive to bites which can result in death. In the United States, more insects caused fatalities than venomous snakes.

But not just bees and snakes are dangerous: The hair of some caterpillars – Puss moth caterpillar – contains toxins which have sent many people to the ER.

Assassin bugs inject venoms with their needle-like mouth into the victim’s body. The bite of some ants – Bullet ants and Fire ants – is more dangerous than of bees or wasps.

Only female bees, wasps, and ants bite. They can use their sting several times, except honeybees - Honeybees can only do it once to mammals and humans because when they use it, the sting is torn from their bodies.

Do Black widows eat their partners?

Only a few species of spiders are dangerous to humans, but the most famous of them all is the Black widow. Female black widow bites are extremely painful but rarely fatal. Males are smaller than females and are harmless.

In nature, male black widows are very careful about approaching the females – If a male is poking around the web during mating season and his lady is hungry, they can easily become dinner. After mating, the males try to get away as fast as possible. They only become dinner, if they are slow or too weak to escape.

Why do scorpions pinch?

The scorpion’s weapon is already formidable by just looking at it: a pointed hook-like stinger located at the end of a long, curved tail. Out of their 2,500 species, only about 25 have venom capable of killing a human – the most venomous ones are the fat-tailed scorpions –. They live mainly in hot and dry places and are extremely resistant – they can withstand significant radiation. You can also find them in the dark. Just turn on your UV light and these scorpions light up and glow like stars in the sky.

Another distinguishing feature is their grasping pincers which they use to restrain and grab their prey. Scorpions are preyed on by larger animals – such as meerkats, mice, shrews, and various birds –, so they use their defenses to protect themselves.

What are the world’s deadliest snakes?

Out of the 3,500 snake species, there are about 600 venomous and only a third can are dangerous to humans. Many of them are native to Australia, which is the only continent that has more venomous snakes than harmless ones.

Rattlesnakes, vipers, cobras, mambas, coral snakes, water moccasins, pit vipers, bushmasters, and death adders are all venomous, but not equally dangerous. The Inland Taipan is considered to be the most venomous snake in the world, due to its drop-by-drop concentration of venom.

The 4-meter-long (13.1 ft) King cobra is the longest venomous snake in the world, but they can grow up to 5.85 meters (19.2 ft). The adult snakes produce enough venom to kill up to twenty people!

The primary role of snake venom is to paralyze and kill prey animals, but snakes like the Spitting cobra use their venom primarily for defense.

Venoms from the Sea.

Several venomous animals live in the sea – such as scorpionfish, lionfish, rays, sea urchins, and the Portuguese man o’ war.

Scorpionfish – such as the dreaded Stonefish – have venomous spikes. Sea anemones, jellyfish, and fire corals sting their prey, while sea urchins and rays produce deadly venom to protect themselves. The Portuguese man o’ war uses its half-million nematocysts (the cells on their tentacles) to paralyze their victims. The majority of sea snakes are highly venomous; however, they usually don't inject venom when biting.

The Komodo dragon is the largest lizard in the world, they can grow to a maximum length of 3 m (10 ft). This dragon is a monitor lizard found in some Indonesian islands. Due to their size and notoriety, these vicious predators became ecotourist attractions which helped raise more awareness of these endangered species.

For a long time, scientists thought that Komodo dragons kill their prey via blood poisoning caused by the multiple strains of bacteria in their saliva. This proved to be a fairy tale, researchers discovered that these reptiles possess a venomous bite: they found venom glands in the animals’ lower jaws. These glands release a nasty cocktail that lowers blood pressure, causes blood clotting, muscle paralysis, and tissue damage with excruciating pain. Even large animals like buffalos don’t stand a chance.

Which animal uses insulin as a weapon?

Cone snails are one of the deadliest animals in the world. These animals use their venomous tooth as a harpoon-like structure for predation. When the snail detects a nearby prey, it extends the hollow and barbed tooth with a powerful muscular contraction and loads the victim with venom from its glands.

Some cone snails release an insulin cloud into the water when an unsuspecting prey swims past. The insulin gets into the bloodstream through the gills, bringing the fish into a hypoglycemic shock. These creatures are the only animals in the world – other than humans – that have been recorded to use insulin as a weapon.

What is a Gila monster?

The Gila monster is one of only a handful of venomous lizards in the world. These creatures have short legs, chunky bodies, and strong, fat tails which serve as a storage-locker – they can survive for years on the stored fat in their tails. Despite beliefs, these reptiles don’t spit venoms or kill humans with their breaths. Their bite is painful which rarely causes death.

The scales on the body do not overlap and contain little pearl-shaped bones. Their salivary glands – which produce venom – are located in their lower jaw. Due to their slowness and bad eyesight, they need to sneak up on prey and bite them before they get away. These stocky creatures feed on eggs, birds, insects, and rodents.

Which animals are immune to venom?

The scorpion’s sting, the rattlesnake’s bite, and the spider’s deadly kiss. We spend a lot of time standing in fear of the world’s most venomous creatures. But numerous mammals and birds have developed resistance to venom and many reptiles are either resistant to their own venom or prey on venomous snakes.

In the animal kingdom, venom resistance is more common in those who eat venomous animals than the other way around. For example, the grasshopper mouse can shrug off the paralyzing venom of scorpions and centipedes. Meerkats, mongooses, skunks, and hedgehogs can neutralize venoms. Honey badgers develop their immunity over their lifetime after numerous injections of venom from bees, scorpions, and snakes.

Only a few people know that opossums’ immune systems are so strong that they can cope with any snake venom. This is due to a toxin-neutralizing protein in its body, which can locate and neutralize deadly toxins in the body. The most surprising thing about this ability is that it can neutralize snake venoms that the animal would never normally encounter – like the venom of the water snake. Scientists believe this may hold the key to developing a universal antivenom.

The healing potentials in poisons are being researched by many scientists around the world, as certain animal toxins have healing powers and can cure many illnesses.

In the 1960s, a doctor realized that the venom of the Malayan moccasin may be suitable for preventing deep-vein thrombosis. Some scorpions that deploy toxins are becoming more and more important in the fight against cardiovascular disease, diabetes, and cancer. Bee stings have some benefits as well as the toxins in their venom (melittin) have anti-inflammatory properties and may help in our immune system. Some studies show, that it may prevent HIV. Researchers have developed a painkiller from cone snail venom that is 1000 times more powerful than morphine. A Komodo dragon-inspired synthetic peptide DRGN-1 is effective in killing drug-resistant bacterial strains.